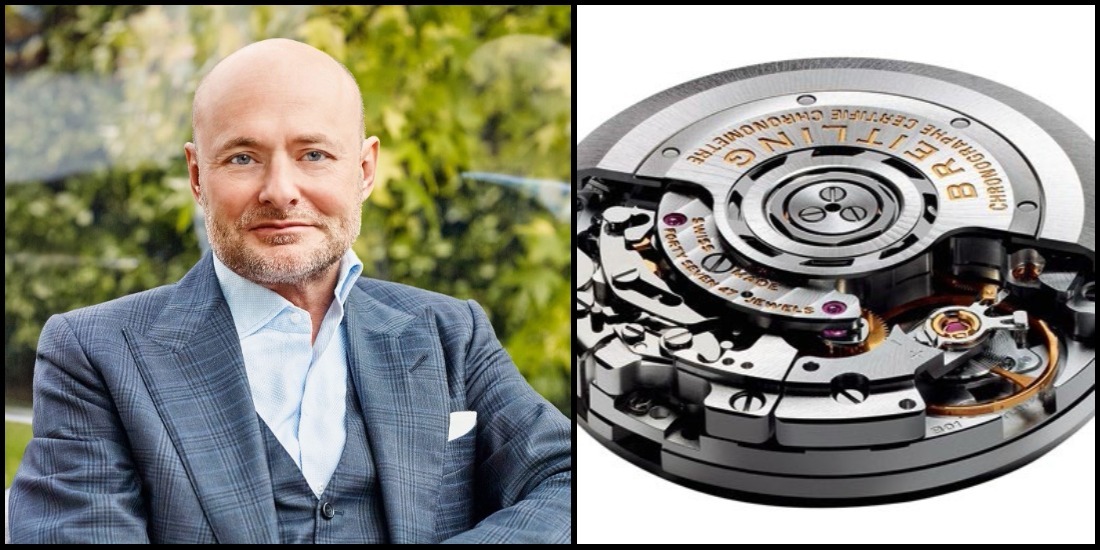 Breitling has just organized a traveling exhibition retracing its history since 1884 : which do you see as the most important decade of this retrospective ?

Picking a single decade would be too restrictive, as we already found it incredibly difficult to pick just 60 models reflecting Breitling’s heritage for this roadshow. But if you ask me which period appeals to me most, I’d say the 1940s and 1970s, and especially the late 60s and early 70s which I regard as the golden age of the brand : the watches are superb ; they have a unique look with their orange accents, the atypical shape of the cases, the integrated bracelets.

The Premier collections from the 1940s and the RCAF model from the 1970s appears to have been the most classic-looking : do you see any development potential there ?

Huge ! We are indeed going to launch an elegant watch in the second half of the year inspired by this type of design, since it has meanwhile vanished from the range. Breitling is basically positioned in the range of watches retailing for between CHF 3,000 and CHF 8,000-9,000, which is where we plan to stay. We are ceasing production of the most low-end quartz models – except for watches with applications for professionals – and we are not moving towards Haute Horlogerie, apart from a few limited series for boutiques. We will of course maintain the foundations on which Breitling’s strength has been built, with pilot’s watches and large-size models, particularly in the USA where we rank fourth in this segment. However, I want to offer classic pilot’s watches inspired by the 1930s and onboard instruments, as well as watches with a nautical DNA such as the Superocean Héritage, a very traditional-looking model with its Milanese mesh bracelet. Bear in mind that the latter is both the most classical model in Breitling’s recent history and our 2017 bestseller ! This proves that tastes have evolved, that people want more discreet products, and we must take account of this market reality.

Two of the main focuses of your exhibition are innovation and design, the very values touted by almost every brand : how can you stand out ?

Sure enough, everybody likes to stake those claims and I’m not a historian myself, yet Breitling actually has one of the most prolific historical catalogs in the industry, as indeed confirmed by both auctioneers and historians. Breitling’s heritage is phenomenally rich. We are going to issue authentic re-editions, and personally there are around 20 to 30 that I would like to revive. I have seen a lot of brands in my career, and with most of them I would be hard-pressed to find five models that could be successfully re-issued

How does Breitling square up with the world leaders in the field of luxury sports watches ?

It’s important to recall that Breitling has invented almost everything in this segment. The chronograph would be virtually inexistent without Breitling. Our exhibition presents one of the first wristworn chronographs, a monopusher chronograph dating back to 1915. One all too often forgets that the first Swiss chronograph in space was worn by John Carpenter and that it was a Breitling. The same goes for ladies’ watches, an area in which Breitling enjoyed significant success, especially during the 1990s and 2000s, that was really impressive ! As of this fall we will be offering women’s watches aimed at renewing ties with this audience. We naturally need to devote attention to steering Breitling’s transition and transformation, but we are presenting our two to three-year vision to our retailers, who greatly appreciate this transparency and are very much on board with our plans. Their enthusiasm is extremely energizing and enables us to work effectively together.

You have reminded us that Breitling’s expressive territory is not confined to the air, but also encompasses land and sea : which partnerships will help underline this fact ?

Breitling’s previous communication essentially focused on aviation, yet taking just the example of the Superocean Héritage, one can see that it has always been a diver’s watch rather a pilot’s watch. This model is inspired by a 1957 model with a superb design ! Breitling has always been a more all-round brand that is in fact also linked with the automotive world, as proven by the partnership with Bentley. We have also established ties with the Concours d’Elégance Suisse and with Norton, the world’s oldest motorcycle company. Meeting our growth objectives implies exploring other territories. That means land, as just discussed, as well as the sea – starting with the Ocean Conservancy, an American NGO which is fighting to rid the oceans of plastic. This corporate social responsibility operation is the first step in this direction.