In the garden of vanities 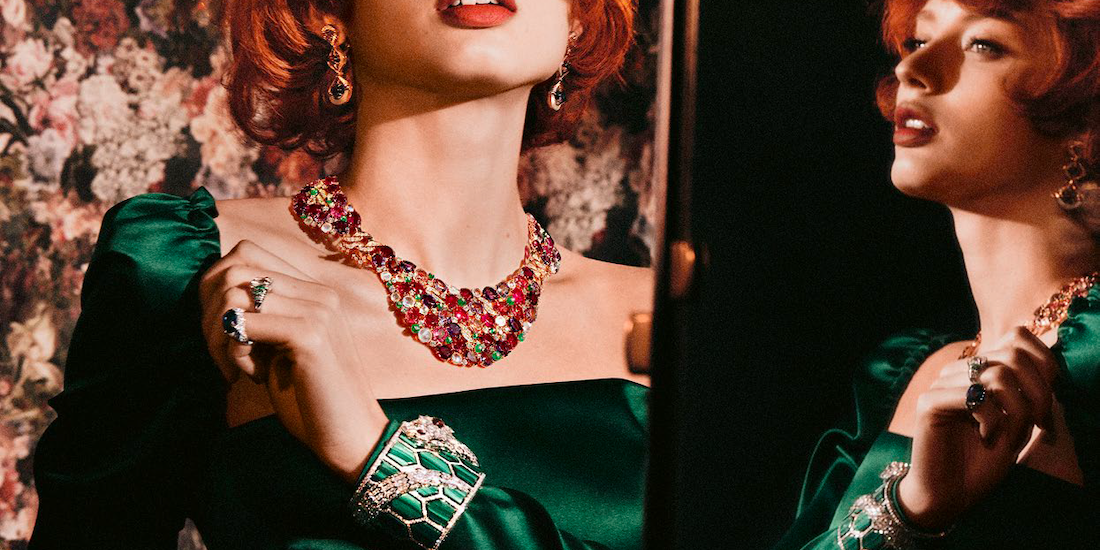 Green gemstones are among the most sought-after in the world. The love of tsavorites, peridots and of course emeralds reveals a taste for luxury, as well as an aspiration to immortality.

Χinema is bringing the evil sorceress Maleficent back to life : when she tries to rebel and her green ring begins to shoot lightning bolts, the kingdom (and us !) will need to watch out. Let us avoid being caught between the fronts, especially if the forces of nature also play their part – as they did 65 million years ago, when water and fire forged emeralds whose deep green is a promise from paradise. Discovered by the Egyptians, adored as a talisman by the Romans who believed that the gem changed color when a person uttered a lie, this stone comes from mines, of which the most important – discovered by conquistadors in search of Eldorado – are now in Colombia and Brazil. Admittedly, the Emerald City exists only in the Wizard of Oz, as well as in a recent interpretation showcased in Bvlgari’s Cinemagia collection as an eponymous necklace graced with a 21.49-carat emerald center stone.

On the other hand, the well-known term ‘emerald gardens’ refers to jewelers’ name for these gems’ characteristic inclusions, revealing miniature landscapes of exquisite beauty that betray the origin of the stone. Emeralds are classified into various categories according to their hue, saturation and clarity. Dark green stones with intense color are rare and much coveted. “Fura” is the largest uncut emerald in the world : it weighs more than two kilos and is priceless.

Fashion designer Coco Chanel was also a priceless and multi-faceted ‘gem’ who valued costume jewelry as much as real jewelry and enjoyed wearing them both at the same time. In the course of her unconventional life, Mademoiselle Chanel took a succession of lovers that could be counted off like a string of pearls. One of them, Grand Duke Dmitri Pavlovich, cousin of Tsar Nicholas II, introduced her to the Baroque aesthetics of Russia, which her eponymous Maison is now honoring with its current high jewelry collection Le Paris Russe de Chanel : superb double-headed diamond eagles, radiant sun medallions, motifs of tourmaline green young wheat stalks and Folklore models resembling a laby-rinth dotted with multicolored stones.

Gucci designer Alessandro Michele has ventured into the Hortus Deliciarum. For some, it is a splendid work of medieval monastic literature (the Hortus Deliciarum is a 12th century encyclopedia) ; for others, it has now become of eccentric body ornaments. Indeed, Michele creates jewelry that would have suited both the Borgias and the Kardashians : objects of devotion such as crosses and hearts pierced with arrows (to Cupid’s delight) combine to create a bestiary of lions swallowing precious stones, fabulous half-whale, half-panther-like animals that look more like punk accessories. The poetry of Gucci’s very first Haute Joaillerie collection resides precisely in this clash of cultures and centuries. It comprises no less than two hundred models, many of them freely adapted from the motto : “More is more and less is a bore.”

There is also no skimping on jewelry when it comes to red carpets, albeit the latter are becoming increasingly green thanks to the Swiss jeweler Chopard, which has decided to adhere to the principles governing sustainable and ethical sourcing of gold and precious stones. In 2016, Caroline Scheufele entered into a partnership with Gemfields, the world’s largest producer of colored gemstones, and presented a special “Green Carpet” collection using responsibly sourced emeralds. In 2019, however, the annual Red Carpet collection exercises its seduction through the theme of love, notably highlighted in an extravagant set composed of a necklace and earrings studded with sapphires, amethysts, garnets, topazes and tsavorites.

It certainly took a passionate enthusiast of chivalry novels to create Francesca Amfitheatrof’s “Riders of the Knights” jewelry collection for Louis Vuitton. The talisman amulet, with its central lapis lazuli medallion surrounded by two rows of 70 sapphires and 100 emeralds, required months of work. The designer also plays in an equally virtuoso way with graphic lines and architectural forms whose aesthetic components recall medieval fortresses with their drawbridges, harrows and chains.

Love was also at the heart of the creative process for French jeweler Van Cleef & Arpels : Romeo and Juliet, the world’s most famous pair of lovers, is now definitively immortal. The destiny of these two young sweethearts is played out in gardens brimming with precious stones whose flamboyant walls shelter their secret. More than 100 figurative and abstract pieces touch the heart, as does the balcony scene where fate takes its course and Juliet cries out : “It was the nightingale, and not the lark, that pierced the fearful hollow of thine ear.” Meanwhile, a spirit of steadfast love is conveyed through the deep green of the Colombian emeralds creeping like ivy across the balcony.

Each of these stories thus concludes with the green stone of hope which we would all like to believe places the wearer under divine protection. Perhaps Maleficent, the fallen angel, will end up turning into a good fairy ?