Unique pieces : Fruits of the look 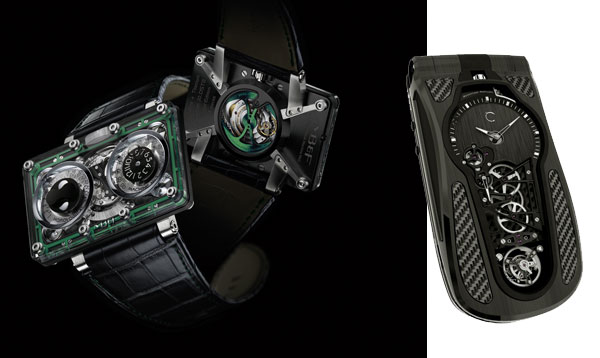 Gemsetting is a rare enough feature on Richard Mille watches to ensure it cannot be regarded as a mere cosmetic touch of added value. The origins of the inspiration behind this new tourbillon set with precious stones go back to the timeless themes of nature, the evolution of time, and the goddess Gaia. The serpent’s association with the realm of good or evil varies according to different beliefs and mythological interpretations. The positive properties of the pure black onyx composing the baseplate of the RM 026 divert it from the dark side of the force and endow it with a protective mission. Coiled around the precious tourbillon, these two snakes – one set with diamonds and rubies; and the other adorned with diamonds, emeralds and a red coral tongue – symbolise the all-powerful guardians of a treasure to be protected and revered. Above and beyond such metaphors, the complexity of the case calls for 255 cutting operations; the dynamometric crown is associated with a safety system serving to avoid any forced winding; and this 15-piece limited series in white gold boasts a new power-reserve display using a differential system directly linked to the barrel featuring a red line indicating the available autonomy (between 10 and 11 o’clock). As on all RM watches, the sturdiest materials are given pride of place right through to the heart of the movement, including a ceramic endstone for the tourbillon carriage, grade 5 titanium bridges and interior flanges in carbon fibre with diamond hour-markers. All the movement parts are enhanced with hand finishing. How can one resist biting into this particularly tempting fruit?

Another enthusiast of radically daring structures and modular constructions, Max Busser had caused a sensation in the rarefied spheres of contemporary fine watchmaking with the transparent rectangular case of the HM2 SV. The latter’s complex three-dimensional shape had pushed sapphire technology well beyond its generally accepted limits. As he himself admits, however, “all good things come to an end, and after three years of success, the Horological Machine N°2 takes one last bow on centre stage with two 18-piece limited editions, each fitted with a sapphire case: the HM2-Black SV and the HM2-Red SV punctuate with panache the HM2 collection, which will thereby maintain its exclusive aura”. Among the eminently respectable friends who have contributed to this monument in sapphire, gold and titanium, Jean-Marc Wiederrecht developed the motor, framed by an electric green rubber gasket and representing the world’s first mechanical movement to offer an instant hour jump, concentric retrograde minutes, a retrograde date, twin-hemisphere moon-phase display and automatic winding – all based on a patented mechanism featuring particularly low energy-consuming asymmetrical-tooth gear wheels. Moreover, to optimise the efficiency of the iconic battle-axe shaped automatic rotor, one of the two 22-carat blades measures a razor-thin 0.22 mm. The 349 movement parts are cleverly accommodated within the 120 parts composing this incredible case.

GMT readers discovered the first micromechanical cellphone with a flying tourbillon exactly one year ago in the Baselworld issue. A few deliveries on from there, LeDix is celebrating its first birthday with an 18-piece limited edition in black PVD-coated titanium with carbon fibre inserts. Beneath the almost anachronistic-looking notched crown lies the famous “Remontage Papillon” or butterfly winding inscription referring to the famous patented system housed in the hinge of this communicating timepiece and which supplies the watch movement with an additional three hours’ power reserve every time the cover is opened. The particularly off-centred (far more than any other on the market) flying tourbillon is mounted on shock-absorbers. This nomadic object takes on its full meaning when held to the ear in order to revel in its gentle ticking sound. Over 600 parts sing the praises of Swiss Made micromechanical expertise, even in unexpected places such as the cushioning device for the phone’s top cover, the battery-ejection system and the rotating protective dust cover for the main connector. So how does the owner feel with such a UFO in his pocket? Doubtless filled with an imperious desire to escape from daily routine….