At home with Anita Porchet: Daughter of fire 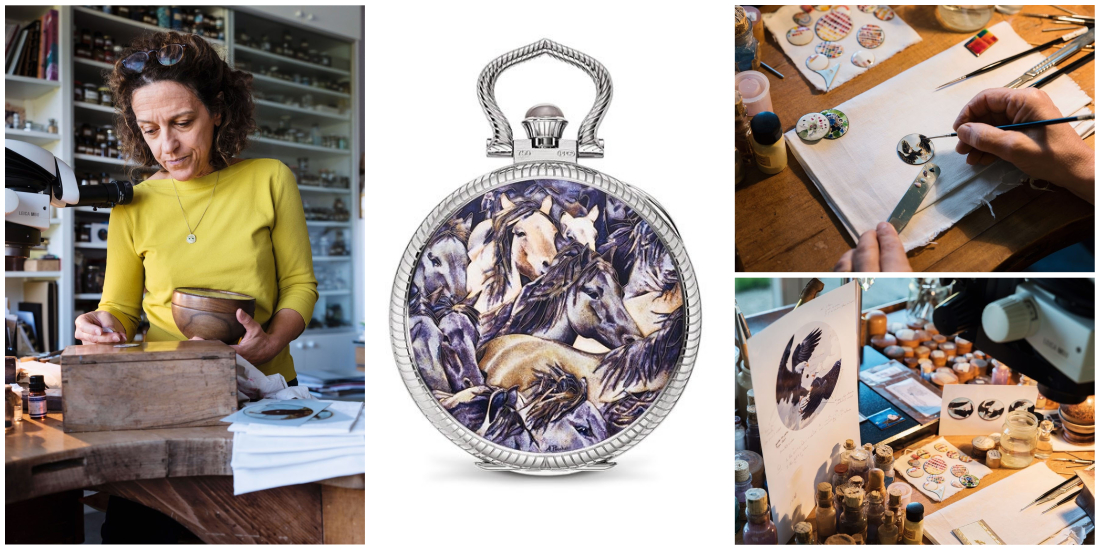 The shelves are stacked with hundreds of bottles filled with blocks of colored glass. Memphis blue, Alexandra blue, opaline red, otter gray, vampire gray, rosehip pink are names dotted around like the many hues on Anita Porchet’s palette. The desk vanishes beneath wooden boxes containing ancient enamels ground to powder, colors spread out on tiny swatches, unbelievably fine brushes, an agate mortar. At the back of the room is an oven, and through the French doors are endless fields unrolling their green carpet. In the total silence in her workshop, enamelist Anita Porchet surrounds herself with the bare minimum. No machines. No computer. Barely a binocular microscope through which the eye guides her hand in deft moves learned from the greatest exponents of this craft, Elisabeth Juillerat and Suzanne Rohr. They passed on the mastery of glass to her and shared the secrets of fire. Sensitivity and experience did the rest. As the gifted artisan points out : “That is what is known as expertise, and it takes time to acquire.” The very first watches enameled by Anita Porchet date back to the mid-1990s. At Patek Philippe’s request, Anita Porchet produced her first dials. The most prestigious Maisons followed. Her hand became more proficient, her eye sharper, enabling her over the years to create a unique signature. From the meeting of fire and opaque glass reduced to powder and mixed with oil arose fabulous miniature paintings, reproductions of works by old masters or original creations of this craftswoman herself. Gracious motifs revealed in champlevé when the heat does its work on a gold plaque whose cavities are filled with layers of enamel fired in the kiln. Anita Porchet also does paillonné (spangling) which involves applying microscopic specks of gold leaf to the enamel. Not to mention cloisonné, a technique that allows the motif to be outlined with a gold wire finer than a hair’s breadth. The enamels are first of all crushed by hand in an agate mortar before coating the dials and firing them in the kiln. “Over the years, I have learned to hear when the grain is fine enough” explains Anita Porchet. “The same thing applies to the kiln. Each firing lasts between 30 and 90 seconds at a temperature of 800°.” Only experience allows one to time the perfect duration. A question of time and experience. The purest skill.