A bouquet of flowers in a jewellery garden 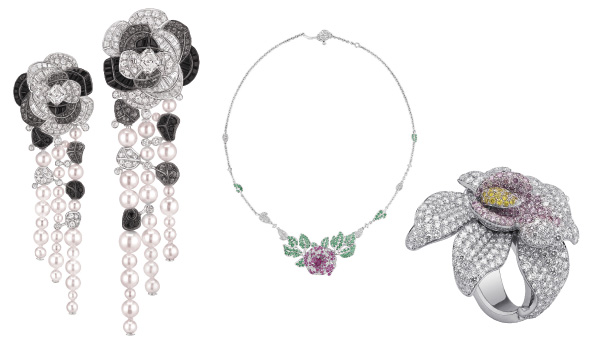 Chanel and the camellia

Mademoiselle Chanel loved the camellia flower and from it expropriated the amazing delicacy and exquisite lines from 1923 onwards. Pinned to a piece of clothing or decorating a hairdo, embroidered or engraved on a suit button, the camellia swiftly became much more than an emblematic flower. It is indeed a light, elegant signature on which Chanel continues to draw through exceptional pieces of jewelry. Between diamonds and multi-colored sapphires, opals, black lacquer, rubellites, spinels, tourmalines and enchanting pearls, the new Jardin de Camélias collection surrounds Chanel’s jewelry Eden with daring dimensions and rare gems.

Piaget and the rose

It’s the queen of the garden and jewelry’s little prince Yves Piaget completely fell in love with her. In the world of Piaget, the rose constitutes a source of endless inspiration, an uncontested muse whose variations have studded the history of the company. On the 30th anniversary of the Yves Piaget rose, laureate of the International Competition for New Roses in 1982, the brand launched the Piaget Rose collection. Sparkling, elegant and glamorous, it is once again blooming this year with precious new pieces inspired by rose bushes that intertwine and float with incredible lightness over the neckline, delicately adorn the wrist or hang from the ears like a cascade of flowers.

Cartier and the orchid

Even before the animal theme, flowers appeared in Cartier’s jewelry vocabulary at a very early stage. From 1925 onwards, in the middle of the Art Deco period, Cartier produced an orchid comb entirely set with diamonds and studded with onyx cones. While other magnificent species blossom in the garden of the Parisian company, since that time, the orchid has been a favorite flower whose sculpted petals are a source of continuously renewed inventiveness and know-how. Delicate and precious, the Caresse d’Orchidées collection reinvents this smoldering bloom that remains a graceful symbol of extreme femininity.

Dior and the rose

The links that unite Dior and the rose date back to well before the actual founding of the haute couture company in 1947. The seeds of this passion were first sown in the garden – turned rose garden – of the young Christian Dior’s childhood home perched above the town of Granville, in Normandy. These were further nurtured during his early days as a fashion designer, when he made evening gowns hemmed with splendid roses. The designer’s passion for this flower is echoed by the Dior Joaillerie collections designed by Victoire de Castellane. The Rose Dior Bagatelle necklaces shine with an enchanting sparkle, imbued with freshness, romanticism and poetry.

Chaumet and the hydrangea

Multi-faceted by its very nature, the hydrangea – a spectacular flower consisting of countless clustered blooms – has become an emblematic Chaumet plant. Through endless variations of its stylized, openworked or sculpted petals, Chaumet explores every subtlety, naturally playing on shapes, but also on a powder pink kaleidoscope alternating between sculpted opal cabochons, sapphires and pink tourmalines. An unexpected floral bouquet consisting of six High Jewelry creations, simply and logically christened Hortensia after its French name.