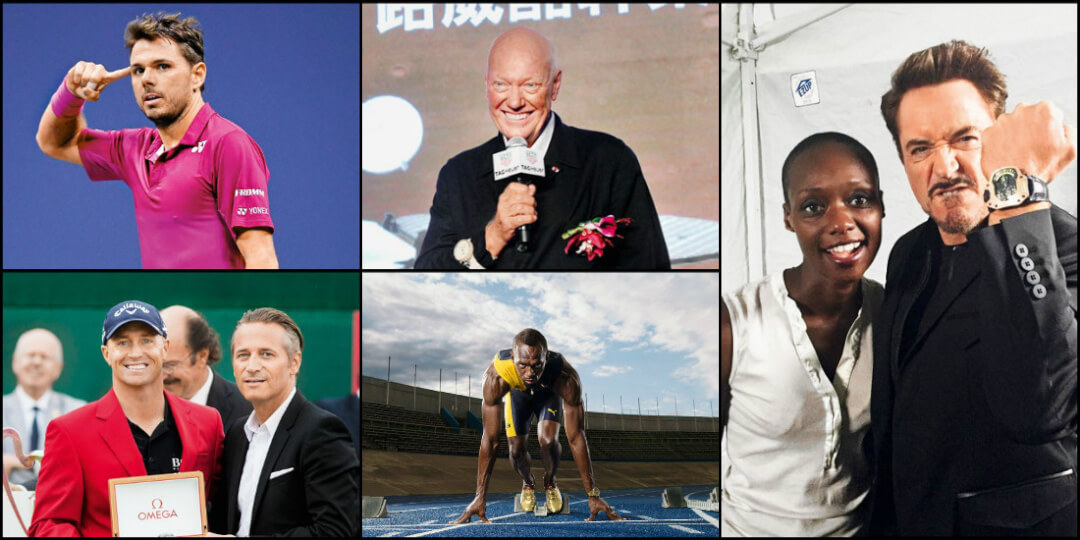 After turning down all the watches his agency suggested for his upcoming role, the exuberant actor Robert Downey Junior opted for a red gold UR- 110. Who had the privilege of personally delivering his watch to him in New York ? Yacine Sar, Communications Director at Urwerk and unconditional fan of the mischievous Tony Stark in the Iron Man trilogy. Who needs armor with a timepiece like this on the wrist ?

Anonimo and the snowman

Currently on a tour of 30 European cities with the backing of Anonimo, extreme sports film AfterForever both warms the heart and sends shivers down the spine, largely due to the spectacular performance of the American snowboarders accompanied by three Swiss riders, amid equally stunning scenery. For Julien Haenny (CEO Anonimo), “our Militare line is associated with nature and Alpine sports, driven by the brand’s inherently pioneering spirit. With the Matterhorn engraved on the back of our Alpini model, it was natural for Anonimo to support this project. When you see the film, you sense that it has been made with passion as the driving force behind the people in action as well as those capturing their feats.”

A Swedish accent at the Omega European Masters

Having barely left Rio where he welcomed nearly 1000 guests a day to the Maison Omega during the Olympic Games, the CEO of Omega – this time on home turf – congratulated the winner of the oldest golf tournament in Europe, the Crans Montana Masters, of which the 70th edition was won by Swedish Alexander Noren at the beginning of September. On this occasion, Raynald Aeschlimann presented him with a Seamaster Planet Ocean 600 M Master Chronometer in gold with a Ceragold bezel.

A Vaudois accent at the US Open with Audemars Piguet

Good things come in threes and Vaudois Stanislas Wawrinka, number three in the ATP world tennis rankings, took out Novak Djokovic in four sets at the US Open in New York at the beginning of September, making it his third Grand Slam tournament win after the Australian Open in 2014 and Roland Garros in 2015. To go with his fuchsia pink outfit and a rose-tinted world view, during the match Stan wore an Audemars Piguet Royal Oak Offshore with a dark pink custom-made strap.

Rebellion remains very much in the race

The only watch brand to possess its own motor racing team is also the official watch of the Lugaci Drive Time (see the Jet-Set article). As the two partners announced at their Swiss launch event held at the Château de Bonmont, the Rebellion RE-1 Lugaci self-winding model in forged carbon, gold and titanium, will be the “open sesame” required to unlock 3,000 exceptional cars worldwide.

With the four golds won by its ambassadors, Hublot would rank ahead of Switzerland on the Olympic medal tables. The watchmaker specializing in “fusion” firstly wagered on the “lightning” energy of Usain Bolt, who found his place in the Olympic history books by racking up a “triple triple” : three consecutive gold medals at three successive games. After Beijing and London, he won his third triple in the 100, 200 and 4 x 100m races, an unprecedented feat definitely deserved a golden Big Bang Unico Usain Bolt as a tribute to the champion. Apparently golfers risk attracting lightning, but Justin Rose of the United Kingdom caught the spotlight instead by winning the first gold medal in the discipline after 112 years of absence from the Olympics. To cement his legend, he also shot the first hole-in-one in Olympic history. Which other nation or Manufacture could possibly dream of finer ambassadors ?

On August 23rd in Beijing, TAG Heuer officially announced its partnership with China’s Mars exploration program. Jean-Claude Biver, TAG Heuer CEO and President of the LVMH Watch Division, took the stage – alongside Jizhong Liu, representing the Lunar Exploration Program and the Space Engineering Center, and Ronggiao Zhang, chief designer of China’s Mars Exploration Mission – to unveil the design of the future Mars Rover and to launch a global solicitation for the program name and logo design.

TAG Heuer has been involved in the conquest of space since 1962, when it made its first foray in this sphere on the wrist of John Glenn who became the first American to make an orbital flight around the earth. In May 2012, a Carrera Calibre 1887 chronograph was flown by SpaceX to the International Space Station. In July 2016, the brand announced an unprecedented partnership with S3 (Swiss Space Systems), as part of which the TAG Heuer S3 serves as a boarding card for flights enabling the public to experience Zero Gravity.

Meanwhile, China launched its first earth-orbiting satellite in 1970, conducted its first manned first flight in 2003, sent up its first lunar-orbiting satellite in 2007 and successfully landed its first lunar probe in 2013. As part of the mission to Mars scheduled for 2020, the Mars Rover will enable a study of its topography, environment, atmosphere, etc. “It is an honor and a privilege to support this dream, the next giant leap for mankind,” said Jean-Claude Biver.