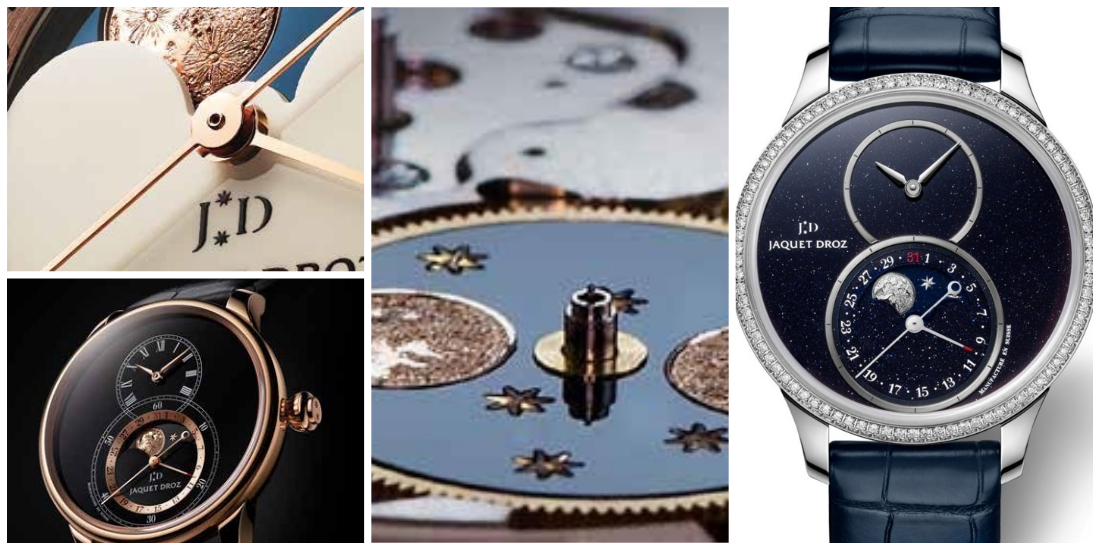 DIAMETER : 43mm (and 39mm in gemset or non-set stainless steel)

With its four new versions of the Grande Seconde Moon with astronomical moon, Jaquet Droz lends a new dimension to the stage-setting of the circles that have been sculpting its dials for 280 years. In 2018, this geometrical perfection is enriched with subtle evolutions in terms of volumes and materials, transforming the personality of this watch by means of radically different dial and case colors. In its masculine versions, the Grande Seconde Moon adorns its splitlevel dial with Grand Feu enamel : ivory colored with a white gold case, or black with a pink gold case. For the two 39mm versions, the stainless steel case is non-gemset for the model with an opaline dial and blued steel moon disk ; and gemset when framing an aventurine dial with an aventurine moon disk. The latter version stands out in two ways : it is a first ever ladies’ Grande Seconde model to feature moon phases and aventurine glass ; while its silver- toned inclusions make each iteration truly unique, thereby also rendering each of these timepieces with their shimmering dials truly one of a kind. Equally mysterious while radiating an even more distinctive character, the Grande Seconde Moon with its black Grand Feu enamel dial proudly flaunts its moon cast in the same 22K gold composing its lucky star at 1 o’clock, as well as its ring bearing the dates. With this 2018 new model liable to appeal to both men and women, poetry does not eclipse technology. Indeed, the gold oscillating weight visible through the sapphire caseback is subtly reminiscent of the Apollo moon landing module. Specially developed for the Grande Seconde Moon, Jaquet Droz Caliber 2660QL3 with silicon escapement incorporates the “135 mechanism” (for its 135-toothed wheel) internally developed to ensure a level of precision well above the average of the other movements indicating moon phases. Its discreet corrector on the caseband will need to be activated only once every 122 years to make a one-day adjustment. As the elegant Jaquet Droz slogan proclaims : “Some watches tell time, some tell a story”.