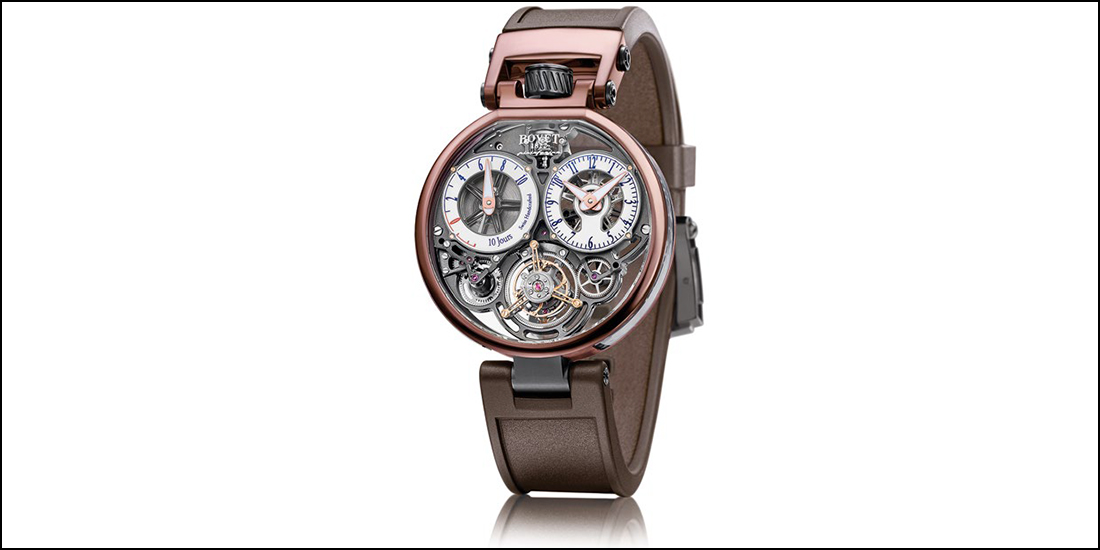 The partnership between Bovet 1822 and Pininfarina dates back to 2007, and the first timepiece embodying this alliance was born in 2010. Christened Pininfarina Ottanto Tourbillon, in reference to the 80th anniversary of the studio founded by Gian-Battista Pinin Farina, this timepiece has been followed by several other Pininfarina models, including the Tourbillon OttantaSei, launched in 2016 in a red gold, titanium and black DLC-treated titanium version, and which returns this year attired in trendy bronze and blue colors adorning a titanium case. Jointly designed by the Bovet technicians and the Turin-based designers, the case of the OttantaSei flaunts a sporty look – reinforced by the rubber strap – reminiscent of a helicopter cockpit with its sapphire crystals on both sides, as well as along its case middle. This transparency opens up an amazing 3D view of an airy movement whose organs and essential functions are displayed in three main circles. An openworked barrel and power-reserve indication at 10 o’clock, hours and minutes at 2 o’clock, as well as a double-sided flying tourbillon at 6 o’clock punctuate the architecture of the timepiece, while aesthetics and mechanics combine their assets to reveal the escapement and the sprung balance on both sides of the caliber.