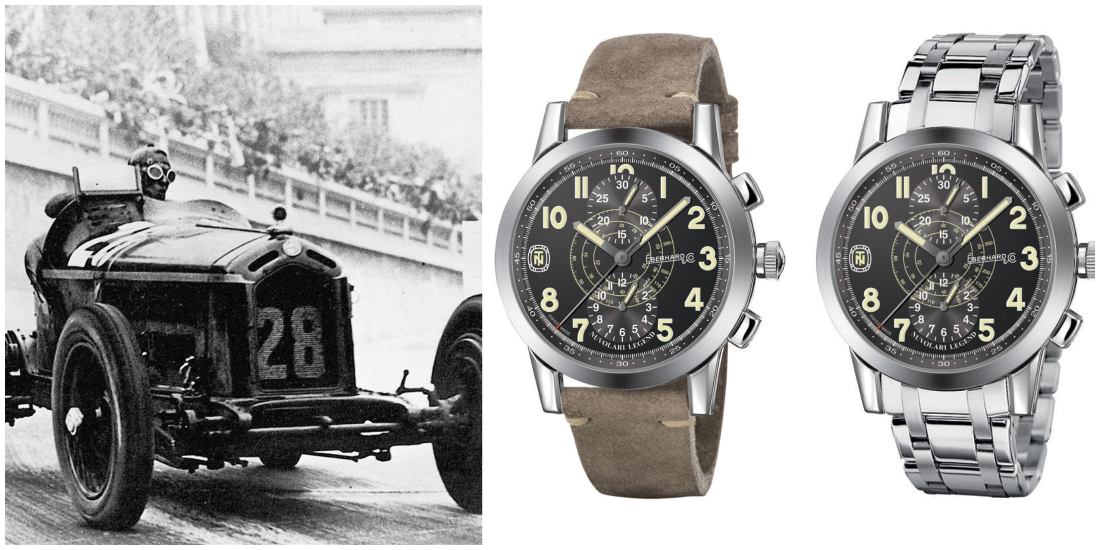 MOVEMENT : mechanical selfwinding Eberhard & Co. caliber built on a Valjoux 7750 base movement, personalized with an
engraving of the model name and a stylized depiction of the Alfa Romeo type 12/C

Since the time of its launch, the Tazio Nuvolari collection has been enriched with several chronographs inspired by the Italian champion’s victories and feats, including the Grand Prix or Vanderbilt Cup models – the latter referring to the race he won in 1936 in New York at the wheel of his Alfa Romeo Type C 36. In 2015, the 336 Limited Edition with dual-time display honored the world speed record (336 km/h) that the talented driver Tazio Novolari set in 1935 on a highway near Florence. The latest Tazio Nuvolari, announced in February at the Salon Rétromobile classic car show in Paris, acknowledges the legendary stature of the “Mantovane Volante” (flying man of Mantua). Available in two sizes, fitted with a choice of aged leather strap or steel bracelet, this vintage-look timepiece with its large luminescent Arabic numerals features an original spiral-type display of the tachymeter scale in the center of the black dial. There are numerous references to the “Maestro”, including his initials on the dial, an Alfa Romeo Type 12C from the Scuderia Ferrari engraved in gold on the back… and a tortoise on the wristband clasp. The latter is a nod to a gold chelonia tortoise that the driver was gifted by the poet Gabriele d’Annunzio and which became his lucky charm, bearing the dedication : “To the fastest man in the world, the slowest animal.”