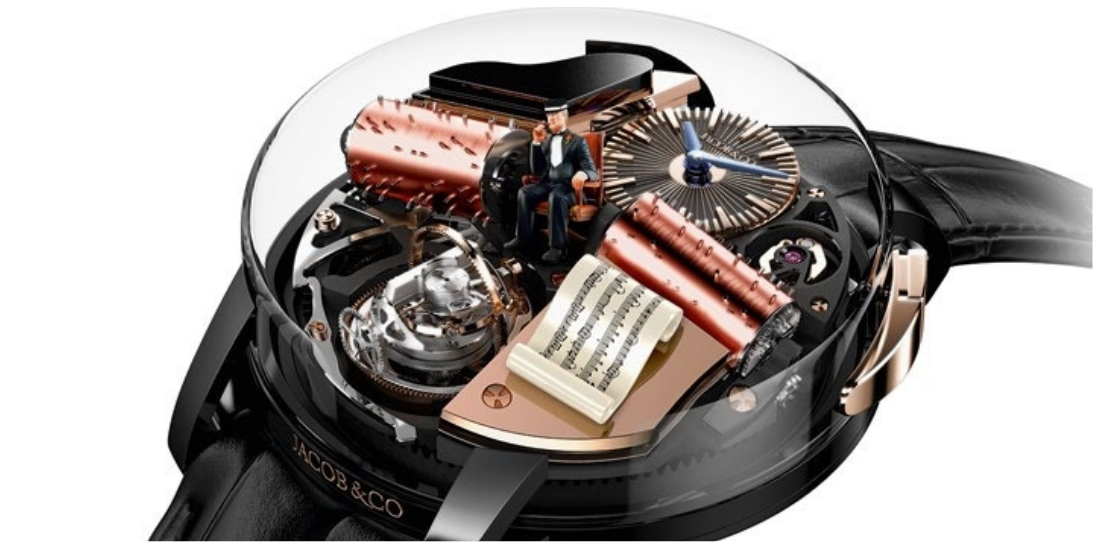 DIAL : matt black with rose gold appliques, miniatures in the center and in front of the cylinders

Join the dance. That of a Fine Watch movement keeping step with the tune it plays, body and soul. The Jacob & Co. Opera is a tri-axial tourbillon watch equipped with two music box cylinders. Their tunes combine to create a richer orchestration than ever before within a wristwatch. They are coordinated with the movement in that the caliber begins spinning on its axis as soon as the music begins. It dances on a stage composed of a large transparent sapphire dome : a giant glassbox typical of Jacob & Co. The Opera principle is interpreted in countless different ways and can virtually be made to order. All it takes is to change the cylinders as well as the figurine located at the very center of the movement which represents the theme of the song. This particular edition is dedicated to The Godfather by Francis Ford Coppola. For fans of the iconic trilogy, the tune chosen is not the main theme of the film’s soundtrack, the one where the Godfather himself, Don Vito Corleone played by Marlon Brando, dances at the wedding of his daughter Connie. It is instead the love theme, which illustrates the romance between Al Pacino’s character Michael Corleone during his exile in Sicily, and his young wife whose life was cut tragically short. An iconic movie that inspired an exceptional watch.