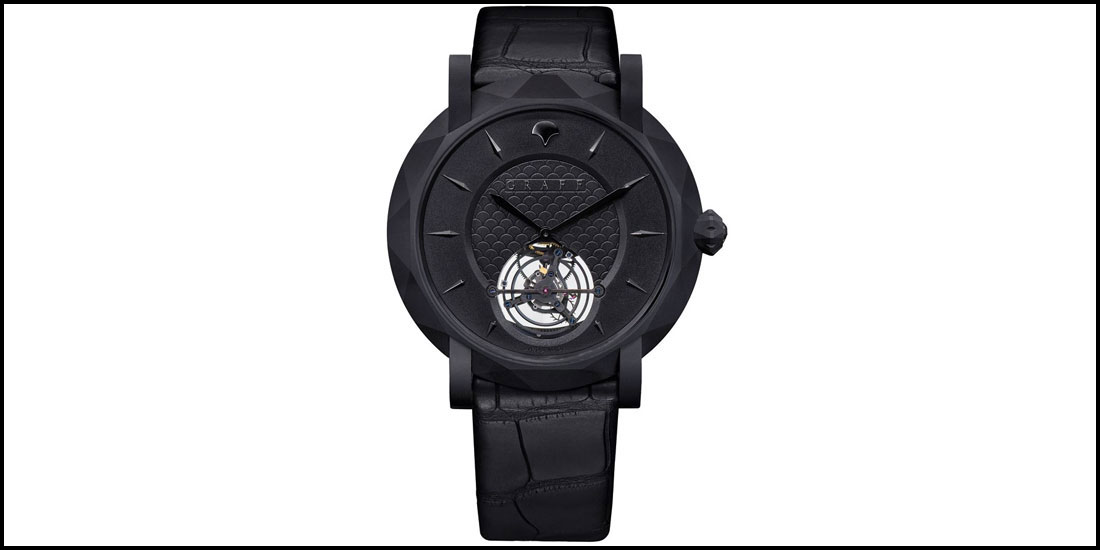 A person who has literally fingered one of the world’s most beautiful diamonds can also choose to wear the darkest and most matt-finished watch one could possibly imagine on his wrist. It would indeed seem that the favorite watch of company founder Laurence Graff is the GraffStar Slim Eclipse, a discreet, almost stealth-like, ultra-light (27g) and incredibly elegant all-black titanium and DLC model. First launched in 2015, this black interpretation of the GraffStar Slim did not create a thunderclap effect, but rather that of the phenomenon reflected in its last name. Silent, mysterious, shadowy and yet so remarkable that it has become a benchmark within the Graff watch collection. This year, the 45-gram new GraffStar Slim Eclipse Tourbillon carries the extra weight of its tourbillon, yet the latter paradoxically makes it seem lighter still. It also features the only small touches of color on this watch, the blued screws and pink jewels. Exactly like on the Graffstar Slim Eclipse, all the other elements are black, starting with the titanium DLC case topped by the brand’s signature bezel evoking the faceting of a brilliantcut diamond. Even the Graff Icon logo appearing at 12 o’clock on the inner bezel does not stand out against the dial, as the color block theme continues with the black diamond adorning the crown and the black DLC-treated tourbillon bridge.