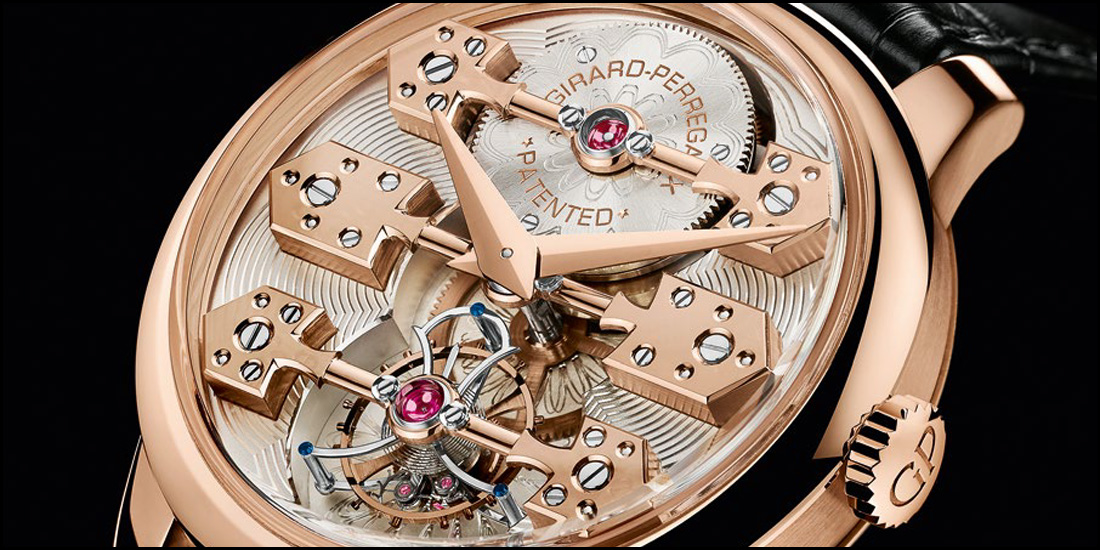 Dial : 225 dials patterns with different types of guilloché or lacquers.

Minutes scale : outside or inside ring, color, bar or dot.

Modernity ? The term is somewhat slippery and elusive. Often opposed to Tradition, it may sometimes appear destructive, yet the Swiss watchmaking spirit has a special capacity to combine these two aspects. Such is the recurrent trait characterizing the history of Girard-Perregaux which is celebrating its 225th anniversary this year.

The Tourbillon with three bridges and the Esmeralda are doubtless the most striking examples. From 1860 onwards, Constant Girard – who had acquired perfect mastery of this famous complication invented by Breguet – laid the foundations of this sense of modernism by creating a movement structure that was unique in its kind at the time. It featured three bridges symbolically stretching towards a future in which technical and aesthetic innovation were to forge this spirit of contemporary mechanics. The resulting timepiece was awarded First Prize in the 1867 Neuchâtel
Observatory Competition and retained this title for many years thereafter.

The precious metal that replaced nickel silver on the first bridges heralded the brilliant destiny of its developer. Slender, round-polished and elongated like a horological ‘Eiffel Tower’, they lightly yet firmly supported a daring, almost minimalist architecture creating a stunning stage for horological mechanics. The technical and aesthetic modernity of this exceptional movement has become truly timeless, since it is the world’s oldest caliber still produced in its original overall structure. The stunning pocket watch that won the Gold Medal at the 1889 Paris World’s Fair was given the legendary name of Esmeralda. This piece of watchmaking history is now reborn in a worthy heir bearing the name of its illustrious predecessor. The Esmeralda Tourbillon picks up the fabulous assets of the original, while fitting them in a wristwatch. A monument designed to be admired in all its majesty and splendor through the clever “chimney- style” watch glass, but above all to be worn and experienced…

After multiple prizes worn for its tourbillon with three bridges, the Maison once again distinguished itself in 1965 by presenting the first high-frequency caliber in large-scale production, operating at the frequency of 36,000 vibrations per hour (5 Hz) : the Gyromatic HF. First patented in 1957, this gem of ingenuity was to equip a number of models with pure, rounded shapes. In 2016, the 1957, a new 225-piece edition inspired by the initial models, pays tribute both to the innovative technique of its beating heart and to the aesthetic trends of the 1960s. The oval shape of the case, the lightly domed dial rim, the polished steel hour-markers : all the undeniable charm of the 1960s is there, yet the spirit governing it is unmistakably modern and adds a contemporary vintage style to the mix. The lugs are subtly beveled and the hour-markers elegantly punctuate the sunburst champagne-toned dial. Concealed beneath this golden mask lies the beauty of precision, the reason for being of this mechanical art that is never visible but nonetheless audible to the discerning ear. Watchmakers hear it and look for it like a hidden treasure. Girard-Perregaux has made this quest for precision its greatest obsession. 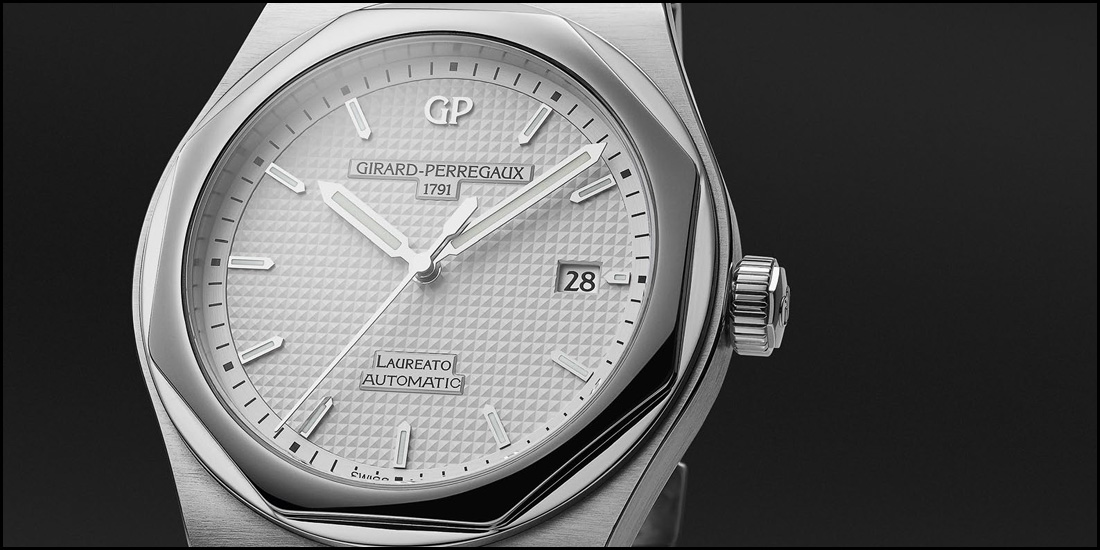 It is indeed this obsession that has earned Girard-Perregaux a string of rewards. The quest for precision continued in 1971 and led to a radical turning point involving a field in which the resolutely modern Maison would play a pioneering role. Crystal quartz vibrations sparked the dawn of a new era in watchmaking, resonating with the promise of peerless precision. The Manufacture duly 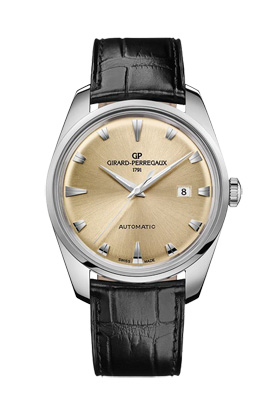 forged this magical and mineral ‘grail’ in its own image, universally establishing its frequency at 32,768 Hz thanks to its Caliber GP350.

This undeniably technical avant-gardism was matched by its aesthetic counterpart and in 1975, steel ennobled the industrial-inspired shapes to create a model with a predestined Italian name inspired by the Dustin Hoffman film The Graduate. The Laureato was typical of its era with a tonneau or barrel-type case, an integrated bracelet and a high-tech bezel featuring half-round, half-octagonal shapes. It nonetheless retained the precious nature of its origins, with gold still present in subtly accents framing a modern display of time that was more accurate than ever thanks to its new 705 quartz caliber.

1981. The Maison sensed the trend reversal with the renewal of mechanical horology. The shapes of the Laureato evolved and matured, and in 1995 Girard-Perregaux equipped it with the ultra-thin self-winding GP3100 caliber. To mark the 225th anniversary of the company founding, it was thus entirely natural to present a ‘greatest hits’ version of this legend. While conveying the essence of the 1975 and 1995 models, Girard-Perregaux expresses the inherently modern nature of this creation by playing on subtle details. The delightful alternating polished and brushed surfaces of the 1995 bracelet are combined with the dainty original bezel and the initial Clous de Paris hobnail motif of the initial 1975 version. The new model is powered by the GP01800-0005 caliber specially developed for this anniversary edition, a contemporary icon with a blue or silver-toned dial, issued, as you will by now have guessed, in 225-piece limited series of each color. 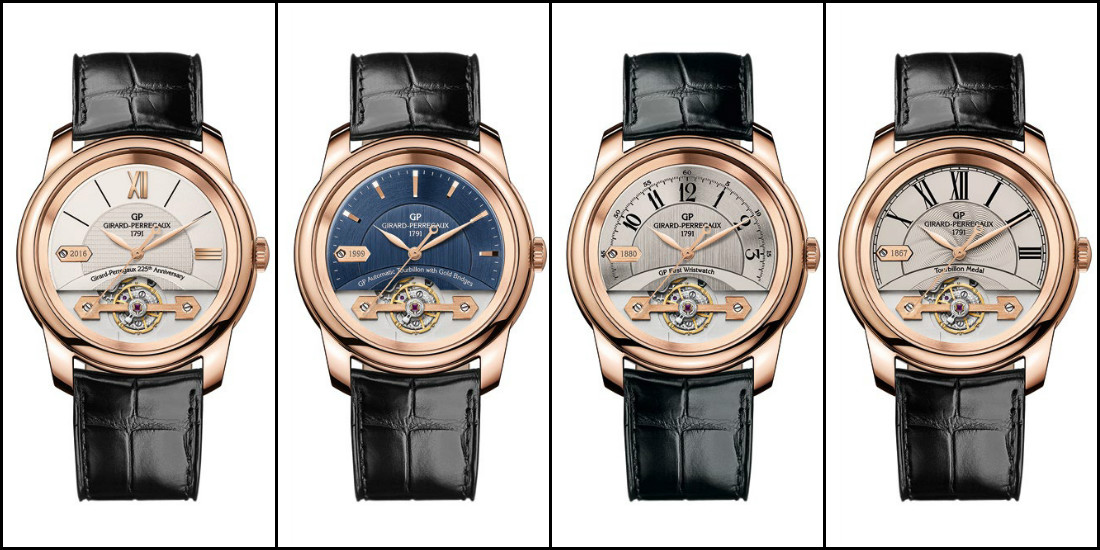 The enduring strength of constancy

Does Constant Girard’s first name have magical powers ; is it an enduring source of strength or a mantra ? Whatever the case, the innovative constancy demonstrated by the Maison is truly impressive. It is this same determination to make an indelible imprint on time that continues to drive the men and women of the Manufacture on the Place Girardet in La Chaux-de-Fonds. The quest for precision is endless, as Girard- Perregaux tirelessly demonstrates. From the Neo Tourbillon with three gold bridges to the fascinating constant-force silicon escapement, it has never ceased to surprise its contemporaries. Finding its way through the centuries and passing eras, it can proudly exhibit its past without ever falling into the trap of overly simplistic nostalgia. The Place Girardet collection is an exceptional, unprecedented and emblematic collection of 225 unique pieces. Each dial features a small golden plate engraved with a year between 1791 and 2016. At the center of the timepiece, a quote recalls a remarkable event of the year, be it in Girard-Perregaux’s history or in horology, as well as cultural, scientific or politically significant milestones starting with the founding date of Girard-Perregaux, in 1791.

In 1965, for example the Maison presented the Gyromatic HF, the first high-frequency movement beating at 36,000 vibrations per hour. In 2008, the Manufacture unveiled yet another revolutionary innovation, the “Constant Escapement”. The Manufacture further refines the personalization of each watch in this series by means of various decorations as well as differentiated hour-markers and minutes scales. In addition, a concept of 225 unique presentation boxes has been developed to mark the anniversary concept.