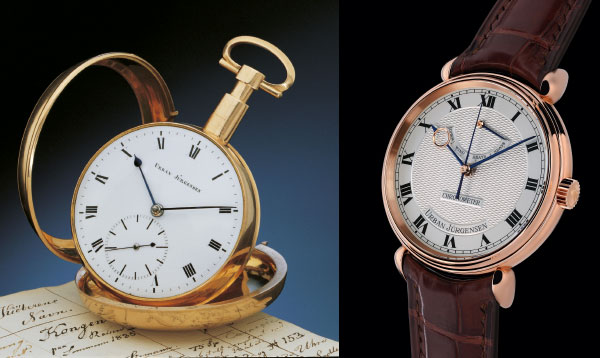 Ordered by the Danish King Frederick VI, The “Krusenstern” pocket chronometer was constructed in an unconventional way and no expense was spared in making it both accurate and beautiful. The King presented it to the Russian Admiral Adam Johann Krusenstern, who circumnavigated the world between 1803 and 1806

After the 240th anniversary of the company’s founding two years ago and winning first prize in the Men’s Watch category of the 2014 Geneva Grand Prix d’Horlogerie, Urban Jürgensen now under new management presented their new 2015 collection featuring in-house patented movements and an extraordinary patrimony of enameled dials.

The watchmaker Urban Jürgensen is counted among the Danish Golden Age’s most innovative personalities : in the 18th century he was one of the world’s most prominent watchmakers and contributed significantly to horological developments that now form the foundations of fine mechanical watchmaking. He was awarded an appointment as Royal Purveyor to King Frederik VI of Denmark and conferred the honor of the Royal Order of the Dannebrog, regularly supplying timepieces to the court and ship’s chronometers to the Danish Admiralty. A brilliant and multifaceted talent, Urban Jürgensen achieved great international acclaim for his innovations in technology and science, gaining equal status with his scientific contemporaries. As a visionary horologist, inventor and esthete, he is considered one of the greatest talents in Denmark’s history. Featuring over 240 years of culture and technology, the book “The Jürgensen Dynasty” provides the full history of a unique family of watchmakers in 368 pages.

Enameled dials have enjoyed a long history at Urban Jürgensen, where only the best enamel artisans have worked on the creation of the dials used in their timepieces through the course of more than 240 years. The secrets of enameling, from the recipe of the enamel through to the choice of hairs for the brush and the oils to mix the enamel colors with, have always been jealously guarded, despite being almost completely forgotten along the way after other techniques had come into use. Only the most important and finest watch Manufactures such as Urban Jürgensen have held on to this venerable tradition.

Also within the Urban Jürgensen collection, the artistry involved in creating hand-finished guilloché dials is highlighted by the great attention to detail evidenced in the dial layout as well as in the choice of barleycorn and checkerboard motifs. Each solid silver dial requires up to several days of over 700 manual operations involving true craftsmanship performed on a guilloché lathe. The Urban Jürgensen perpetual calendars displays a polished blued steel disk featuring two moons and a sprinkling of stars between them. The moon is depicted with pressed-in mirror-finished gold disks, while the stars are punched into the steel and and manually inlaid with gold. It takes 20 different operations to craft such a moon disk. The diamond-finished hands that require numerous hours of fine workmanship are another key feature of Urban Jürgensen timepieces. The eye of the hour hand is a concentrically polished solid gold insert, held in place by the sheer accuracy of the fit. The hands are polished to a perfect mirror gloss, and thermally blued afterwards. Models with gold cases are fitted with gold and steel hands.

Picasso never used a spray can….

As Soren Petersen says “Picasso never used a spray can”, and Urban Jürgensen will continue to guard the quality of choices in the execution of their timepieces, rejecting the quest for pointless technology implementations and remaining fully dedicated to the intrinsic value of handmade craftsmanship of the highest standards. This naturally limits volume but has ensured that the treasured small quantities produced are held by collectors and connoisseurs worldwide, and are rarely seen at auctions. Urban Jürgensen remains strategically focused on building more awareness around their history and timepieces, and are currently building out their presence in selected retailers worldwide. Building on an over 240 year-long history of uninterrupted operation, the steps being taken are entirely in line with the company’s origins and reflect a dedication to honoring timeless traditions. 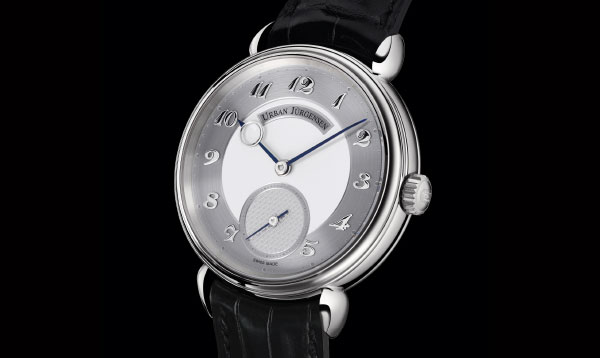