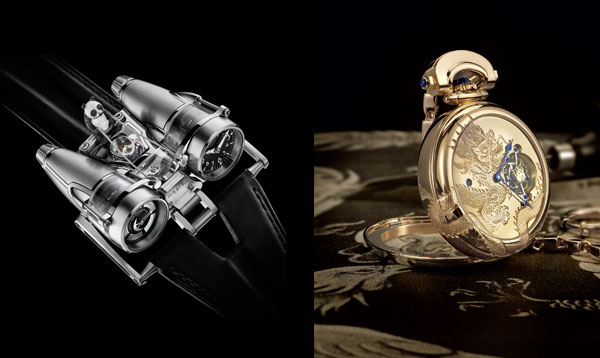 The art of measuring time and the architectural profession harbour a deep respect for each other, as the GMT architecture column also emphasizes. The jargon and construction plans that are part and parcel of each discipline are so alike that they almost merge. Many watchmaking designers have indeed worked in the architectural domain. Some individuals are unequivocally referred to as watchmaker architects, such as designer Eric Giroud, winner of several prizes and a qualified architect. The amazing architecture of the world’s great cities inspires watchmakers, such as Dewitt with its Twenty-8-Eight Horizons model echoing the art deco spirit of Manhattan, or MB&F with the bridge of its Legacy Machine LMI which evokes the Eiffel Tower.

Aren’t the case and movement of a watch in fact miniature sculptures ? They require incredibly painstaking work at every step, from design to construction, including guillochage, circular graining, setting or final assembly. As small as it is, a watch must be perfectly harmonious. Everything in these two arts is similar, from the meticulous precision of the operations to the harmony and sensuality of the shapes. The sculptural expression of time and sculptural watchmaking both achieve their full potential here.

Watches and the inexorable passing of time have often been represented – at times portrayed as the grim reaper with his sickle and an hourglass, or else as “soft watches” inspired by a camembert cheese according to Salvador Dali. Painting, and particularly enamelling on dials, holds a privileged place in the heart of a number of watchmaking manufacturers. Talented enamellers achieve works of art at Vacheron Constantin with its Métiers d’art collection, at Piaget with its orchids painted on its Altiplano collection, or at Van Cleef & Arpels with its delicate Cadrans Extraordinaires models. The Patek Philippe Museum also possesses a fabulous collection of enamels.

Like musical instruments, watches with alarms indicate the passing of the hour and the quarter hours by striking gongs. Grand Complication models are often equipped with incredible striking mechanisms such as the Westminster chime (the British parliament). Aside from striking mechanisms and the ticking of the escapement, Hublot has adopted another perspective by collaborating with the Depeche Mode group in creating a series of 12 unique watches featuring dials depicting the cover of an album made by the group, while Quincy Jones and Audemars Piguet have jointly issued a Millenary limited  edition.

Be it Charles Baudelaire’s L’Horloge or Paul Valéry’s L’Heure, there are many poets that have been inspired by and referred to time and its keepers. In literature, several of Honoré de Balzac’s characters in a number of novels wear a Breguet pocket watch. The relationship is marked with lyricism, from Van Cleef & Arpels’ fairy in their Complications Poétiques watches to the verses that are engraved on the back. With its Arceau Le Temps suspendu, Hermès also introduces a monument to the poetry of time.

Up until the 19th century, a maître à danser (dance master) was a professional who taught dancing; and the term is also used to refer to a compass used in watchmaking to measure an internal diameter. Audemars Piguet is sponsoring the renovation of the Bolshoi to which it is dedicating the Jules Audemars Extra-Thin Bolshoi special edition. A few years ago, Raymond Weil appointed famous photographer, Lois Greenfield, a well-known name in dance photography, to create its advertising campaign. Dancers who appear to be floating weightless, photographed in black and white, have remained engraved on the public consciousness. Finally, watch hands and a movement balance are often said to dance.

Aside from simple product placement, the watch plays a key role in the script of many films and is also an occasion for certain brands to develop new technologies and tricks. Of course, one thinks of Ian Fleming’s heroes, who use their Rolex, Omega or Seiko to get out of sticky situations. “The Clock”, the film by American-Swiss artist, Christian Marclay, was awarded the Golden Lion for best artist at the most recent Venice Biennial. The 24-hour-long video comprises countless film snippets selected from decades of archive material and featuring images, dialogues and soundtracks, along with the ticking and humming of  watches and clocks,  all running synchronously with real time.

To immortalise its watches and make them visible to the world, watchmakers require the talents of a great photographer.
Raymond Weil and Jaeger-LeCoultre, for example, have understood this and accordingly support photography in the world.

The legendary Eighties electronic game, Space Invaders, arrives at RJ-Romain Jerome. Aside from this invasion and the advent of digital to Fine Watchmaking dials, it is developments in watches incorporating a Smartphone that is currently sparking off a revolution. Pushing the exercise to the limits, Jorg Hysek and HD3 offer collectors a chance to display complications of their choice with a slide across the touch screen of the Slyde on their wrists. Prior to that, de Grisogono had created a stir with its Digital watch featuring mechanical indication of digital numerals.

Precision gestures and painstaking work are two of the elements shared by watchmaking and gourmet cuisine. Blancpain and multi-starred chef Philippe Rochat even made a little film on the subject. Aside from their synergies, most great chefs and patrons of the best tables have become ambassadors of choice for watchmakers, who have certainly grasped the connections – starting with Hublot, official timekeeper for the Bocuse d’Or, the world’s largest culinary competition.

Finally, designer Maarten Baas’ Real Time series explores through various creations how the acts of men, rather than traditional timepieces, show the passing of time. In his Grandfather Clock, for example, a being appears to be locked inside a clock to draw and erase the hands. Baas has also developed a Smartphone-friendly digital-display version. His avant-garde, offbeat work admirably epitomises the importance that time measurement grants to all arts.