Yvan Arpa along with another shareholder takes over the SC2 factory, the last one still present in Geneva’s town centre, which makes prototypes and small series for major brands – and thereby manages to maintain all jobs. He is pursuing the development of the Artya brand and has announced a new launch for Baselworld 2013.

Georges-Henri Meylan (centre)is eager to share his experience and his network with the Hautlence niche brand, which has entrusted him with its chairmanship and a majority stake in its capital. Along with his associates Bill Muirhead (right) and Bruno Moutarlier, he also distributes the De Bethune brand in China from the subsidiary of his MELD Holding company based in Hong Kong. Guillaume Tetu (left) remains at the operational helm of Hautlence.

Franco Cologni was distinguished at the 2012 Prix Gaïa ceremony in the Spirit of Enterprise category. He was presented with a lifetime achievement award for his entire career dedicated to Fine Watchmaking – of which the administrator of the Richemont Group has consistently promoted the international reputation and influence, while also advocating a cultural approach to the 12th Art.

Pascal Raffy has found a twin growth engine for his Bovet brand through a strategic partnership with DKSH, which opens new doors in Asia while also acquiring a 20% stake. Since 2001, Pascal Raffy had made substantial investments in the company’s production facilities while also treating Bovet to a museum set up in the chateau symbolising its origins.

Didier Decker joins the ranks of “small is beautiful” enthusiasts : after 15 years with the big Geneva brands, he has become CEO of the young Neuchâtel-based Heritage Watch Manufactory, created in 2010.

At the start of October, Amélie Lefévère (ex-Piaget) was appointed CEO of Montres Journe by its President, François-Paul Journe, who intends to devote himself entirely to his many development projects. 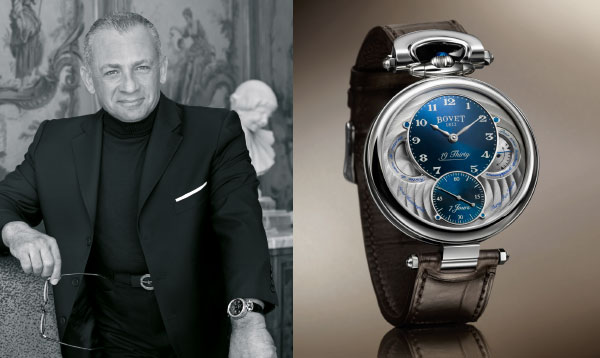