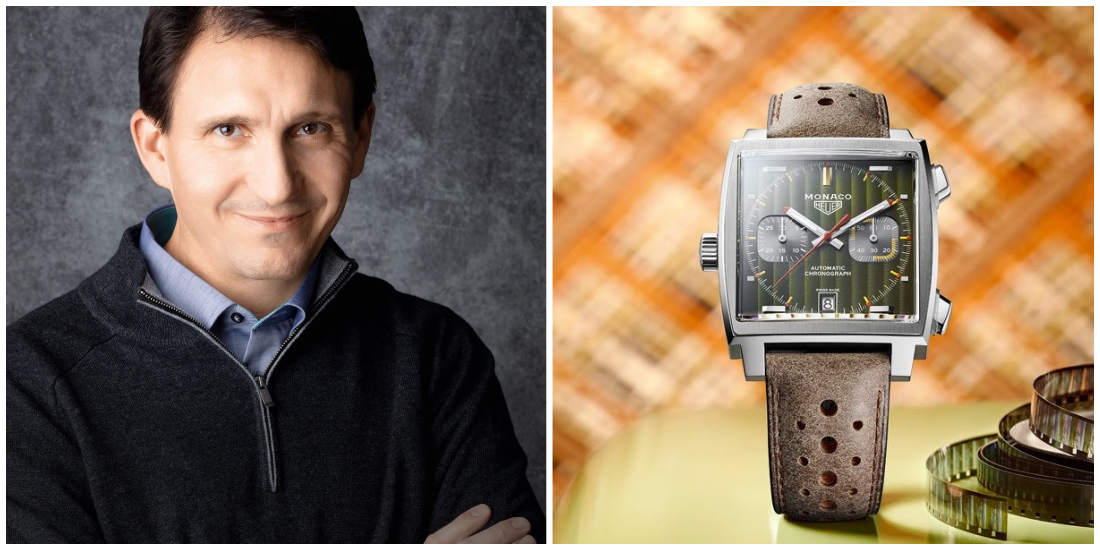 TAG Heuer is celebrating the 50th anniversary of the Monaco this year ; what do you as a designer see as most important in this legendary collection ?

All designers dream of working on a ‘form’ (non-round) case, and that of the Monaco is really very appealing. In particular the amazingly angular 1969 edition, which is incredibly effective even without the refinements we would make today. Its raw strength is softened by the interaction between the curve and the rounded contours of the sides, resulting in interesting effects that draw the gaze of both discerning connoisseurs and novices. On the one hand, the simple and strong ergonomics of the pushers, as skillfully integrated as are the dial appliques ; and on the other hand, a circular satin finish on the round part of the caseback. The result is more subtle than if it were a rectangular block, while maintaining its power. Monaco had everything it needed to become iconic in 1969, and to remain so 50 years on.

The anniversary commemorations will be punctuated by five limited series ; can you tell us more ?

This is indeed what TAG Heuer announced at Baselworld : five limited editions reflecting the five decades corresponding to this 50th anniversary. The first has just been unveiled at the Monaco F1 Grand Prix, of which TAG Heuer is a partner. Other events will mark the launches of the other limited series in the coming months. Their designs are inspired by the highlights of the Monaco line from 1969 to the present day. Fans of the collection will find details from each decade, with emblematic colors and hour-marker types reflecting its evolution. For example, Monaco has had two types of dials, with horizontal and beveled hourmarkers. In my view, models with horizontal hour-markers have a stronger presence, but those with beveled hour-markers feature something interesting, in that the dial displays a circle within a square. The watch thus looks a little smaller, which appeals to me. The 10 o’clock cross-shaped counters or the 3 o’clock counters that first appeared in 1972 also stand out. Enthusiasts will have to be quick and attentive to order to snap up one of these.

TAG Heuer’s other major theme for 2019 relates to the redeployment of Autavia : can one rightly speak of a symbiosis between design and technology ?

Absolutely, since it is the first collection transversally equipped with our Isograph technology, the carbon composite hairspring patented by our TAG Heuer Institute and presented in January in the Carrera Calibre Heuer 02T Tourbillon Nanograph. But to tell the story of the Autavia’s design, we have to go back to 1911, when Heuer began to produce on-board chronographs, already patented, first for cars and then for planes. Owning a racing car at that time implied a certain income, and their dangerousness called for a singular strength of character, especially when equipped with a dashboard chronograph. Moreover, a Zeppelin owner also acquired one for his crossing of the United States, as did certain aircraft pilots. In 1933, Heuer then produced a model designed for both the automotive and aviation industries – hence the contraction Autavia which is in fact one of the oldest names in watchmaking. These chronographs with their large numerals were pretty cool. In their wake, Jack Heuer designed this first watch for TAG Heuer in 1962, an extremely legible chronograph with the first rotating bezel in Autavia’s history. It marked a turning point for the brand in its shift from pocket chronographs and chronometry instruments to wristwatches. The brand’s spirit has been reinforced in terms of its legibility, rotating bezel and overall sportiness.

How is the contemporary Autavia set to win customers ?

Bringing Autavia into TAG Heuer and making it a collection in its own right gives it new meaning, more depth, while paying tribute to Jack Heuer’s first models. Today we find the dashboard aspect and the rotating bezel from 1962 ; the case size he designed in 1967; as well as the dashboard-inspired multi-level crown on the automatic model and pushers on the subsequently released chronographs. While rediscovering this heritage, today’s customers also benefit from Isograph technology and a COSC-certified movement, all housed in a water-resistant case to 100 meters and equipped with a ceramic bezel. The contemporary models are sold with two interchangeable wristbands : a steel bracelet for week day wear and a ‘weekend’ NATO strap for example. The dial hourmarkers are Luminova blocks that add a lot of character during the day and brilliance at night. Finally, it is also the first time that TAG Heuer has introduced a bronze version.

Motor racing remains an important source of inspiration when it comes to design ?

Naturally. Recalling Heuer’s automotive and aviation past gives a better understanding of the simplicity characterizing the dials. As the Autavia proves, TAG Heuer creates sports watches that can be read in the blink of an eye. They “speak” to race drivers and use the aesthetic codes typical of dashboards, whose information must be read quickly and at high speed.