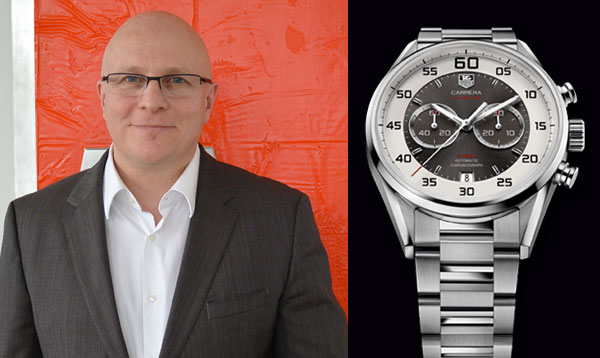 When did you find out that LVMH was going to place you at the controls of TAG Heuer ?
In early May. Discussions had begun at the end of January and everything speeded up after Baselworld. After the selection process, the choice was approved by Bernard Arnault.

What will your priorities be for the next three years ?
Communication, products and distribution. Within a highly competitive image-based environment where all brands portray themselves through ambassadors, TAG Heuer needs a new advertising campaign in order to deliver a clearer and more accurate message. We need more impact and differentiation in order to express our values, and then interpret them through all elements of the communication mix. As far as products are concerned, we have done a lot of innovation and the ranges are extremely broad. What TAG Heuer has accomplished in the Fine Watchmaking segment in such a small space of time is truly exceptional, as was confirmed by the “Aiguille d’Or” awarded in the 2012 Geneva Watchmaking Grand Prix. However, we need to bridge the gap between the peak of the pyramid and more commercially-oriented collections, particularly in the 5,000 to 8,000 euro segment, which I intend to reinforce. Upwards of a certain price level, it becomes easier to provide more horological content. This determination will also benefit from the remarkable expansion of our movement production capacity. Ten years ago, our industrial department had a 200-strong staff, and this number will reach 1,000 by the end of 2013. This manufacturing vertical integration process will also need to be leveraged to create a non-chronograph watch movement which is the key to the Chinese market. Finally, the third priority relates to distribution, a field that we need to improve – on the one hand by raising the quality of the way our products are presented at the 4,300 retailers, a figure that will doubtless be reduced by 10% ; and on the other by enhancing the customer experience in our 180 TAG Heuer boutiques by the end of 2013, a number that should see a 20% rise. This is a recent field of activity for our brand and one in which we must professionalise the teams, increase the productivity of the boutiques and better show customers the incredible depth and range of the TAG Heuer brand.

What are the most important things learned from the three past years with the brand’s American subsidiary ?
Lessons from the field. After 17 years at the company headquarters successively handling technical development, product strategy, marketing and boutique development, my role as Vice-President of Sales, USA & Canada enabled me to move from strategy to implementation. This has involved grasping more concrete ideas and field-based situations; understanding the vital importance of good communication between the headquarters and subsidiaries; as well learning to successfully handle relationships with small retailers and large retail chains. In these situations, we are more pragmatic in respect to the market, we deal with business on a more short-term basis, and we are confronted with the fierceness of the competition in points of sale.

How has the environment changed during that time for the watch industry in particular, and for TAG Heuer in particular ?
Distribution has undergone drastic changes. Firstly by shrinking in that brands are increasingly focusing on certain points of sale in which each linear metre of display space is the object of fierce negotiations; and also by opting for monobrand boutiques. In parallel, just as TAG Heuer is doing in the United States, brands are beginning to sell their watches on their official websites. Finally, the reduction in movement deliveries announced by the Swatch Group is leading to a race for industrial vertical integration, which I see as a tremendous opportunity to accentuate our innovations in the field of movements produced in large series, while also reinforcing the Swiss Made label.

What have you gained from the time you spent on product development ?
The essentials. It represents the core business because it enables us to understand consumers and to grasp their expectations. Being capable of defining which product will appeal to which type of client and on which market is crucial.  By working on these aspects for all those years, I have built up a vast array of knowledge relating to the design of watches – whether our own or those produced by the competition. Analysing failures and successes by geographical zones yields a key strategic advantage in that it enables us to avoid launch errors that can prove expensive. It takes a year and a half to develop a model, another six months to deliver it worldwide, and then a year to evaluate how it is received by the public. So it’s definitely better to avoid getting it wrong!

Of which achievements are you most proud at both ends of the pyramid ?
In the high-end segment, I am extremely proud of the Monaco V4, since it symbolically spelt the start of Fine Watchmaking innovation for TAG Heuer. At the time, we had to create everything from scratch, since we did not have the current development resources now available to us. The concept was born in 2002, we presented the product in 2004, and it took four years to make it reliable with the help of teams we put in place, particularly with the support of talents from outside the watch industry such as Guy Semon, who is at the head of the 40-strong R&D department. This accomplishment kick-started our move to accomplish other major Haute Horlogerie feats, including the amazing Mikrogrider, the first balance-free watch capable of measuring five-thousandths of a second. In the medium range, I saw enormous potential in the Carrera back in 2004, when it was only generating 3% of our turnover. We redesigned it with a more commercial approach that transformed it into a bestseller that currently accounts for 40% of sales.

What is the significance of your recent involvement with electric car racing ?
Since the 1950s, TAG Heuer’s involvement in motor sports has made it the watch brand with the greatest credibility in this field, not only in terms of sponsoring but also of products developed for this purpose. Even though there is an element of risk in this new commitment, since Formula E is only just starting, we want to remain in the avant-garde. Moreover, creating an eco-friendly Formula 1 competition is a noble cause and it is our responsibility to foster such initiatives.

Do you think the Oracle catamaran you are sponsoring will win the America’s Cup ?
Nothing is ever a foregone conclusion in sport, but Oracle won the America’s Cup World Series last year and now fully masters its AC72, as well as being well acquainted with the waters off San Francisco. TAG Heuer is also sponsoring Team Tilt from Switzerland that has qualified for the Youth America’s Cup and is one of the favourites. The late summer sports action is guaranteed to be intense !