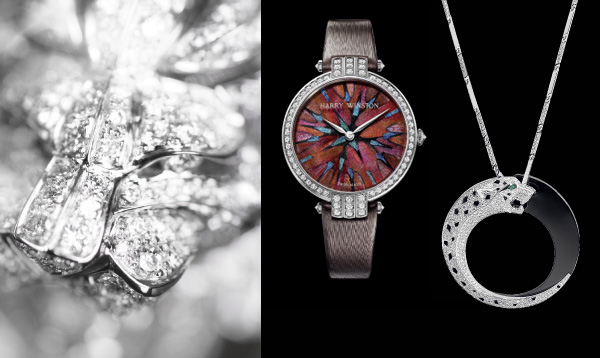 Is it because Gabrielle Chanel was born a Leo that the Maison bearing her name has raised this majestic great cat, the powerful king of the zodiac, to the very pinnacle of the jewellery-making art ? Or might it perhaps be because Mademoiselle Chanel had chosen Venice, the city where the lion reigns supreme, as one of her favourite cities ? Since making its first appearance in Chanel creations in 2012, the noble beast is now taking the lion’s share through an incredible collection of 58 High Jewellery models. All those under its spell will naturally let out a roar of delight.

A panther by Cartier. What else ? The animal is so closely bound up with the House that one sometimes forgets to wonder how such an attachment first began. The story goes that the emergence of this entrancing feline in the Cartier collection may well have something to do with a certain Jeanne Toussaint. Appointed director of the High Jewellery division in 1933, her rigorous approach to her task earned her the nickname “panther”. The moniker has become a famous brand emblem that still appears in watch and jewellery creations representing an open invitation to get caught up in their claws.

Harry Winston and the watch that spreads its tail feathers

Like the peacock to which one of the four Premier Feathers models pays tribute, Harry Winston ‘makes eyes’ at us by spreading its tail feathers in an elaborate courting ritual. This dial featuring a splendid feather mosaic is a contemporary expression of an art highly prized in 16th century Europe and a skill mastered by a rare number of artisans today. Nelly Saunier is the plumassière or feather artist who has devoted her dexterity and her sense of beauty to crafting these extraordinary head-turning models. The result is a bird one falls for in the blink of an eye.

The venerable House founded in 1906 quickly instated the butterfly as a recurrent theme of its creations. From the 1920s onwards, the graceful insect fluttered its wings across precious earrings and earclips. Since them, it has punctuated company history, lending a light, poetic touch to its jewellery and watch collections while playing on the shimmering effects of mother-of-pearl and precious stone marquetry motifs. The Lady Arpels “Papillon Noir Argent” model provides a particularly exquisite example.

It took 30 years for the famous snake-shaped watch to achieve icon status. The line called Tubogas at the time made its first appearance in boutique windows on the Place Vendôme in 1932, but it was not until Elizabeth Taylor wore a yellow gold version set with diamonds and emeralds when promoting the legendary film Cleopatra that Hollywood went wild about it. Ever since, Serpenti has repeatedly coiled its way around the wrists of women in love with this jewellery-watch and its venomous charm.