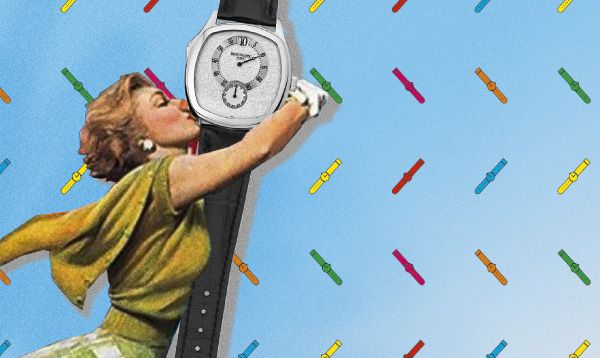 Everyone has lucky days. Really lucky ! The kind of luck that allows us to catch the bus at the very last minute in driving rain or even better that stops a pair of tights from laddering when caught on a chair. That kind of luck happens! For anyone in any doubt, I have irrefutable evidence. Just as I was getting annoyed with my boyfriend’s invasive watch collection, a friend said to me with a sigh : “you’re so lucky – mine collects cars ! And old cars at that, which means that they can’t go faster than 40km an hour downhill – assuming they even work in the first place”. And right there and then, although I am well aware that one shouldn’t take pleasure in other people’s misfortunes, my personal world seemed a little brighter. Because a car collection means a garage needs to be built next to the house, which therefore no longer looks like a chic, contemporary villa ; or else implies a need to find parking spaces in a block of apartments, which is basically mission impossible.

All of a sudden, the watches belonging to the man in my life seemed so small and inoffensive. I could almost have given them a hug. Well, I did say almost, so let’s not get too carried away! But it no longer seemed to matter that they have insidiously colonized my space inside the chest of drawers, nor that we have installed a hideous safe in the dressing room after some stormy discussions… Because the watch-loving man would have preferred to have his collection in the bedroom, as close to him as possible – to the point where I felt my place on the pillow was threatened ! Never mind the pile of empty, useless boxes in which the man stubbornly refuses to put away his watches due to extreme laziness. And also never mind the deadly boring monologue which accompanies every burst of renewed enthusiasm for a watch he had neglected. My whole being was pervaded with a Zen-like sense of serenity. Because, yes, I am lucky, I might have had to share my life with cars and even had to have one in my living room, because there are always potential risks when it comes to a collector’s ideas on interior design. I might have found myself confronted by a partner transformed into a Sunday DIY specialist, covered in grease and bursting with pride in his mechanical feats. Or have had to accompany him to the races every Sunday and then get excited about his pseudo-exploits, or even spend the night in the emergency department because he mistook himself for Hamilton !

I am so lucky that I am even going to treat my man to a new watch !