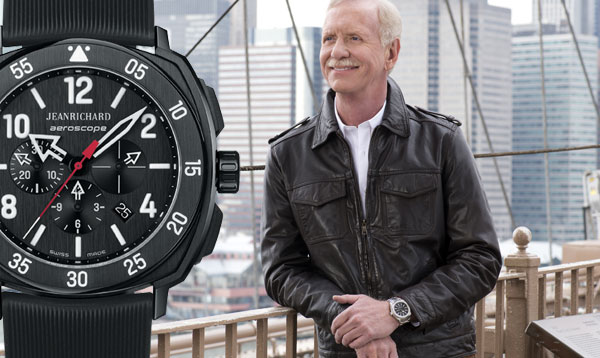 2013, the year JeanRichard takes flight ? That is in fact not far from the truth. The winds of change have indeed been blowing through the brand, which revealed the directions it is taking at Baselworld. After launching two of its key collections at the beginning of the year – Terrascope and 1861 – JeanRichard launched two others in Basle – the Aquascope dedicated to the marine world and the Aeroscope which is inspired by the conquest of the skies. And to present the latter, JeanRichard has found itself a very special patron. A true hero of modern times, Captain Chesley “Sully” Sullenberger made history in 2009 after saving the lives of 155 people by landing his Airbus 320 on the Hudson River in New York. His presence alongside JeanRichard at Baselworld emphasised the company’s values: determination, daring and courage that enable each and every one of us to accomplish great things.
<
>