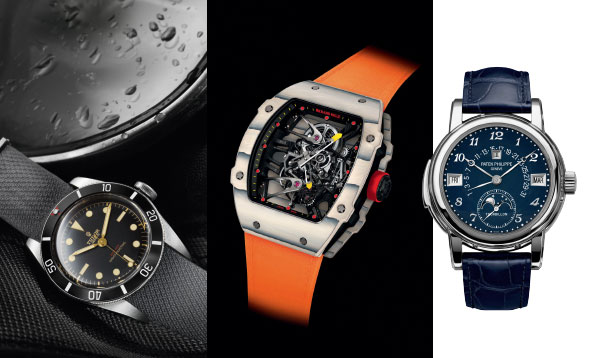 Luc Pettavino (founder of Only Watch) and Aurel Bacs (auctioneer of Phillips in association with Bacs & Rosso) made a successful bid in deciding to move the biannual charity auction from the Monaco Yacht Show in September to Geneva in November. The sale on behalf of the Monaco Association against Muscular Dystrophy raised more than 11 million francs, more than double the proceeds of the 2013 edition, which already broke all previous records since the launch of Only Watch in 2005. Spearheading the 44 one-of-a-kind models created for Only Watch, the Patek Philippe Grand Complication watch set a new individual record at CHF 7.3 million. The second spot was grabbed by the Richard Mille Nadal watch prototype that went under the hammer at the upper end of its estimate for CHF 650,000. Two models highlighted in GMT’s October issue also sprung a surprise: the Tourbillon Souverain Bleu by F.P. Journe sold for CHF 550,000, while the Tudor Heritage Black Bay One rocketed into orbit at CHF 375’000, more than a hundred times its estimate! Check out worldtempus.com for a comprehensive analysis and presentation of all the models.
<
>