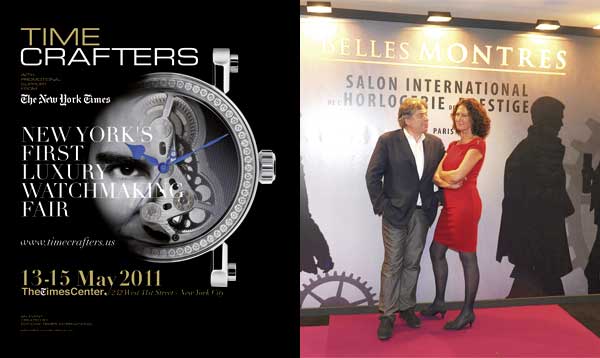 20 exhibitors will congregate in the New York Times headquarters (The TimesCenter) to host New York’s jet set for a VIP cocktail on Thursday evening and a three-day show. Virtually all the SIHH brands will be represented alongside the Fondation de la Haute Horlogerie, as well as Chopard, Harry Winston, Hublot and Zenith. Track this initiative by the Paris-based publishers Temps international (Isabelle Boudrighin, Eric Dumatin) on www.timecrafters.us

All watch event organisers dreamed of uniting with the ultimate reference in its field, the Monaco Yacht Show. The Informa Yacht Group which owns the show has commissioned the Geneva-based Luxeco company (Florence Noël) with simultaneously organising the first Monaco Time Show. Overlooking the mega-yachts (representing an estimated total value of 2 billion euros at the Monaco Yacht Show), the last floor and terrace of the Fairmont Hotel will provide a luxurious 2,000 sq.m. platform for around 20 necessarily prestigious brands. All those with access to the Monaco Yacht Show will be automatically entitled to visit this event. The biennial Only Watch auction (on which we will report in detail in the June issue of GMT) will also take place there this year.

Building on the undeniable success of the four editions of the Paris-based Belles Montres show held at the end of November in the Carrousel du Louvre, Alain Faust is exporting his know-how to a place where it is eagerly awaited – in Asia. The “International Prestige Watch Fair” (to avoid any confusion regarding the nature of the exhibitors) will thus take place at the Shanghai Exhibition Center at the end of October.