Legitimacy for the The Longest Flight

Aspecialist in pilot’s watches for 80 years, IWC has already honored the British Spitfire fighter plane several times in its watch collection. This year, however, it is taking a step forward by becoming a partner in the “Silver Spitfire – The Longest Flight” expedition. Initiated by British aviators Steve Boultbee Brooks and Matt Jones, this will be the first round-the-world flight in a Spitfire. Built in 1943 and with over 50 hours of flight time to its credit, the plane that will be making the The Longest Flight has been stripped down, cleaned, repaired, disarmed, reassembled, and finally, hand polished with the same care a watchmaker applies to a luxury watch. The “Silver Spitfire” will take off next August from Goodwood, in the south of England, for a 43,000 km loop around the world. Around 100 stopovers are planned, spread over more than 30 countries. Steve Boultbee Brooks and Matt Jones will take turns in the cockpit, notably wearing the Pilot’s Watch Timezoner Spitfire Edition “The Longest Flight” specially designed to accompany them on their world tour.

The Spitfire was intended for intense short-range air raids, which means undertaking such a long flight is first and foremost a feat in itself. Beyond that, it also embodies a concern for preservation, a symbol of freedom and peace, and a nod to the history that this journey represents. The organizers’ objective is twofold : to remind the general public of the essential role this engineering gem played for the Allies during World War II and for the return to peace, and to encourage vocations as new mechanics and engineers capable of maintaining and restoring the existing Spitfires so that they continue to delight today’s aviators. 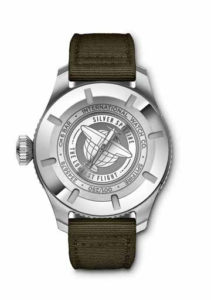 CASE : steel, sapphire crystal resistant to depressurization, water-resistant to 60m, engraving “Silver Spitfire The Longest Flight” on the back