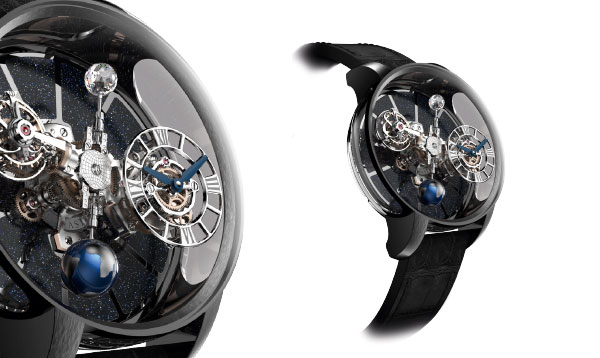 The Astronomia Gravitational Triple Axis Tourbillon Black Gold by Jacob & Co., a wristwatch-sized depiction of the cosmos, is an immediately impressive sight. Pushing technical limits with the three-dimensional Caliber JCAM10, this timepiece performs a fascinating choreography of multi-axis revolutions. First of all, the central axis and the four arms of its modules make a complete rotation in 20 minutes. The tourbillon combines a five-minute turn around the vertical axis with its horizontal 60-second spin. On the opposite site, the hours and minutes subdial revolves on its axis and thus stays pointed in the right direction, thereby guaranteeing a clear display of the time for the wearer of this watch. Pivoting at the ends of their respective arms, the magnesium lacquered Earth appears facing the Moon represented by a spherical diamond featuring 288 facets (patented Jacob Cut) reflecting every ray of light in multiple directions and lighting up the starlit sky during the 60-second rotation around an independent axis. The end result is a stunning visual show that is never the same twice but instead evolves constantly, while appearing to float freely through space above an aventurine background.
<
> 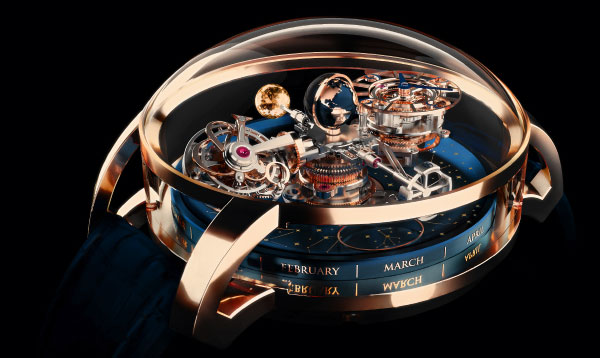 Jacob & Co. : Houston, we have a complication 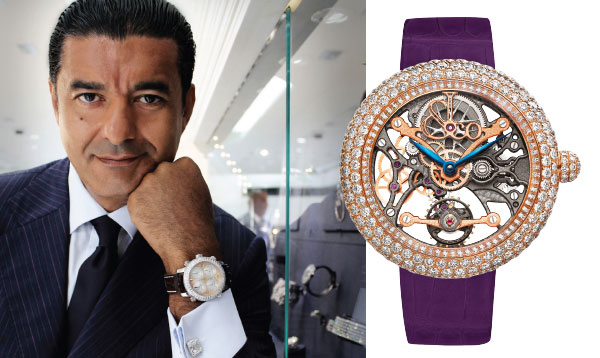