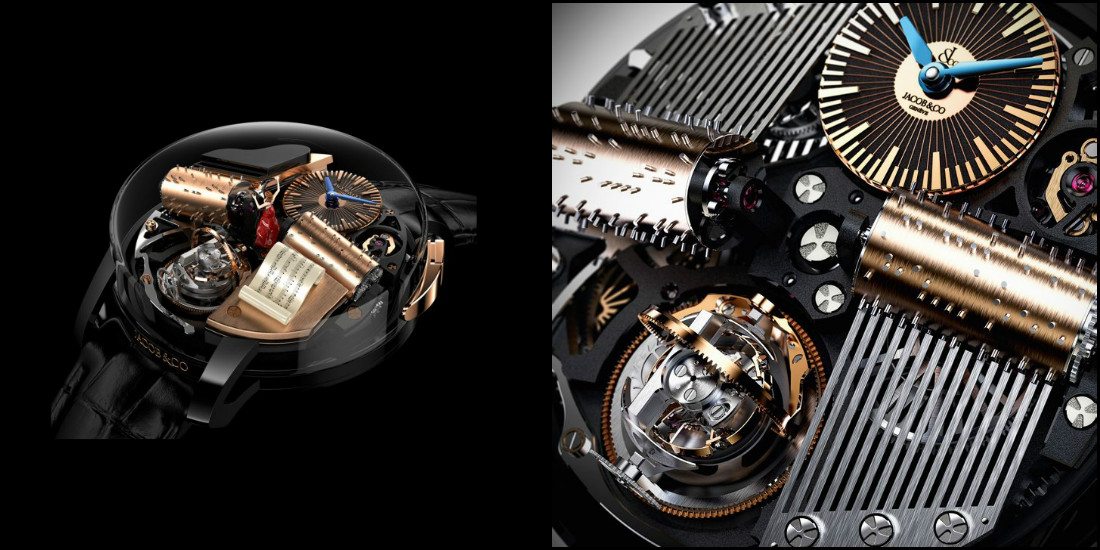 FUNCTIONS : hours and minutes ; on demand, the mechanism plays the “Memory” tune from the musical Cats : gravitational triple axis tourbillon spinning on three axes in 40 seconds, 3 minutes and 8 minutes respectively

After the animated solar system tableau staged amid sidereal silence beneath the dome of the Astronomia models, the Opera Musical Watch by Jacob & Co. makes the most of the case’s thickness to house a music box mechanism alongside the familiar triple axis tourbillon movement and thus provide a sound background. This high-tech watch movement rubbing shoulders with the retro feel of the toothed combs and pin-fitted cylinders typical of traditional music boxes. A press on the 2 o’clock pusher activates the rotation of the cylinders, sounding the “Memory” tune from the musical Cats. But in this aptly named Opera watch, the show is also a visual stage-setting, since the structure bearing the cylinders, as well as the gravitational tripleaxis tourbillon and the hours and minutes dial, simultaneously perform a 120° rotation around the dial. The even more spectacular tourbillon carriage much even faster than on the Astronomia models. The watch comes in a pared-down version highlighting the complexity of its inner workings, as well as another variation decorated with musical scores and musical instruments. Discover the watch in full on worldtempus.com.