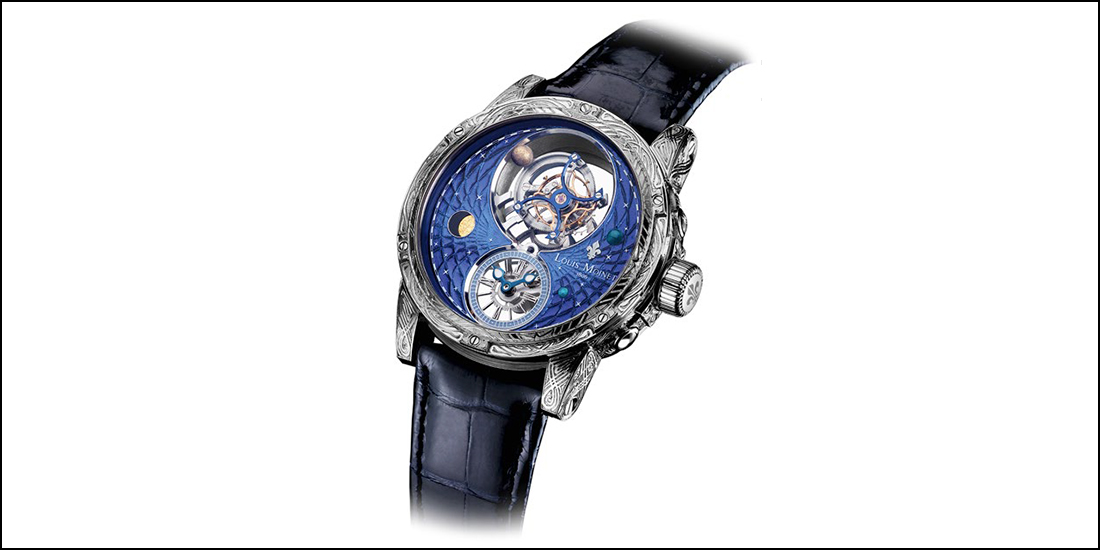 FUNCTIONS : blue, based on a secret composition

Watchmaking is governed by the laws of physics, and particularly that of gravity which the tourbillon is designed to circumvent. Louis Moinet combines these concepts in a limited-edition watch offered in four variations, each issued in a series of eight. The Space Mystery models come with a white or pink gold case, either smooth or richly engraved like the one depicted here. Beneath a patterned blue dial, for which the manufacturing process quite logically remains a mystery, lies a mechanism with a highly symbolic mode of operation. A huge 20mm-diameter tourbillon spins on its axis at 12 o’clock. It is composed of an offset carriage, a double blue arch containing the balance and escapement, as well as a moon serving as a counterweight. Their regular rotation effectively regulates the operation of this 46mm model, on which the hours and minutes are displayed on a 6 o’clock subdial. The rest, the meteorite fragment secured to the dial, along with others ‘stellar’ fragments from Mars and the moon set into the caseband – and indeed the very name of this watch – are obvious references to the vast expanses of space, a recurrent source of inspiration for the ever-fertile imagination of Louis Moinet.