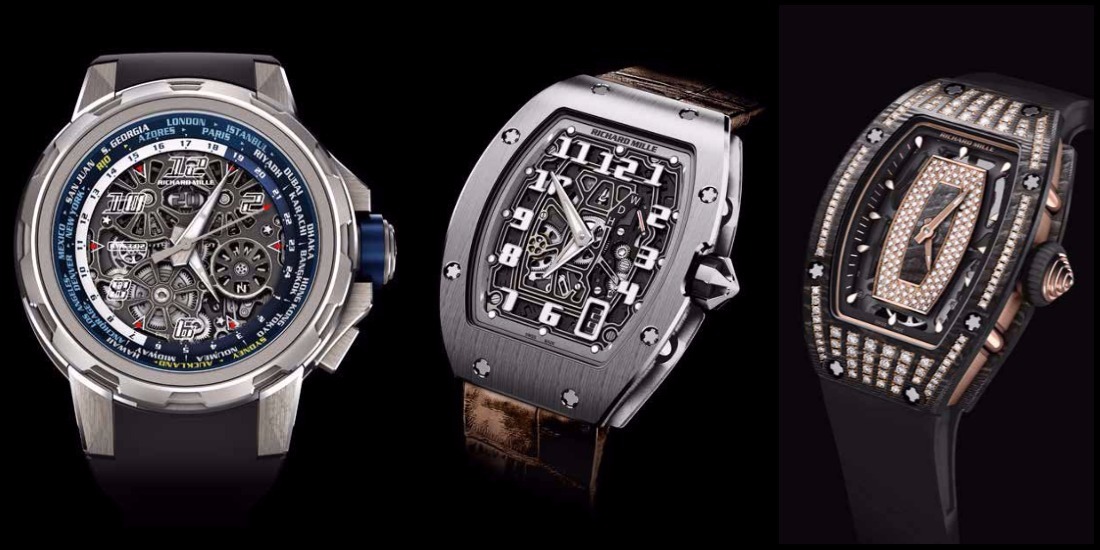 The Richard Mille collection stands out by the rapid-fire creation of several internally developed movements featuring characteristics that are unique, while stemming from the intrinsic Richard Mille brand personality. The RM 67-01 is an extra-thin self-winding watch, which in itself implies a number of specific difficulties and also showcases a Richard Mille signature characteristic : skeleton-working. The latter is highlighted by a new approach to dial construction. To enhance the sense of depth and ensure easy read-off at night, each hour-marker is filled with Luminova, a first for the brand. The vertical date window, placed on the right-hand side of the dial at 5 o’clock, is also broadly outlined with a luminescent coating.

Specifically created for the RM 67-01, the self-winding CRMA6 movement is a new caliber measuring just 3.6mm thick and developed by the Richard Mille engineers in Les Breuleux. The baseplate and bridges are made of grade 5 titanium, while the rotor is in platinum. The movement back features extensive skeleton-working, while a function indicator between 1 and 2 o’clock serves to easily distinguish between winding (W), the date display (D) and hand-setting (H). This is the first time that a tonneau- shaped case is quite so thin. At just 7.75mm thick, this new icon is the slenderest tonneau-type model in the entire Richard Mille collection.

The self-winding RM 63-01 Dizzy Hands movement is an artistic creation featuring the full range of Haute Horlogerie design codes. It is inspired by the first lines of the poem entitled “Time” by Gérard de Nerval, a key figure of 19th century French romanticism. Le Temps ne surprend pas le sage ; Mais du Temps le sage se rit, Car lui seul en connaît l’usage… (Time does not surprise the wise, but of Time the wise laughs, as only he knows how to use it.)

A first glance at the watch reveals no hint of the horological marvels nestling at the heart of the RM 63-01. However, a mere press on the pushbutton in the center of the crown sets off an authentic slow-motion ballet. Protected by a sapphire crystal, the dial begins moving gently in a counter-clockwise direction, while the hours hand advances at a different speed. The vertiginously spellbinding motion of the RM 63-01 Dizzy Hands has the power to release its owner from humdrum monotony, providing constant visual delights with each new detail. When the adventure comes to a close, another press on the pushbutton restores the dial to its initial appearance and its role of simply telling the time, as if it had all been a dream. 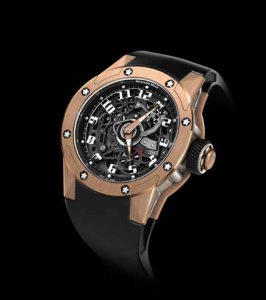 Beneath its apparent simplicity, the creation of this concept watch called for the implementation of original solutions : the heart of the RM 63-01 Dizzy Hands, meaning Caliber CRMA3, is an all-new concept designed, developed and assembled by the Richard Mille engineers. A marvel of technical and aesthetic complexity achieved by revising classic watch design principles and introducing specially devised components in order to entirely separate the hours display from that of the minutes.

The RM 63-02 World Timer by Richard Mille offers a new take on the eponymous complication. It continues the idea behind its forerunner, the RM 58-01, in terms of simplifying adjustment, while incorporating this function in a new in-house self-winding movement. The titanium rotating bezel of the RM 63-02 serves to select the time zone. By placing the name of the city where one finds oneself at 12 o’clock, the bezel automatically defines local time as well as that of the 23 other cities of the world representing its various time zones, by means of the graduated 24-hour flange.

This bidirectional bezel does more than merely serve as an indicator, since it directly interacts with the heart of the movement. The Richard Mille movement constructions opted for in-house Caliber CRMA4 to power the RM 63-02. Made from titanium, it also displays an oversized date at 12 o’clock and features a function selector for winding, time-setting or neutral position at a single press. 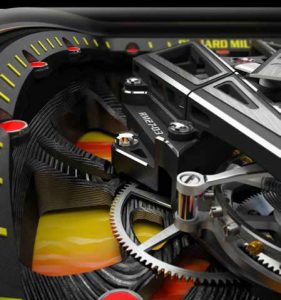 and Rafael Nadal since 2010 is entirely worthy of its illustrious lineage. Its tourbillon movement further pushes the limits of shock resistance, and the RM 27-03 combines innovative materials with respect for watchmaking expertise. The yellow and red colors of its Quartz TPT® case, a tribute to the Spanish flag, have been made by impregnating fine layers of silica with tinted resins using the unique North Thin Ply Technology. The quartz fiber of this case water-resistant to 50 meters boasts a high strength/weight ratio, as well as being non-allergenic and highly resistant to UV rays. 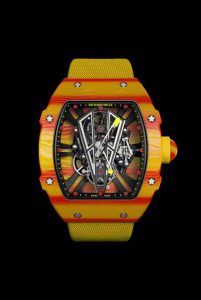 onetheless, the major innovation of this exceptional watch lies in the robustness of its tourbillon caliber, which is able to withstand shocks equivalent to 10,000 Gs. This goal was met after years of R&D, along with simulations of accelerations due to sudden movements and to impacts sustained when on the wrist. Fitting the skeletonized monohull baseplate in Carbon TPT® with a tourbillon caliber serves to guarantee this virtual indestructibility.

The stylization of the tapering, sharp-edged lines of the skeletonized bridges of the RM 27-03 evoke a bull’s head. A symbol of Spain, this motif is also associated with Rafael Nadal. Winding and time-setting are done via a dynamometric crown in Quartz TPT® featuring a tennis ball motif. This particularly dynamic and sporty watch issued in a 50-piece limited edition is Rafa’s new ally in his upcoming matches.

Extreme technology in the feminine mode

Carbon TPT® had hitherto been reserved for the Richard Mille men’s collection. As well as ensuring optimal protection for calibers, it also endows them with a singular and powerful aesthetic. It now appears interpreted in feminine mode with the RM 07-01, featuring an exquisitely elegant diamond-set carbon TPT® exclusive to Richard Mille. At the slightest flick of the wrist, it draws the gaze to its fascinating contrast between the radiance of diamonds and the subtle visual effects of the matt carbon.

Setting gemstones in carbon TPT® is a whole new exercise. Unlike gold, which can be worked directly with tools to create prongs designed to hold the diamonds, the hardness and resistance of carbon TPT® requires dedicated CNC milling machines. Separately produced red gold prongs are then driven so as to secure the diamonds of the RM 07-01 firmly in place. This technique is also used on the RM 037, which features 250 diamonds thus set into carbon. 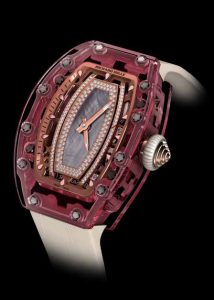 With the RM 07-02 Pink Lady Sapphire, Richard Mille makes its sapphire collection available to women. The latter have in recent years been looking at watchmaking in a new and different way. While gemset watches continue to delight them, they are increasingly drawn to horological complexity and technical sophistication. Keenly attuned to this demanding clientele, Richard Mille is now treating its female customers to this new RM 07-02 Pink Lady Sapphire, featuring a self-winding caliber protected by a pink sapphire case. This exceptional watch feminizes technology by attiring itself in solid blocks of pink sapphire.

The challenge – in terms of both engineering and technology – represented by the production of this case precludes the slightest error when it comes to cutting. This case required almost 40 days of machining and finishing. Beneath its pink cloak beats a unique automatic movement. The new in-house Caliber CRMA5 is assembled around a skeletonized baseplate in diamond-set bead-blasted 5N gold. Like the entire RM collection, the RM 07-02 is equipped with exceptional technical characteristics such as the variable- inertia balance wheel designed to ensure optimal long-term performance, as well as the variable-geometry rotor in diamond-set 5N 18K red gold, adapting the winding according to the user’s movements. The central onyx and diamond dial and the 5N red gold crown set the perfect finishing touch to this exceptional creation.

The Richard Mille Pincesses Rally has played a pioneering role in feminine motorsports. It has for 18 years been countering preconceived ideas regarding women’s place at the wheel.