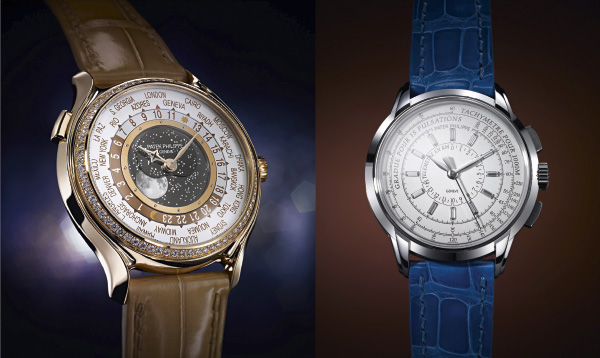 Whenever Patek Philippe celebrates an anniversary, the Geneva brand does so by launching an impressive range of innovations. While the brand’s 175th year was no exception to this rule, it also featured one novel aspect that is far more than a mere detail : Patek Philippe has in fact undertaken an extensive watchmaking approach dedicated to women. Just a short while ago, its ladies’ offering revolved around the mainly quartz-driven Twenty-4® model, which in turn made way for a new generation of mechanical Patek Philippe watches for women named Ladies First and often equipped with complications. The founding act of this new approach was the presentation of the Ladies First Chronograph model in 2009. The first hand-wound chronograph movement manufactured by Patek Philippe was presented in a square gem-set case with rounded corners, radiating an unquestionably feminine appeal. Then came a perpetual calendar, a split-second chronograph and a minute repeater. The finest Patek Philippe complications were thus reworked and redesigned in order to adorn the daintiest feminine wrists. The innovations newly launched during the recent 175th anniversary celebrations of the brand founding are part of this lineage.

The World Time Moon reconciles two fundamental aspects of watchmaking. On a practical note, it indicates what time it is in each of the planet’s 24 time zones. Readable at a glance, it has the benefit of Patek Philippe’s long experience in this regard. This creation that is at once astronomic and poetic displays large-format moon phases in its center on a star-studded background. Reflecting the sparkle of these celestial bodies, the bezel of the 7175 model is entirely set with diamonds. The watch is equipped with a new 240 HU LU automatically wound by a micro-rotor and equipped with a silicon balance-spring. The novelty of this 38 mm-diameter creation is not only mechanical, since it also introduces a subtly modified case design with lugs that have been redesigned to create a more cambered, sensual result. The difference is clearly evident when one compares it with another feminine model launched for Patek Philippe’s 175th anniversary. The 7131 reference is a unique creation that is part of the rare handcrafts collection presented during the self-same 175th anniversary. This world time watch features a central champlevé enamel medallion, while maintaining the same lugs and sides as before. The differences are striking, as the World Time Moon’s curves are softer and its sides more cambered, creating an even more elegant appearance.

In our collective psyche, the chronograph tends to be more of a masculine emblem, generally associated with competitions, cars and motor sports in general. Patek Philippe has already gone against this common perception by introducing a number of feminine interpretations of this complication. The Multi-Scale Chronograph ref. 4675 is the latest proof of this deliberately different attitude. Its dial is completely filled with three logarithmic scales – tachometric, telemetric and pulsometric. Completely ? Not really, because its hour markers are composed of baguette-cut diamonds. The combination of the two makes this watch both a measuring instrument and an object of desire : elegantly diverting a means of measuring the pulse, speed as well as the distance at which a given event takes place. It is enhanced with vividly colorful alligator leather straps in bright blue or fuchsia pink. Claiming that women are complicated is a very masculine point of view. Producing complicated ladies’ watches has well and truly become Patek Philippe’s point of view.