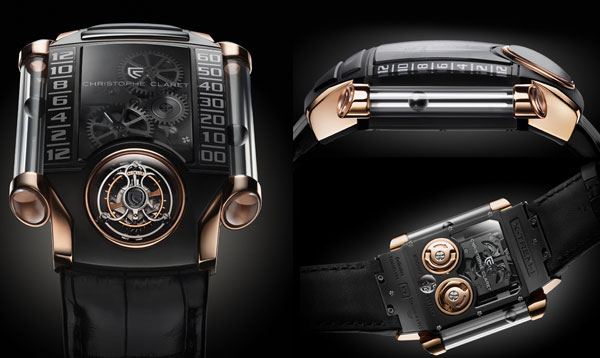 The Manufacture from Le Locle presents the first creation of its new X-TREM collection that will be exceptional in all ways. X-TREM-1 features a tourbillon timepiece and uses magnetic fields to create the first ever timepiece where the hour and minute indicators are not mechanically connected to the mechanism and float through the air. Christophe Claret created a system where two small steel spheres – hollowed to make them lighter – encased within two sapphire tubes placed to the right and left of the caseband, are controlled by precision magnetic fields generated by two miniature magnets moved by cables. The cables are made from an extremely thin and strong woven silk thread more commonly seen in reparative surgery. The resistance of the thread has been tested in the Manufacture Claret on an accelerated-wear simulator corresponding to 60 years of operation.  The spheres float inside the two tubes creating outstanding horological magic.
The entire construction and finishing of this timepiece meets the extreme demands systematically imposed by Christophe Claret. Ultra-light titanium was used for the three-dimensional curvex mainplate and the bridges. A determination to enhance ergonomics and reduce volumes guided the designer in his choices. This is indeed a first for such a complex calibre, especially one made in titanium. The case is composed of titanium and white or red gold, or platinum, and produced in limited series of eight per model. The flying tourbillon is fitted with double ceramic bearings to enhance its shock-resistance. It is inclined at a 30-degree angle in order to make it even more clearly visible to the wearer. The hand-wound watch draws its energy from two barrels – a necessity in this case, since they enable the use of a sophisticated display without disturbing the rate of the tourbillon, and thus the accuracy of the watch. The first barrel is reserved for the tourbillon, the second for the hours and minutes. The timing gear train (first barrel) is regulated by the tourbillon; while the display gear train is regulated by a special escapement which picks up the relevant information from the timing gear train.
The latter is composed of a lever that releases a tooth of the pallet-wheel of the display gear train every 25 seconds, which is driven by a cam connected to the timing gear train. When one of the gear trains reaches the end of the power reserve of its respective barrel, the escapement interrupts the running of its neighbour. This conception offers an important advantage in that the tourbillon and display gear trains are independent, thus avoiding disturbances, optimising power reserve and endowing the watch with excellent precision.
The underlying haute horlogerie criteria governing all activities conducted within the Manufacture also apply to the finishing and the exterior of the timepiece: components are hand-bevelled, flanks are straight-grained, sinks on solid gears are polished and the spokes on open-worked gears are bevelled and polished, screw heads are mirror-polished, and cams, bridges and the tourbillon cage are mirror-polished on the visible side. Christophe Claret devotes particular care to the finishing of each component, which is designed to ensure the overall harmony and aesthetic coherence of the model.

Baccara takes its inspiration from the world of gaming. It is certainly an impressive feat for Baccara to house within its precious case a veritable mini casino comprising baccarat, roulette and dice, all requiring exceptionally complicated micro-mechanics in addition to those providing the traditional time indications of central hours and minutes. It is the sheer complexity of Christophe Claret’s movement that makes it possible to have an authentic game of baccarat, as if the wearer was in a real casino. As the bank and the player have 252 different card combinations available to them, there are exactly 63,504 game possibilities. The baccarat cards appear on the dial as if by magic. At 6 o’clock, the player’s cards are distributed in three small windows edged in either rhodium or red gold, depending on the version. The banker’s cards are at 12 o’clock. To shuffle the cards, the player presses a pusher located at 9 o’clock, which arms a spring, which then simultaneously turns the 6 gold discs on which they are printed. At 8 o’clock, the pusher allows the cards to be distributed to the player. Finally, at 10 o’clock, a third pusher organizes distribution to the bank. Every time the shutter opens, for either the player or the bank, a Cathedral gong is struck and this wonderful striking mechanism can be seen through a lateral window at 2 o’clock. Baccara also gives the wearer the chance to experience the thrills and drama of the craps table : a pair of delicately crafted dice measuring 1.5 mm on each side are housed in a cage at 4 o’clock and visible through a lateral window in the case band and rolled by a simple shake of the wrist. Upon blowing gently on the dial, the wearer will even see the Chinese symbol of luck appearing beneath the sapphire crystal. Turning over Baccara reveals the winding rotor, visible through the anti-reflective sapphire display-back crystal and serving as the roulette wheel on which an arrow indicates the winning number. Finally, Baccara owners will have the option of having their own lucky number engraved on an emerald set in the watch. 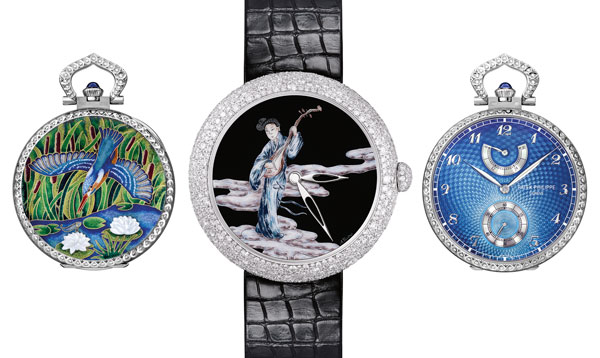 The classic arts meet the watchmakers 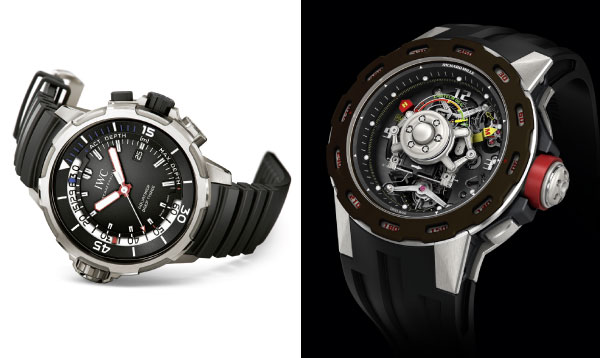