Manufacture Royale : A work of art designed for men… 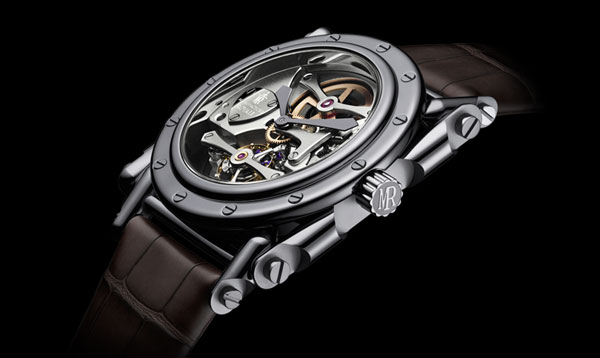 Inspired by the Age of Enlightenment and by Voltaire who created the Manufacture Royale d’Horlogerie in Ferney, this brand discreetly launched two years ago by a watch industry professional offers a range of extremely avant-garde tourbillon watches. After a surprising Opera featuring a “bellows-type” case, the first minute repeater tourbillon model with an over 100-hour power reserve (see next page), Manufacture Royale introduced its Androgyne at Baselworld 2012 in several versions, intended according to the respective finishes for watch lovers of both sexes. The personality of this new 2012 launch is as strong as that of its founder, Arnaud Faivre, an exuberant individual brimming with energy and ideas. The quest for original design brooks no compromise with the standards of the profession, which are scrupulously respected. Fully mastering the much sought-after art of vertically integrated production, the brand seems to have sets its feet on a right royal path indeed.
By taking the name of Manufacture Royale, the company pays tribute to Voltaire who was famous for a brilliant career as a man of letters, but much less so as a successful businessman, trading in luxury items and, in particular, watches. His ability to spot future trends was no doubt acquired during his exile in London. During the two years that he spent there, starting in November 1726, he would meet all the eminent minds of the age including, no doubt, the astronomer and watchmaker, George Graham. He would have felt the first stirrings of the industrial revolution, and clearly he understood the enormous potential that watchmaking could have in the changing world economy. “great minds inevitable meet”, said Voltaire, and Arnaud Faivre knows what that means. The Manufacture Royale has a motto : “E pluribus, unum”, usually translated as “Out of many, one”, which is the very essence of this young company whose roots go back to the time of Voltaire, and where the creativity of its founders combines to offer lovers of beautiful timepieces an object which is simply unique. United in the search for perfection, these artists have pushed the limits of human creativity to deliver a work capable of increasing the fervor of those who love such objects, and even change the very idea of time in all its forms.
Driven by an unquenchable sense of perfection, and an equally consuming passion for the art of watchmaking, Arnaud Faivre has been joined by similar ‘pure’ spirits like watchmakers and designer Charles Grosbéty, prepared to give their all – talent, time and technique – to a project that, in both concept and creation, takes that art to previously unimaginable heights. The idea is not to produce the next rare, exclusive watch, but to create a work of art in the full sense of the term; to produce an instrument whose objective qualities make it stand out from the crowd. A purely intellectual approach to horology where the strength and beauty of the object are the very essence of its nobility, of its pertinence, and of its durability.
Bringing Androgyne was not an attempt to offer just the next rare exclusive watch. The goal was simply to create from scratch a timepiece in which all known concepts are pushed to their limits to launch the ultimate work of art, designed for men as well as for women with an impressive collection including gem-set models and an infinity of variations. Made up of 178 components, its tourbillon movement is endowed with an outstanding 108-hour power reserve. Identifiable at first sight, the very innovative case available in various metals comprises 52 components. To achieve such a contemporary timepiece full of character while at the same time making such a dream come true, state-of-the-art techniques have been married to the most precious human skills, producing the ultimate excellence in watchmaking.

With the Opera timepiece, the creative talents at the Manufacture Royale were given free rein in order to bring to fruition the sum of their ideas and work with a single goal, that of offering to a few discerning individuals the possibility of owning the very best mechanical representation that today’s craftsmen can imagine. Three years of R&D were required to create the first minute repeater tourbillon model with an over 100-hour power reserve, whose ingenious openwork design for the plates and bridges can be observed through the back and front sapphire crystal windows (three mirrors for seven views). For functionality and performance reasons, an escape wheel and lever sculpted in silicon were chosen for the tourbillon cage.
To be sure that the chimes of a repeater watch can be heard without the user having to put the watch to his ear called for a complete rethink of the way the sound waves were to be created and a change in the transmission method through the case. Thanks to his 25 years of experience in creating unique watch-cases, and having carried out several design projects for Maserati, Charles Grosbéty conceived an articulated casing, opening and closing like the bellows of an ancient organ and resembling the Sydney Opera. He focused particularly on the force and regularity of sound by perfecting a very original repeater mechanism comprising three innovations – a more powerful rack spring, a striking mechanism spring longer than that used in traditional watches (6 turns instead of 3), as well as striking gongs made with a single internal part using jealously guarded alloys and processes. Opera now has 5 editions in series production (rose gold, yellow gold, white gold, bicolor gold, and PVD-treated gold). Each 100% Swiss-made collection piece is numbered and designed at the Manufacture Royale’s own workshops in the Swiss Jura. Representing the ultimate in luxury, each numbered Opera piece has a lifetime warranty from Manufacture Royale, and extra, separate movement parts for each piece are filed with the manufacturer’s notary along with assembly instructions. 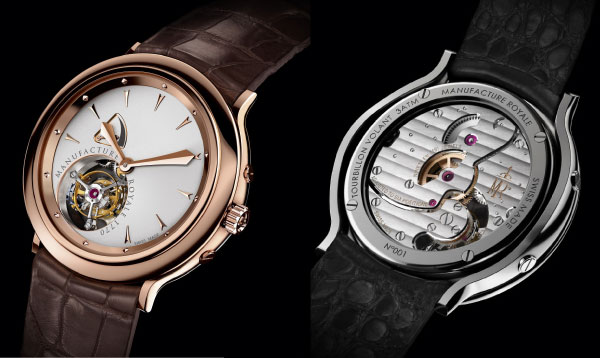 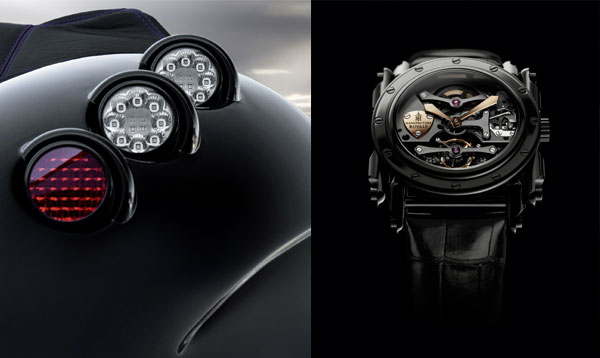