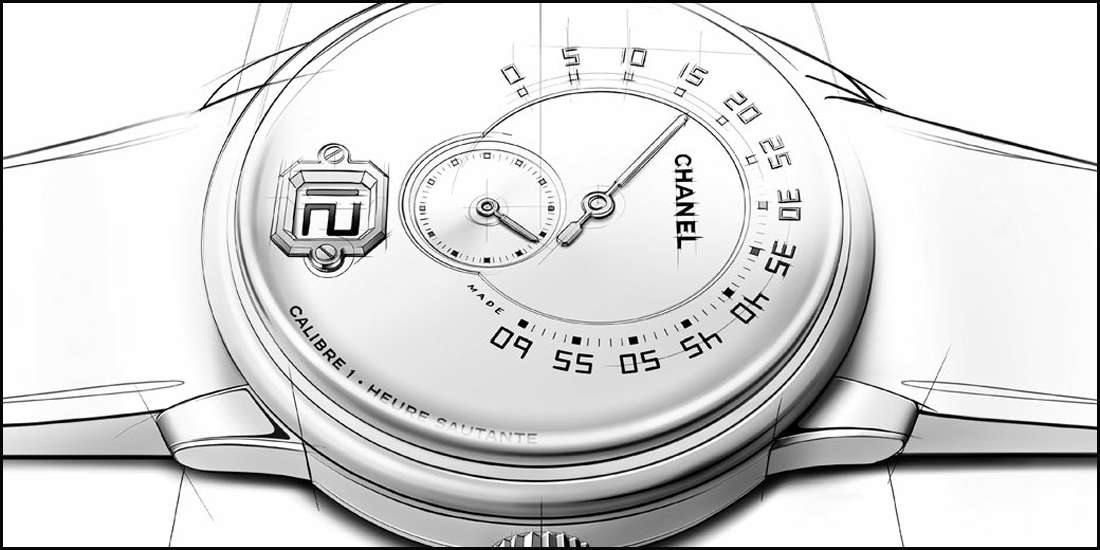 The J12 has been enjoying ongoing success for the past 16 years and the arrival of the Monsieur de Chanel watch may well confirm a profitable and clearsighted strategy, in terms of the current context, the relevance of its positioning, and the respect shown for the Chanel identity. To better grasp the importance of the arrival of this new model, the Maison Chanel entrusted us with one of the first white gold examples of this first timepiece entirely developed and produced by Chanel.

It is obvious at first glance that this Monsieur de Chanel owes nothing to chance The design work involved in creating has doubtless called for considerable energy. Beneath its deceptively classic appearance, the Monsieur de Chanel watch is not short on daring and definitely makes an impression. What proved surprising in the reactions of the lucky few who had a chance to observe the object of this test bench, was that the first response was systematically followed by a flurry of questions expressing a definite interest.

As we have repeatedly stated, successfully creating a “traditional” case is probably the riskiest exercise of all for a designer. That of the Monsieur watch measures 40mm in diameter and its compact lugs are inspired by the 1960s and 1970s. Nonetheless, for a watch that does not seem too small on larger wrists, it features a maximum dial width. The bezel is topped by a surprising and generous beveled flat crystal, creating a bold and retro-futuristic style that we really loved ! The dial with its minutes and seconds hands are “responsible” for the identity of the model and the clear-cut opinions it will generate. Minimalism is the byword, first and foremost in the display mode featuring jumping hours through a 6 o’clock aperture along with retrograde minutes and small seconds. Apart from the splendid square applied jumping-hour window, the finely grained surface of the dial is adorned exclusively with black pad-printed markings. The font used for the numerals and hour-markers is slender, angular and every bit as pure as the profiles of the two hands.

It is easy to see how these style choices will stir debate. Admittedly, if it were not for its splendid aperture, one might even mistake the dial for a working model. And yet one also perceives the visual balance and aptness of an impeccable design.

Some will proclaim it as brilliant and others as scandalous. We have made our own choice and everyone can do likewise.

What a wonderful surprise to see a first 100% Chanel movement and that it should equip this watch ! Chanel has indeed announced that each new model in the collection will be treated to specific functions and above all to its own caliber. So while Chanel is not attempting to vie with the great names in Fine Watchmaking, the Maison is nonetheless fully cognizant with the fundamental rules of the game.

When one first sees this Caliber 1, one is almost surprised by the architecture and the finishes of the movement. Despite the pared-down style, it is in fact less austere than its face (on the dial side). The entire set of components appearing on a magnificently grained baseplate appear to be held by a single circular bridge. The bridges and baseplate are black-coated while the moving parts are rhodium-plated. This color combination can at times be detrimental to highlighting the depth effects, but is magnificently interpreted here. On the technical side, two series-coupled barrels supply the energy required to power a sprung balance oscillating at a rate of 28,800 vibrations per hour for 72 hours.

The finishes are far superior to the standards generally applied in this range and the movement occupies the entire space of the case – something that even certain big names do not systematically achieve. This is clearly what one would expect from the Monsieur de Chanel watch and in this respect it generates universal respect. Its relevance, its architecture and its finishes ensure a perfect score card, so what about its performance ?

Although it indicates only the hours, minutes and seconds, the very fact that this model features jumping hours combined with retrograde minutes was not the easiest choice that Chanel could have made for a first in-house model. While both complications are relatively simple in themselves, they become far more complex when they are combined. The jump of the hours disk and that of the minutes hand must be perfectly synchronized in order to avoid any incorrect display errors. Yet each of the components of the two mechanisms requires a certain degree of clearance – and hence freedom. When placed at the end of the kinetic chain, this clearance for each can lead to significant differences in the exact moment when each function jumps. It is thus no coincidence that only a handful of brands fully masters and offers this combination of complications. Chanel seems to have found the right solution (patents pending), since whether in operation or when time-setting, the two are synchronized to the nearest fraction of a second and time-setting is possible in both directions.

As far as the customary measurements were concerned, Caliber 1 delivered faultless results : the autonomy, the amplitudes and the rates displayed a degree of precision meeting very high standard. We took a particular interest in the energy consumed on each hour when the hours and minutes jump. The constructors of this Caliber 1 have opted for instant jumps which we would describe as very fast and energetic. The acceleration and deceleration undergone by the minutes hand must be dizzyingly powerful. Another choice, involving a compromise, relates to the period when the specially large amount of energy required for the jump is being drawn from the barrel, resulting in a loss of amplitude. This occurs at a late stage (measured at less than five minutes prior to the jump) and is thus relatively significant (up to 35° were measured). We fully approve of this choice, given that the display and the jumps are clear and reliable, and that the two barrels and the power reserve of this caliber jointly ensure that the precision timing remains exemplary throughout the duration of the power reserve.

Since this is a pre-series model, it is highly likely that a number of adjustments will be implemented, thereby further perfecting these results on the 300 movements that will be produced this year.

Despite our enthusiasm, it is hard to predict what the future holds for the Monsieur de Chanel watch and what lasting impact it may have. Whatever the case, as you will by now have grasped, our feeling after this test bench is that all those involved in developing and producing this model have done everything exactly as they should. They have made certain choices that may perhaps not be the most “commercial” or popular, but which were essential in guaranteeing such an accomplishment. A very fine “first” appearance.