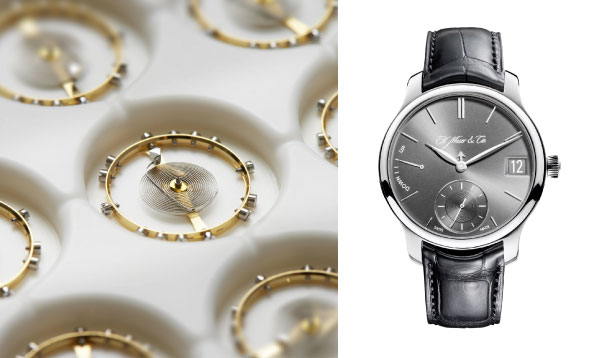 The Patek Philippe 5227 and the A. Lange & Söhne Lange 1 that recently took their turn on our test bench reached the highest peaks of contemporary Fine Watchmaking and naturally made us doubt that we would see any comparable mechanical and aesthetic feats in the near future. That was before we met this Perpetual Calendar by H. Moser & Cie. This watch featuring an almost Germanic sense of technicality and understatement (the Manufacture Moser is located near Schaffhausen) is set to play more than a mere outsider’s role among the exclusive circle of prestigious watch manufacturers. Despite its relatively recent contemporary history, the brand has cleverly laid down strategic markers for the future under the guidance of the brilliant Edouard Meylan who has recently taken the helm.

While one may as previously mentioned note a certain restraint and timeless classicism, the exterior of this Perpetual 1 deserves a detailed examination in order to discover the many advantages serving the cause of comfort, functionality and impeccable aesthetics, rather than the wearer’s need for social recognition. For this test bench, not only were we the first to examine this Perpetual 1, but we were also entrusted with a model featuring a platinum-clad 40.8mm-diameter case. Both the color and the surface finishing of this metal set the design and proportions of the case off to its best advantage. Among the most remarkable details revealing a wealth of subtle yet complex exceution and finishing are the bezel supports and the beadblasted bezel sides at 3 and 9 o’clock, along with the design of the lugs. This type of detail, although anything but ostentatious, contributes to the supreme aesthetic beauty of the case. However, the owner will need to turn the timepiece over or slip it onto his wrist to appreciate another of these details that are the bedrock of Fine Watchmaking: the round glass protecting the caseback is concave along the 12-6 o’clock axis so as to better mold the wrist, yet without creating a “chimney” effect between the glass and the upper part of the movement. The model in our test bench features a splendid anthracite dial with a finely sunburst base. This motif is all the more delightful in that its iridescent visual effect is perfect, whereas the surface of the dial appears to be homogenous in terms of both finish and color. The date is displayed by a disc appearing through a 3 o’clock aperture. Along with the stunning “sage-leaf” hour and minute hands, a short coaxial arrow-shaped hand soberly indicates the month by smartly and simply pointing to one of the 12 hour-markers.

The new in-house caliber (HMC 341) makes an instant impression by its quality of execution, its finishing and a few perceptible innovations. This hand-wound movement with its 15-ligne diameter is driven by a pair of barrels. Oscillating at the noble frequency (an aspect we will touch on later) of 18,000 vibrations per hour, the ratio thus achieved ensures a 7-day power reserve. The idea and the functionality of the perpetual calendar as H. Moser & Cie conceives it are amazingly simple and efficient when it comes to solving the recurrent issues faced by the developers and users of such horological complications. Judiciously placed at the heart of the bridges on the movement side, the leap-year cycle star and its jumper spring directly serve as an indicator. This is simple and smart in that the information is only useful when adjusting the calendar; it does not “get in the way” of reading the dial information. The efficiency of the gear train is exemplary in terms of the dedicated cutting of the teeth and pallets, nobly set in screwed gold chatons. Each organ delivers its own measure of enchantment and innovation. The escapement is rapidly interchangeable by means of two screws. The patented escape-wheel and pallet form are in solid gold, while the balance-wheel is regulated by an in-house double Straumann Hairspring® with a Breguet overcoil – no less !

However, the most impressive feature of this caliber, although invisible, will be greatly appreciated by all those who have at least one perpetual calendar in their collection. The correction of the date and month indicator can be done in both directions, including when the date mechanism is engaged with the mechanism – a feat made possible by the intermediate position of the winding-crown and stem !

The chronometric results of this caliber are on a par with all the pleasant surprises discovered in the lead-up to the tests. Its ultra-traditional 18,000 vph frequency might seem a little low in this age of the race for high frequencies, yet the isochronism achieved by its remarkable regulator guarantees ideal precision and enhances the autonomy beyond the officially declared seven-day mark. Only three measurement cycles were performed at 0 hours, 48 hours and 6 days after winding. For the entire set of measurements, a global 50° difference was observed between the vertical and horizontal positions. This gap might seem relatively large if the chronometry itself were not acceptable. However, with maximum variations of 5 seconds /day at 0 hours and 48 hours (between 0 and 10 seconds/day) and 9 seconds/day after 6 days, the results measured were as stunning as each of the countless details of this movement.

When worn, despite the substantial weight of the case due to the use of platinum, the watch seems to literally melt into the wrist in terms of comfort. One might perhaps regret the slightly long double-blade folding clasp that one is less able to forget than the case and its remarkable ergonomics.

An elegant, timeless, functional and sophisticated model embodying a vast amount of intelligence, this Perpetual Calendar by H. Moser & Cie is probably one of the most striking wristwatches in contemporary horological history.