Blancpain : At sea or in town, for men as well as for women… 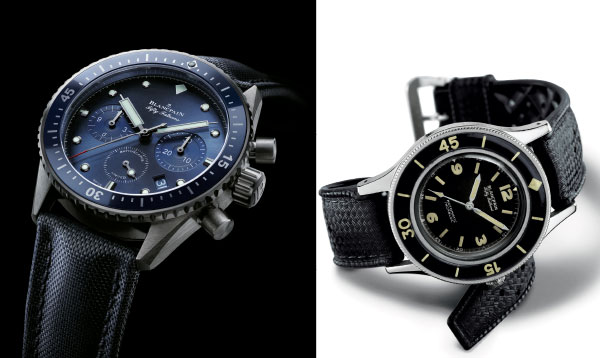 One cannot have basically invented the modern diver’s watch and not give back to the sea. Indeed, when Blancpain came up with the Fifty Fathoms watch in 1953, they set a time-keeper’s standard for the then nascent diving industry. Today, they are a fixture of Blancpain’s offering. Instantly recognizable thanks to their wide, convex sapphire bezel, the modern Fifty Fathoms are generally 45 mm in diameter. Blancpain has recently enriched the family with a slightly smaller, highly technical evolution, the Bathyscaphe. It is a legendary name at Blancpain. Three years after the 1953 debut of the original Fifty Fathoms, Blancpain introduced the Bathyscaphe as a smaller diameter diving watch adapted to daily wear. It evolved in parallel with the Fifty Fathoms and became a part of that story. This patrimony is fully honored with the debut of the Ocean Commitment Bathyscaphe Chronographe Flyback, as it is a fully featured underwater chronograph, which at 43 mm in diameter is smaller than the core models of the Fifty Fathoms collection.

The Ocean Commitment Bathyscaphe Chronographe is a special, 250-strong, limited edition meant for supporting and honoring Blancpain’s projects dedicated to preserving the sea. Chief among them are the National Geographic Pristine Seas Expeditions and Project Gombessa. Each purchaser will join the Ocean Commitment Circle and will contribute to reinforcing Blancpain’s support for oceanic environmental causes through an additional donation which will be made for each watch. Blancpain commits to donate 1,000 Euros of the revenues from the sales of this piece to various initiatives, which is Blancpain’s way to give thanks and to give back to the great salt waters.

The Ocean Commitment Bathyscaphe Chronographe features Blancpain’s latest in-house movement, the F385. This entirely new column-wheel-controlled flyback chronograph movement runs at the high frequency of 5 Hz, or 36,000 vph, ideal for a chronograph as each second is perfectly divided into 1/10ths of a second. The F385 is further distinguished by its silicon hairspring. Because silicon is a-magnetic, it provides the same degree of protection from magnetism as soft-iron inner cases. However, whereas soft iron inner hide the movement, the F385’s use of silicon allows protection from both magnetism and transparency.

Two other features of this new timepiece bring important functionality to the world of diving. Unlike most diving chronographs, which paradoxically forbid chronograph use underwater and require that the chronograph pushers be “locked down” during immersion, the Bathyscaphe Chronographe Flyback sports sealed chronograph pushers allowing use of the chronograph during dives to a depth of 300 meters. Secondly, the chronograph  incorporates a flyback function. Whereas standard chronographs require three actuations of the pushers to time back-to-back events (one push to stop the first event, a second to return to zero and a third to start the second event), the flyback function greatly simplifies operations. A single push of the return-to-zero pusher stops the clock, returns the timers to zero and restarts the timing for the second event. This is useful during decompression. This higher level of practicality is the result of sixty years of experience in diver’s watches.

Blancpain is not only about movement performance. It is a fully accomplished Manufacture well versed in the arts which make watches unique and rare. Renowned for its engraving and enamel painting workshops as well as its Damascene timepieces, Blancpain introduces Shakudō. Japanese in origin, Shakudō is an alloy principally composed of copper and gold, which acquires a blueish black patina. Rarely seen in the world of watchmaking, Blancpain has brought this art form forward with a series of unique pieces which reflect the expertise of the Manufacture in the exercise of artistic crafts. No less than five different models are being presented which combine Shakudō, engraving and Damascening. Each timepiece is exclusive as it reflects the individual trade-craft of the artisans and their style of engraving. The different resulting nuances in depth render each work truly unique.

The first watch to stem from that range is easily recognizable. The image of Ganesha with his elephant’s head is portrayed on the dial. For Hindus, he is the God who conquers obstacles. He is also the God of wisdom, intelligence, prudence as well as the leader of schools and academics. This is illustrated with a hand-engraved gold throne placed in the center of finely detailed Hindu motifs crafted in Damascene. This technique consists of fashioning troughs upon the dial surface into which fine threads of gold are hammered in place, before being hand-engraved. The second Métiers d’Art Shakudō to emerge represents the mythical Griffon on a background of Mesopotamian temple bricks. Fully respecting the aesthetics of the Villeret collection, these models are housed in a red gold case of 45mm, a diameter that gives free reign to the creativity of Blancpain’s craftsmen. Through the sapphire case back, one can gaze upon the hand-wound caliber 15B decorated with hand-applied Côtes de Genève.

Mastering mechanics and aesthetics is Blancpain’s identity and it is never as obvious as when it is dedicated to women’s watches. Equipped with an exclusive movement incorporating two retrograde indications, Blancpain’s Jour Nuit distinguishes itself with technical innovations and by fine craftsmanship. Based upon caliber 1150, the movement of the Jour Nuit is a large one. Its winding rotor is engraved and skeletonized in order to enhance the view through the sapphire case back. With a diameter of 40 mm, this timepiece offers an harmonious balance between diameter and thickness, which is less than 12 mm. The bezel is set with two spiral-shaped rows made of 140 diamonds. The dial is fashioned entirely in mother-of-pearl and is divided into four levels.

The Day Night disk revolves twice a day. Each rotation allows the discovery of the details of the day and night theme. Many different techniques were used in its creation. Gradations in the color blue, achieved by deposits upon mother-of-pearl, mark the change from day to night. The moon is made of 50 diamonds, the sun is fashioned with 50 yellow sapphires and 14 diamonds represent the stars. Most striking is the way the two retrograde indications are combined with the minute hand. The minutes are displayed with a regular central hand while the seconds hand is retrograding : it jumps instantly to its point of departure to begin its progression anew. Similarly, the hours’ hand retrogrades twice per day, again in sync with the minute hand. Blancpain’s complications go hand in hand with finely crafted dials, always, be it for men or women. 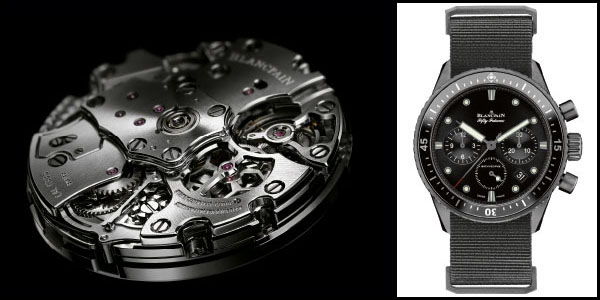 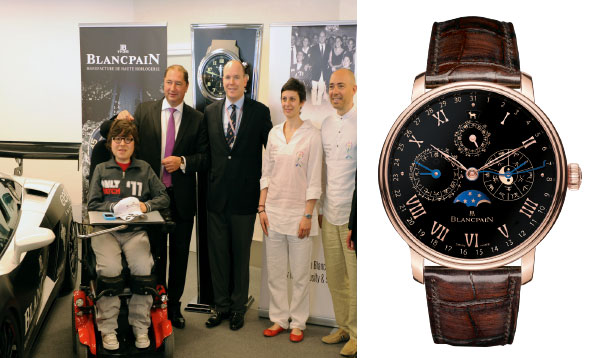 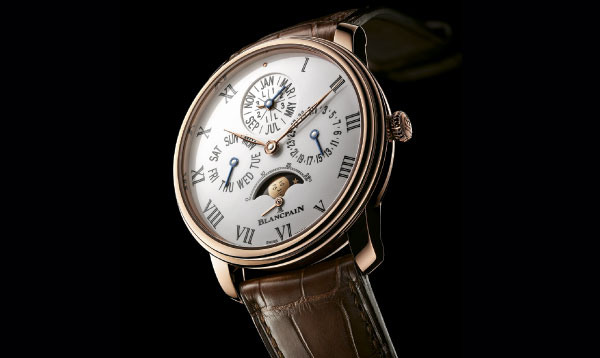