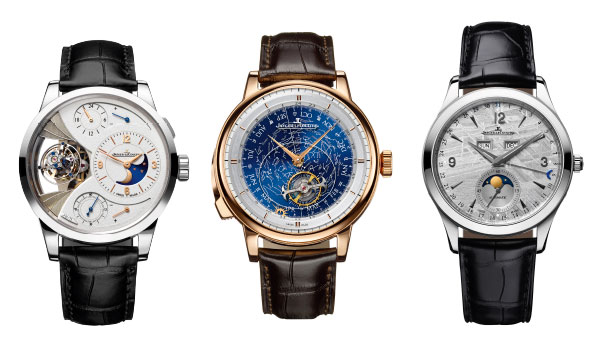 The world is a vast and marvelous mystery of which Jaeger-LeCoultre captures the quintessence in placing it on the wrists of traditional watchmaking enthusiasts. These timepieces are authentic objects of fascination featuring a blend of mechanical complexity, aesthetic perfection and an invitation to dream of infinite horizons.

From Earth to Moon, the Duomètre Sphérotourbillon Moon strikes a perfect balance between visual harmony and timekeeping precision. Equipped with a remarkably reliable moon-phase display, this watch embodies the age-old wisdom of traditional astronomy with Jaeger-LeCoultre’s formidable inventive abilities. Its moon phase is indeed designed to remain accurate for 3,887 years. It thereby showcases an exceptional mastery of the mechanics of time – and of the universe – that is all the more astonishing when one recalls that a traditional moon phase accumulates a one-day difference every two and a half years. The magic of the Sphérotourbillon also lies in its ability to evaluate the Earth’s correct axis. In addition to performing one full turn around the axis of its titanium carriage, the Sphérotourbillon also turns around a second axis inclined at a 20° angle. Resolutely precise on all fronts, the watch provides a flyback function that avoids halting the continuous operation of the regulating organ. The balance never stops as the small seconds is reset to zero and begins running again instantly.

The captivating nature of the Duomètre stems from the fact that technical performance never outweighs aesthetics. One of the strengths of its design, reworked to ensure even greater legibility, lies in the symmetry of the functions displayed on the finely grained dial. In tribute to astronomy, the moon disk is made in lapis lazuli, a rock that looks as if has dropped directly from the sky. It bears a powdered sprinkling of stars echoing the Moon, the hands and the hour-markers. The dramatic ‘stairway’ in satin-finished non-treated nickel silver creates a splendid stage-setting for the rotation of the Sphérotourbillon.

Paying eloquent tribute to traditional late 19th century watchmaking, the Master Grande Tradition Grande Complication brings the entire complexity of the universe to the wrist. Inspired by the design of the pocket watches from that stellar phase of horological history, this timepiece is entirely dedicated to astronomical time measurement. The counter-clockwise rotation of the tourbillon in 23 hours, 56 minutes and 4 seconds is a fascinating sight, as it moves around the dial to which it is secured like a capsule suspended in the stratosphere. The phenomenon of weightlessness is further accentuated by the minimalist carriage made of ultra-light titanium. So as to highlight the astronomical side of time measurement, the tourbillon does not indicate the passing of standard or “civil” time, but instead that of sidereal time. The point of reference is not the sun, but rather other more distant fixed stars. The dial also provides a spectacular and functional calendar display. Around the circumference of a majestic sky map of the Northern Hemisphere, a Sun makes one turn about the dial in exactly 24 hours. It indicates the zodiac signs, with the months and days appearing on a circular scale around the rim. Thanks to this small Sun providing a 24-hour indication of civil time, it is immediately obvious whether the time is 10 am or 10 pm. Finally, this model is endowed with an additional characteristic in the shape of a mechanism chiming the hours, quarters and minutes on demand with an exceptionally high-quality acoustic effect. A magnificent accomplishment !

The new Master Calendar also showcases the fascinating appeal of astronomy through the material used for the dial, made from a strange and intriguing meteorite stone that overturns the traditionally pared-down aesthetic of the Master Calendar. Composed of a single block of meteorite discovered and registered in Sweden, it comes from the asteroid belt between Mars and Jupiter. The emblematic complete calendar of this model displays the date by means of a long hand tipped with a moon crescent and sweeping over a scale running from 1 to 31 around the rim of the dial. It also shows the day of the week as well as the month, respectively appearing in twin apertures at 12 o’clock. Finally, the complete calendar indicates the various phases of the Moon – new moon, first quarter, full moon and last quarter – in a traditional depiction of the heavenly body rising up between two clouds to shine in a star-studded sky.

The enchanting magic weaves its spell while testifying to the expertise of the Manufacture in the Vallée de Joux. The message is crystal-clear: astronomy is marvelously suited to women.

Jaeger-LeCoultre naturally wished to share its fascination for the skies with women who are drawn to the beauty of our universe. Especially for them, Jaeger-LeCoultre has designed and developed two models for its iconic Rendez-Vous feminine line. The Rendez-Vous Moon provides a new aesthetic form of expression for the moon phase. The latter plays a genuine starring role and asserts an impressive presence on this model. This generously sized and fully expressed display reveals the creative freedom driving the Grande Maison. Jaeger-LeCoultre has decided to endow this complication with precision guaranteed for 972 years – an eternity in human terms! Mother-of-pearl was a natural choice of material for the moon disk, while diamonds also participate in this celebration of technical sophistication and elegance. The Rendez-Vous Moon 36mm version sparkles with the fire of 166 brilliant-cut diamonds, while the captivating Rendez-Vous Moon 39mm interpretation is rimmed with 208 brilliant-cut diamonds.

The fascinating and flamboyant Rendez-Vous Celestial also exalts the beauty of the skies. The dial is adorned with purple red aventurine, whose deep shades sprinkled with sparkling flecks create a sensual wave. The pink gold case exudes a warm and radiant glow. Like a luminous echo of the precious metal, diamonds adorn the side of the case and form a precious halo above the numerals. On the precious dial, a superb depiction of the zodiac depicts the circle of signs at 6 o’clock. The zodiac calendar serves to designate the position of the constellations throughout the year by means of an annual calendar regulating the display and time measurement system. The enchanting magic weaves its spell while testifying to the expertise of the Manufacture in the Vallée de Joux. The message is crystal-clear : astronomy is marvelously suited to women.