Piaget : Instead of fitting the hands above the bridges… 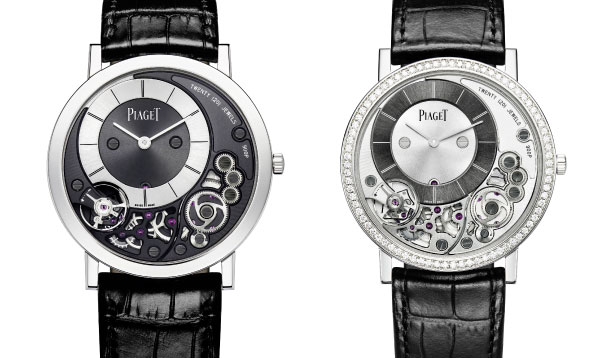 2014 is a vintage year for Piaget, which celebrates its 140th anniversary and marks the occasion by launching a model that is set to defy the conventions of ultra-thin fine watchmaking for many years to come: the Altiplano 38 mm 900P, where caliber and case are designed as a single entity in order to achieve record-breaking slenderness at just 3.65 mm thin.

Already in 1960, Piaget set a first record with its Caliber 12P, the world’s thinnest automatic movement at just 2.3 mm. The following years witnessed a spate of new slimness records in the fields of hand-wound and automatic models, with or without horological complications – like Caliber 600P, the world’s thinnest hand-wound shaped tourbillon movement;  and 1208P, an automatic movement that is also the thinnest in its category, to mention just a couple of these feats. Constantly reaffirming its unconditional love of slim mechanisms, the Manufacture de Haute Horlogerie Piaget has produced 23 ultra-thin calibers out of the 35 movements developed and produced in-house, of which 12 have set new records for thinness over the past few years and are now part of the collection. It is this know-how that nurtures Piaget in constantly pushing the boundaries of its art and perpetually innovating through a string of exceptional creations. The latter are distinguished not only by their extreme slenderness, but also by their uncompromising reliability – a criterion that governs each and every choice made by the Manufacture. Testifying to the impressive success of this double challenge, all of the 23 ultra-thin movements have been produced continually since the time of their launch, while Caliber 430P has established itself as one of the world’s most widely produced ultra-thin hand-wound movements, due to its extreme resistance.

Making an ultra-thin watch is a constant challenge

Right from the first project sketches, all those involved must anticipate the functional, aesthetic and durability constraints involved in paring down parts to the extreme. Very few manufacturers are tempted to adopt such an approach, and even fewer develop and produce in-house both their calibers and their cases under the watchful eye of the in-house designers. Piaget belongs to this exclusive circle. While the Altiplano 38 mm 900P merges the case and movement to establish itself as the thinnest mechanical watch, it also stems from another fusion without which such a feat would have been impossible : that of the two Manufactures Piaget, where the movements are traditionally made, and where the cases are crafted. These skills are now inextricably intermingled, since within the Altiplano 38 mm 900P, the mechanism and the external components form a single indivisible entity. For a full three years, watchmakers, case constructors and designers worked together at each stage of development, production, adjustment and finishing in order to give life to this slender marvel. The true secret of this extreme slenderness lies in the structure of the case itself, of which the back also serves as the mainplate. Thereby merging caliber and case, the latter was machined directly from the case-back in order to house the mechanical parts. This highly complex architecture meant reversing movement construction so as to fit the bridges on the dial side – an approach that also has an aesthetic effect by keeping them visible. Given the extremely confined space available, the glass would be liable to press on the hands when deformed, thus causing the movement to stop. To avoid this challenge to any ultra-thin model, Piaget has come up with a revolutionary device (patent pending) representing a major breakthrough in ensuring the reliability of this type of watch. Instead of fitting the hands above the bridges, Piaget has placed them underneath, thereby freeing up space between the cannon-pinion and the crystal. When the latter is deformed by the effects of pressure, it presses not on the hands – placed below the bridge level – but instead on the wheel-train bridge, thus avoiding any adverse consequences on the rate of the movement.

Even though some of its 145 parts remain hidden from sight, all of them have been meticulously finished in keeping with the noblest horological traditions, through countless hours of patient work rendered even trickier by the extraordinary slenderness of the components. The mainplate carved out of the watch case-back has been satin-brushed and sandblasted, while the wheels are alternately sunburst or circular satin-brushed. Hollowed so as to reveal the subtle mechanical intricacies at the heart of the Altiplano 38 mm 900P, the beveled and sunburst satin-brushed bridges are black-coated to create elegant contrasts with the white gold case. In its pink gold version, the watch bears anthracite mechanical elements, whereas when it appears in the gem-set white gold variation, the bezel lights up the entire creation with its 78 diamonds. Finally, the index-assembly bearing the Piaget “P” strikes a resounding signature note within this subtly orchestrated Fine Watchmaking symphony.

In love with roses

Roses have punctuated Yves Piaget’s life as well as the history of his famous Maison, consistently nurturing its creations. Since the 1960s, this luminous flower has enriched watch and jewellery collections with its diamond-set golden petals. Yves Piaget created the trophy for the Geneva International New Rose Competition in 1979 and presented the winner with a golden rose made by Piaget’s workshops. His passion for these delicate flowers was rewarded in 1982 when the winner of the competition, created by the famous rose breeder Meilland, was christened the “Yves Piaget rose”. In parallel, Piaget has distinguished itself in the field of jewellery watches thanks to its exceptionally daring attitude. Encouraged by the ever-growing success of its creations, the acknowledged couturier of gold and diamonds has consistently proven its ability to offer stylish variations on how its models are worn: its secret watches, cuff watches and sautoir watches have had a lasting impact on the world of feminine watchmaking. In a captivating flurry of 269 grain-set diamonds, the latest creation to blossom in the wonderful garden of Yves Piaget rose bushes unfurls its delicate corallae like a bouquet of diamonds gracing the golden flowerbed beneath. Like a barely open rosebud, four gem-set petals compose pure, gently cambered curves ideally suited to daily wear. And then, as if at dusk to herald an enchanting evening, the flower blooms entirely to reveal four new diamond-paved petals. All the ingenuity of the Piaget artisans was once again put to the test in devising this stunning “live” blooming of a splendid jewellery rose. The upper case of the Limelight Blooming Rose swivels 45° as desired, thanks to an invisible mechanism mysteriously orchestrated by Piaget.

Garden rose, elegant rose, exotic rose, the Piaget Rose Passion collection is bold, contemporary and glamorous. This jewelry collection is based on a luminous choice of colourful and precious stones (yellow diamonds, emeralds, pink sapphires)as well as hard stones (chrysocolla, chrysoprase, chalcedony) , with a predominance of pink echoing the colour of the flower, and green for a fresh touch. 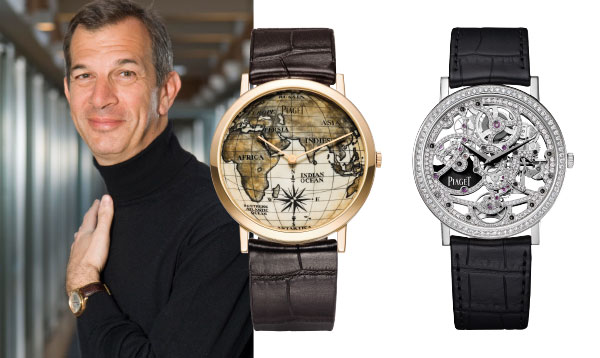 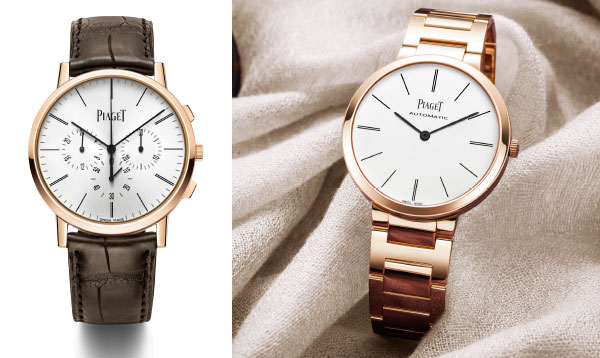