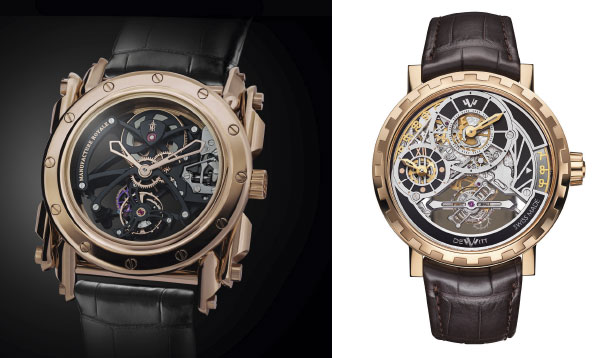 DeWitt presents its brand-new in-house tourbillon in an Academia watch, a signature creation from the brand distinguished by imperial columns on the caseband. While the movement is of classical construction, the displays adopts an innovative architecture: a rack mechanism is activated to make the hours jump, while a slip-spring causes the minutes to jump. These mechanisms are perfectly visible through circles cut out in a grid that recalls the inner workings of early 20th century industrial machinery. It opens up at 6 o’clock to reveal the tourbillon with its Swiss lever escapement, its balance-wheel oscillating at 18,000 vibrations per hour and its Straumann balance-spring with a Phillips curve. The Academia Grand Tourbillon also displays the date by means of an airy disk turning around the rim of the dial, along with the day/night indication appearing in white and blue on the equally grid-topped back of the watch.

To celebrate the 245th anniversary of the founding of the Manufacture Royale by Voltaire, the brand named after it is issuing two limited series of an extremely sculptural version of its Androgyne watch. Named Origine, it features the same sophisticated 52-part case distinguished by an ingenious mobile-lug structure designed to ensure maximum comfort on all wrists, whether feminine or masculine. The entirely skeleton-worked movement endows it with a highly original personality. Note the elegance of the slightly curved bridges and the transformation of the tourbillon, which is now of the flying type so as to enhance visibility. Manufacture Royale offers the Androgyne Origine in cases made of pink gold (20 models) or in black PVD-coated steel (45 units) engraved on the back with the 245th anniversary inscription.

To celebrate its 150th anniversary, Zenith has chosen to create the Academy Christophe Colomb Hurricane Grand Voyage II, the second version of a fabulous watch combining technical sophistication and decorative arts. A compendium of horological feats dedicated to precision timekeeping, it offers starring roles to the fusée and chain transmission system, a high-frequency regulating organ, and a patented gravity control module. While its artistic dimension is immediately perceptible on the dial side, it is most spectacularly visible on the back, with a vivid illustration of the conquest of America. The background with three ships and the applied elements – Christopher Columbus and his flag, the natives, the palm trees and parrot – are engraved and enhanced with vivid colors in a remarkable example of micro-painting. This technique was also used to depict the Southern hemisphere appearing on the mobile counterweight of the Gravity Control system.

Enriched with new developments, the Son of Sound Guitar model returns to the forefront. It clearly evokes a musical instrument with a dial adorned with soundholes and strings, a case shaped like a soundboard and pushers designed like tuning pegs. The latter serve on the one hand to adjust the hour and date, and on the other to control the chronograph functions. Some models are deliberately clad in rocker-style black, whether radically so as in the total-black tone-on-tone Black Betty interpretation, or featuring precious touches such as the Black Gold enhanced with ArtyOr – alloy of gold and recycled revolver bullets – on the bezel, keys and dial. These watches feature another exceptional detail in the form of strings made from genuine treated or non-treated gold. In a nod to musical history, the Son of Sound Guitar watches are powered by a personalized Concepto movement named Woodstock !

Launched in 2006 to mark the 100th anniversary of the House, the Poetic ComplicationsTM by Van Cleef & Arpels welcome two new models expressing the perpetual renewal of nature. Driven by a secretly sophisticated movement, their poetic dials spin on their axis in 24 hours, while passing beneath a mask, and their décors successively represent the hours of the day and night. On the Lady Arpels watch presented, a bird of paradise surveys the passing of a flower of paradise as well as a gleaming moon. Champlevé enamel, cloisonné enamel, engraved enamel, sculpted gold and diamonds all play a role in this ever-evolving tableau crafted by brilliantly skilled artisans. The motifs composing it are also reprised on the engraved caseback.

With the invention of an extraordinary gemsetting technique, Cartier sends diamonds dancing around the dial of a Ballon Bleu. Its initial vocation as a jeweler has enabled the House to acquire more than 160 years of expertise, constantly pushing the limits of technique throughout its history so as to exalt esthetic beauty. It now introduces the Serti Vibrant, a contemporary evolution of the famous en tremblant gemsetting that emerged in the late 19th century. Several patent requests have been filed for this system that thus naturally remains secret for the time being. One is naturally entranced by its visibly highly controlled effect : the diamonds appear to be suspended above the dial and vibrate in tune with wrist movements without knocking against each other. They create a wave of light with constantly renewed shimmering reflections, giving vibrant life to an exceptional ladies’ watch endowed with a particularly generous diameter.