The classical arts – architecture, sculpture, painting, music, poetry and dance – continue to inspire the art of watchmaking now acknowledged as the 12th Art. 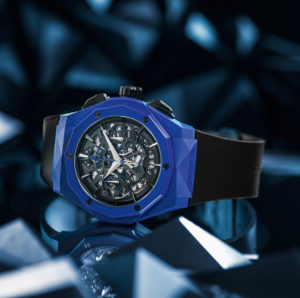 Hublot has associated with the sculptor Richard Orlinski, the most widely sold contemporary French artist (according to Artprice) in creating the Classic Fusion Aerofusion Chronograph Orlinski watch. Known for his works cut like diamonds, notably including a bestiary of ferocious animals, Orlinski has created a cleverly faceted composition smoothly integrating the case middle, bezel, crown and pushers. The entire construction had to be rethought to reproduce the original three-dimensional fold. The two models are naturally made from contemporary materials – titanium and ceramic – featuring a mirror-polished finish that is an iconic style signature of works by Richard Orlinski. 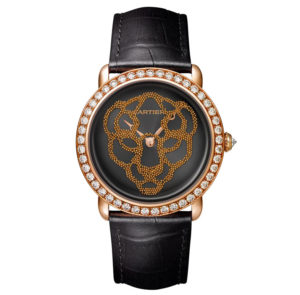 Cartier revisits the hourglass through a multitude of mobile gold beads dancing to a mysteriously orchestrated choreography of the Révélation d’une Panthère. When the watch is laid perfectly flat, the stylized head of the emblematic animal of the Maison stands out with perfect clarity. At the flick of a wrist, it disintegrates and indeed vanishes entirely to form a pile of beads around the edge of the stage. The magical to-and-fro movement creates the original sight of a fleeting decor that can be revealed at will. The allegorical creation of the passing of time is interpreted in three versions, distinguished by the color of their dials and straps. 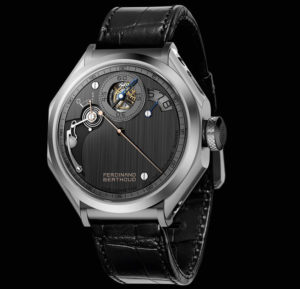 The contemporary Ferdinand Berthoud wrist chronometers are clearly in keeping with the marine clocks that the Maestro created in the 18th century. The movements are distinguished by a unique architecture, a pillar-type construction borrowed from that era, as well as a fusee-and-chain mechanism imposed by the quest for excellence in terms of precision. The latter is now suspended in order to save space and ensure exceptional visibility, unobstructed by bridges. The new creation, named Chronomètre FB 1R.6-1, features an original regulator-type display and an ultra-resistant case in carburized stainless steel, flanked by steel side pieces. Two lateral portholes and a sapphire crystal ensure complete visibility of this exceptional movement.

The Arceau by Hermès celebrates its 40th birthday by adopting vibrant paintings bolding proclaiming its equestrian inspiration. For the Arceau Casaque models, the round case fitted with stirrup-shaped asymmetrical lugs takes the form of an arena marked with curved hoof prints. Outlined against this background is the Cavale motif recalling small horse-head pawns of a classic French children’s board game. The dials crafted using the champlevé technique are hollowed to form cells that are then filled with lacquer. A tone-on-tone transferred herringbone motif sets the perfect finishing touch to their pure display, exempt from the usual sloping Arabic numerals. Perfectly smooth leather straps complement the brightly colored ‘jockey shirts’.

With the Métiers d’Art Les Aérostiers collection, Vacheron Constantin evokes a dream come true in late 19th century France : the first hot-air balloon flights. Based on historical drawings, the artisans have created five dials brimming with poetry corresponding to each of the five flights made between 1783 and 1785. The golden balloons are reproduced using the pounced ornament volume-engraving technique and each required three weeks of work. They are depicted gently resting on plique-à-jour enamel dials, a first for the Maison. As translucent as stained-glass windows, they discreetly and cleverly display the functions through skillfully arranged peripheral apertures.

A major first from Bulgari, the new Diva’s Dream jewelry watch tells time to music. This is a Minute Repeater especially created for women, the slimmest in the world in this category of horological complications. It sounds the hours, quarters and minutes on request in the collection’s typical case, distinguished by fan-shaped lugs. Its gold-spangled dial is crafted using the traditional artisan-style Japanese technique known as Urushi. The striking function is immediately identifiable by the tiny emblematically shaped petal suspended on the side, serving to slide the sidepiece that triggers the melody.