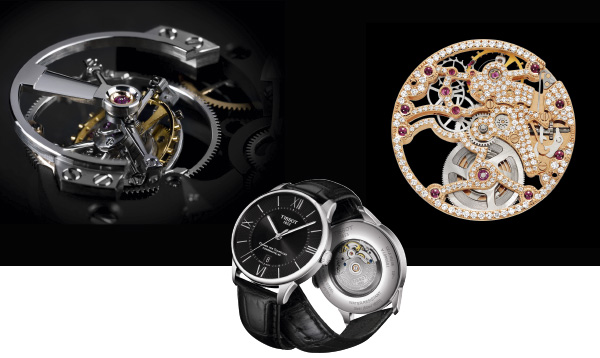 A mechanical movement is an expensive device and the main factor that determines the price of a watch. It all starts with its design. Whether a caliber is simple or complicated, its development can take an entire team between two and four years. The associated engineering costs are very high, especially since they occur years before the first watch is sold. It’s therefore tempting to take a short cut. One common approach is to clone, with slight modifications, a well-reputed caliber that has fallen into the public domain. But cutting development costs is only the start of it. The movement still has to be manufactured.

Whatever may be said to the contrary, watchmaking remains an industrial process. It involves working with metal; cutting it, drilling it and making it look good. For that you need machine tools. To equip a small-capacity all-purpose workshop costs at least 10 million francs. The size and number of machines depend on several factors, the first being the number of components in the movement. The fewer there are the fewer the manufacturing operations and the lower the cost. The next price determinant is the shape of the parts. Straight bridges, wire springs, the baseplate on one level — making it simple increases the productivity of the machines by reducing the setting up and production times. Determining the quality of the parts is crucial here. You have to find the right balance between the reliability required to avoid future problems, and their appearance. Finally the size of the machinery park will depend on the manufacturing output.

One factor that has relatively little impact on the cost of a movement is the material used. Most of it is made of brass with a few components in steel. Brass is cheap, easy to machine and to decorate. Some manufacturers use Maillechort, a slightly more expensive alloy, for their high-end products. However, it needs extra care because it scratches easily and the damage cannot be recovered. Fewer still use strong and lightweight titanium or even gold, which, though expensive, is easier to set with diamonds than steel.

The amount of work involved is in fact what the price of a movement is essentially based on. A movement can have its price increased fivefold, tenfold or even 30 times depending whether its decoration is perfunctory or state of the art. Surface treatment ranges from automated sanding to a mirror polish. The angles can be beveled mechanically or by hand. Everything hinges on the brilliance of the polish, the finish of the chamfers and the level of detail. These factors are not easily quantifiable except by the time they take. It involves pure handicraft. In Swiss watchmaking this is very professional and highly paid.

At this stage the movement is a collection of components that have to be put together. The simpler the caliber the quicker the operation : less than an hour in a manual assembly line. Added complications multiply the components and increase assembly times exponentially. The most elaborate complications can take up to a year to assemble. The time needed for adjustment is proportional to the quality aimed for in the development stage, which goes back to the movement’s conception and the choice of the balance and spring. The closer the rate is adjusted the longer it takes. It can take days for proper tourbillon movements. And, of course, all these factors pile up.

The final price-determinant of a movement has nothing to do with the time taken to make it but with the inherent margin. A brand that makes its own movements can transfer a greater or lesser proportion of the manufacturing costs to the client. However a newcomer to inhouse movement manufacturing – and there are many – cannot from one day to the next put up its prices 30 or 40% on the grounds that it has started manufacturing its own movements. The rise in costs has to be absorbed over time over time, with the brand banking on long-term profitability to amortize its investments. The alternative is more widespread: buy a ready-made movement from a specialist. The cost issue is the same, augmented by the supplier’s profit. The sinews in the watchmaking battle are above all economies of scale. The greater the production volumes, the lower the fixed costs for each unit. It applies to all industries and watchmaking is no exception.