For insiders and to get on the insider track 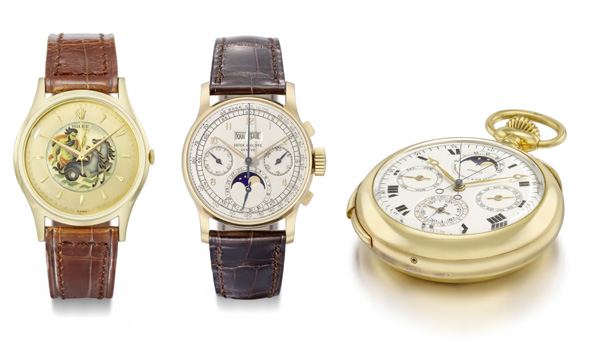 Nathalie Monbaron and Aurel Bacs from Christie’s watchmaking department admit that the estimates have not been easy to fix, due to changes in exchange rates and the volatility of the financial markets, which weigh on the minds of buyers and sellers alike from one week to the next.

However, intrinsically, this autumn sale has all the ingredients to stand out in the most positive way possible, with very rare flagship lots estimated at over a million, a wide variety of pieces of which a quarter, with no reserve price, are designed to appeal, a few anecdotal models, such as a James Bond Rolex with a buzz saw feature, and a wealth of complicated vintage wristwatches from private collections far above the average number. Note to those wishing to begin or round off a vintage watch collection without a common denominator – four lots of six watches whose grouping makes them stand out.

While just about all the great brands are present (Audemars Piguet, Cartier, Hublot, Jaeger-LeCoultre, Omega, Panerai, Piaget, Vacheron Constantin …) along with prestigious contemporary watchmakers (FP Journe, Richard Mille), Patek Philippe and Rolex make up the lion’s share with at least  50 pieces each.

Amongst the lots that will undoubtedly make the hammer buzz are three Patek Philippes, which, at more than a million Swiss francs each, should attract the attention of wealthier collectors. Reference 3449 is well known to consist of only three examples in yellow gold, including the one made in 1961 found by Aurel Bacs. This perpetual  calendar is estimated to be worth between a million and a million and a half Swiss francs, like the Reference 1579 in platinum, of which only three units were ever made and whose distinguishing feature is its facetted lugs.

On the same scale is the platinum pocket watch equipped with a tourbillion, created in 1932 and commissioned by well-known American collector, Henry Graves, whose family crest is engraved on the case with the note, Esse quam videri (Be, rather than appear). For less the half the cost (CHF 0.5 to 0.8 million), two pink gold Patek Philippes are bound to attract strong bidding. Reference 3448 is a legend and the existence of this one off model in pink gold was more the stuff of rumours than reality until its original owner suddenly produced it, with its case bearing the name of the South American jeweller, Freccero, for whom this unique piece was created in 1968. The original owner also relinquished the rare 1950, pink gold Reference 1518, in exceptionally good shape.

Estimated to be worth at least CHF 200,000, the Rolex worn by Roger Moore in James Bond “Live and let die” is completely different. The 1972 Reference 5513 was completely modified by British cinema designer, Syd Cain, who replaced the movement with a mini-turbine allowing the bezel to rise up and rotate at great speed when compressed air is blown into the watch, thus enabling it to play its famous onscreen role as a buzz saw.

Be it 007’s watch or the other 426 lots, this auction promises to be thrilling, so make sure you don’t rush but be sure to bid in due time.