Patek Philippe is forever and the Daytona turns 50 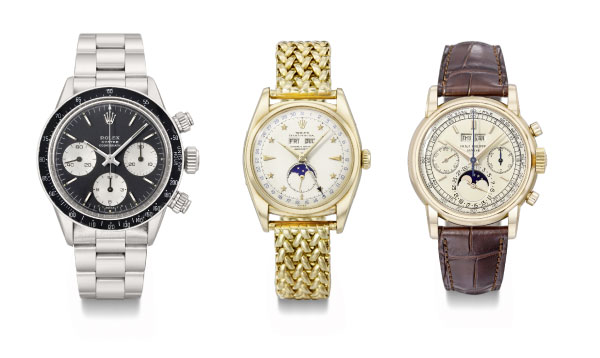 In 2013, collectors’ Christmas will fall on November 10 and 11 and the story for the first evening will be named Rolex Daytona Lesson One and will bring together 50 dream lots, while the next day’s will feature 357 lots consisting of one-third Patek Philippe models, one-third Rolex and one-third contemporary and pocket watches. Aurel Bacs, who heads up Christie’s watchmaking department, and Nathalie Monbaron, describe the flagship lots.

The strongest and most prestigious section on November 11 is naturally that with the vintage Patek Philippe complications, which will start with the reference 2499 series in pink gold consigned by a private individual, estimated at between 1 and 1.5 million francs and of which fewer than ten are known today. The initial ones have all been sold at Christie’s since 2008, and this one has been kept in exceptional condition with a case that has never been polished and an ivory dial – a collector’s dream  !

The second flagship lot, the reference 1563 is a split seconds chronograph in yellow gold of which only three examples have been identified, each time specially ordered by privileged clients that have personalised the dial. The one that belonged to Duke Ellington joined the Patek Philippe Museum, the other a private European collection after being auctioned at Christie’s, while the estimated value of this lot with its very exclusive dial featuring luminous Breguet hour-markers is climbing from 800,000 to 1.4 million Swiss francs. For the vast majority of the other references up for auction, this is their first appearance. The choice includes chronographs, perpetual calendar chronographs, perpetual calendars, minute repeaters and travel time models.

The second section of this important day highlights a good hundred Rolex watches, including sports models (Milgauss, Sea Dweller, Submariner) and others. In the non-sports category, the reference 6062 is the only Oyster showing the date and moon phases ever created by Rolex. Christie’s is offering two fresh to the market versions consigned by individuals and in a perfect state of repair with one in steel, one in yellow gold featuring a dial with star-like hour-markers and a vintage bracelet, accompanied by a description in the literature that further increases its value. After the success of the Palladio sale in May 2013, the collection built over a quarter of a century by a European architect focuses on steel chronographs, of which Christie’s is now auctioning the remaining items.

Diversity through the ages

The third and somewhat more heterogeneous section consists of pocket and contemporary watches. The first are largely Breguet with a flagship lot ordered by the Duke of the Infantado in 1802 which required four years to produce, a watch with a natural escapement of which the upper estimate amounts to half a million francs. Amongst this selection of Breguet watches from 1802 to 1833, prominent models include one of the first crown wound watches, as well as a “Royal” watch sold to King George IV of England in 1825 and estimated to be worth between CHF 80,000 and CHF 120,000.

With a sumptuous gold, enamel and pearl watch made for the Chinese market around 1820, Bovet and its enamelled scene attributed to Jean-François-Victor Dupont are not left out, with estimates ranging from CHF 90,000 to 140,000. Who can better that ? Maybe the contemporary watches ! The choice has rarely been of such high quality. While watches by Audemars Piguet, Breguet and Cartier obviously warrant interest, two highly unusual models are particularly noteworthy. Firstly a unique Lange piece, the only known special order in history by A. Lange & Söhne. Then there is the second Voutilainen to appear on auction, after one sold by Christie’s at Hong Kong for a quarter of a million dollars at the beginning of the year. Here too Patek Philippe remains unbeatable with two totally new quartets in the shape of reference 5070’s four variations in platinum and white/yellow/pink gold as well as the four creations in the Advanced Research line. None of them have ever been offered simultaneously on auction.

Putting all the trumps on its side for this thematic Daytona 50th anniversary sale, Christie’s has enlisted the services of Pucci Papaleo, the pope of Daytona, and author of the ‘bible’ of the same name (The Ultimate Daytona). Together they have selected 50 perfect pieces that reflect the history of the cult model between 1963 (when it was called the Cosmograph and was only sold on the American market) and 2013, when the platinum version unveiled at Baselworld was not yet available in the shops. The range of lower estimates of the watch that revolutionised the appearance of Rolex chronographs with its tachymeter scale on the glass runs from ten thousand to three hundred thousand francs. The special order for the Peruvian Air Force should also be mentioned, the “Jean-Paul Belmondo” Daytona worn by the actor in Peur sur la ville and l’Animal as well as ten or so “Paul Newmans” in steel and gold. This model was indeed worn by the American star both onscreen and in real life as well as during his team victory in the legendary Daytona race in 1955. In another dimension, a showbusiness star might well set his sights on the reference 6269 in yellow gold with the glass and dial set with diamonds or the rare gold “Rainbow” set with multi-coloured baguette diamonds. But the flagship lot comes from the Middle East in the form of a Daytona – ordered by His Majesty Qaboos Bin Said al Said, Sultan of Oman, whose signature is engraved on the dial – of which the value is estimated at an incredible half a million francs. Lesson two in the spring ?