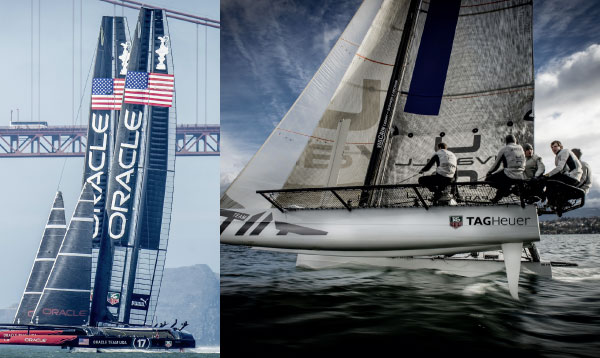 The only watchmaker to be aboard the America’s Cup, the Youth America’s Cup and the D35 Lake Léman championship, TAG Heuer has been setting full sail to accompany the expansion of its Aquaracer line. Already active for decades on the America’s Cup scene, the world’s leading sports chronograph brand chose to back the Defender of the 34th America’s Cup, Oracle Racing – thus ensuring omnipresent visibility on the streets of San Francisco and under the Golden Gate Bridge. Throughout the two previous years, Oracle Racing also bore TAG Heuer’s famous red and green logo on its two AC45 rigid-wing catamarans taking part in the America’s Cup World Series. Heading the Oracle team, Russell Coutts is doubtless the world’s most famous and titled sailor with a list of accomplishments that already encompasses four America’s Cup participations. In parallel, the Swiss brand synonymous with performance also supported the Swiss team qualified for the Youth America’s Cup, Team Tilt. These 19 to 23 year-olds from the Lake Léman region distinguished themselves among international sailing’s up-and-coming generation, currently dominated by New Zealanders, including by a noteworthy win in the last race – with a full 22 seconds lead over the next boat. Upon returning from California, the future yachting elite resumed the D35 championship featuring the Swiss-built high-tech catamarans now well known to the world’s finest sailors. They enjoyed the opportunity to race against their heroes, the crew of Alinghi that brought the America’s Cup “golden ewer” to Switzerland ten years ago. Towards which new nautical adventures can we expect to see TAG Heuer charting its course in the coming years ?
<
>