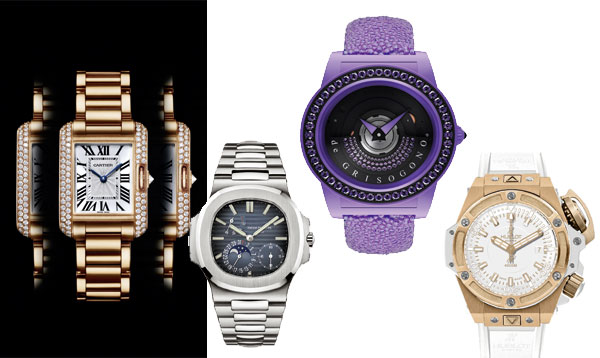 Despite the serious economic crisis that Italy is currently going through, watchmaking is still enjoying considerable success and continues to have a high profile. While today it is no longer our nation’s watch devotees and collectors who are making the big purchases and dictating tastes and trends to the entire world, as they were in the 80s and 90s, fortunately foreigners are taking over. This means that in spite of the crisis affecting the Italian economy as well as its institutions and its environment, the “Bel Paese” remains a privileged destination for tourists and the nouveaux riches alike, who visit the length and breadth of the country and enjoy the unparalleled beauty of its landscapes, its art-filled cities and its gourmet and cultural delights. Many retailers thus reap the benefit of the leisurely stays of all these Russian, Arab, American, Chinese and other oriental visitors. The longstanding tradition of luxury and fashion, combined with the good humour that this country inspires in holidaymakers, undoubtedly favours a purchase as emotional as a watch.

We talked to retailers in Sicily, in Taormina, Catania and Syracuse (Giovanni Restivo) and in Sardinia at Porto Cervo (Floris Coroneo) and at Forte Village (Alberto Barresi), as well as in Riccione, Milano Marittima and Cortina (Carlo Bartorelli). They all agree that the models that sold the best during the summer saeson were sports watches for men and more elegant, but discreet, watches for women. During the summer season, people seem to prefer sports models, while for more classical models which require more thought, watch fans tend to prefer buying them in winter through tried and trusted retailers at home.

Alberto Barresi, whose clientele is mostly from Russia and Northern Europe, lists the brands and the models : Franck Muller Conquistador Grand Prix GPG and Long Island, Piaget Polo 45 and Twice, Ulysse Nardin Marine and Maxi Marine Chronometer, as well as the big success of the year, the new Tondo By Night from deGrisogono. Carlo Bartorelli for his part confirms a strong Russian presence and an increase in the Chinese clientele. The best-selling models during the summer in his boutiques were Patek Philippe’s Nautilus, Hublot’s King Power and the entire Rolex range. Two brands that survive all fashions deserve particular mention – Cartier, which has always been a leader in ladies’ watches and Panerai, an Italian brand that is much appreciated by foreigners particularly for its attractive price to performance ratio. All of them announced a mostly positive evolution at the end of summer, made possible by a constant quest for the best models to offer clients.

The Indian luxury watch market has taken off in recent years following the entry of the world’s top brands. The growth rate in sales is upwards of 20%. India’s rising affluent and young population, with their taste for brands and luxury, is coupled with the rise of Tier II and Tier III cities as major demand drivers for this segment. Watches are one of the new accessories, which make you stand out. The Indian consumer, while being a value seeker at all stages, has an eye for good quality, heritage and exclusivity. He is better aware and is making informed decisions based on brands’ watchmaking history, their popularity within the market & the price range – not just in India but also in other Asian countries. The best season for sales in India usually starts from the festival of Navratras, reaches a peak at Diwali and maintains a consistent pace until Christmas & New Year. This period also coincides with the marriage season, which continues through to February-March. Gifting of luxury goods including watches represents a good portion of sales during this season. The growing economy is India’s biggest pull. Hitherto India lacked luxury malls and high streets, which are now appearing. The next generation of India’s retail environment (often family owned) is favorable for the rise of luxury goods.

For Sandeep Kapoor, Managing Director of Kapoor Watch Co in Delhi, today’s consumer is younger, well informed and willing to experiment, even with lesser known brands, bigger sizes or different metals. Brands that were not so popular in India before today are much in demand, such as Breitling, Roger Dubuis and Hublot. Audemar Piguet on the other hand with its new Millenary and Offshore collections is a preferred choice for the sophisticated affluent consumer. Sandeep is quick to add that this change is not at the expense of Rolex or Omega, which have continued their robust growth story with their two-tone models which are doing exceedingly well. He comments that brands need to invest more in expanding their network and brand visibility in India. Indians are good shoppers and know that they can get better deals here itself. However, accessibility is restricted to key outlets in main cities.  Kapoor Watch Co was established in 1967 and is a leading watch retailer in Delhi with 6 outlets at present. They are now expanding its establishment to newer cities in light of the growing needs of this segment.

Ms Ivana Perovic, CEO of AP Group says AP Group has been in the business of distribution and retail of International luxury and premium brands for over a decade. As retailers they are based out of Mumbai with Swiss Boulevard in South Mumbai and Watches of Switzerland in Bandra. Brands like Rolex, Audemars Piguet and Cartier have been a popular choice with the high-end customers. Watch models like Rolex Datejust, Yatch-Master II, Omega Constellation and Gc Sport Class XXL are doing very well for this company, but it has in the past decade observed a change in the consumer trend, with unconventional brands such as Greubel Forsey, Hublot, Corum and Gc being increasingly sought after.

The Johnson Watch Co founded in 1950 is a leading retailer of luxury watches in India, based in Delhi.  Ankit Madan, Director of JWC, shares that the Indian luxury watch buyer is very well travelled and knows a lot about market trends. The extent of marketing done by the brands also reflects how active they are within the market and thus each leaves a unique impression on the end consumer. “Rose gold is a preferred material in our market. People in India like two-tone (steel and gold) watches and Omega and Rolex do very well here. Gifting of luxury goods represents a good portion of sales during the festive season (Oct – Feb).” Among their bestselling brands are Breguet, Vacheron Constantin, Jaeger-LeCoultre, IWC, Cartier, Ulysee Nardin, and Panerai”

“Growth has certainly been more robust in the segment than any other retail category, bearing in mind that prices of luxury watches have increased around 10% in the past year or so”, says Chandigarh-based Yashovardhan Saboo, founder of KDDL that runs Ethos, the largest retail chain in India for luxury watches. Saboo says the next thing for India is to make the shopping experience a better one. As retailers they must help understand the legacy of brands so as to help their customers make an informed choice. Pan India presence is also of essence given the widespread economic growth visible in India. “What you will see next is a consolidation phase” says Saboo, adding that “in terms of trends, mechanical watches will rule. “Another trend will be growing demand for sporty and semi-formal watches and multiple ownership for various occasions”.  People will also experiment with lesser-known brands. The most popular brand at his stores so far are the conventional ones : Rolex, Omega, TAG Heuer, and they also sell more of Breitling, Carl F Bucherer, Hermès, Hublot too.