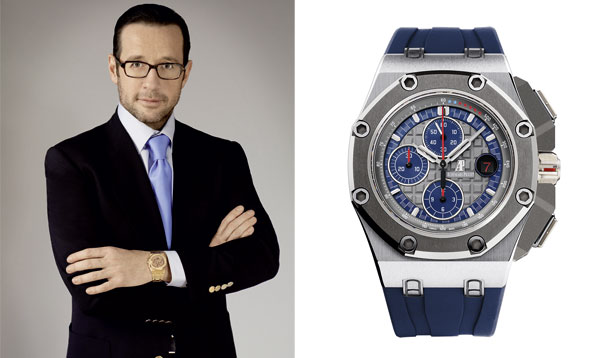 What were the first things you did when you became head of Audemars Piguet ?

Despite having been with the company for 18 years and at the head of the American subsidiary for 13, you don’t go from 70 employees to 1200 without taking stock of things. Since June, I have been watching and listening, while trying to bring together teams working on common projects, helping us to define our objectives and gauge our potential. After having let things go a bit over the past few years, the brand is “going on a diet and fitness campaign” before returning to the arena on top form.

To complete this necessary transition phase successfully in order to get off to a flying start in 2014 ! I would like to be there already but first things first. To start with, our distribution and our production need to be adapted. Audemars Piguet is unable to supply its best retailers adequately, so we need to strengthen our ties and synchronise our production with their needs, as well as reducing the number of points of sale. We have over 500 today and this number will be reduced to 300 over the next two years. Our bestseller, the new 41mm stainless steel automatic Royal Oak with a white dial, should be available to them faster, for example. Being an independent company gives us the enormous advantage of being able to adapt our rhythm to our needs and thus to react faster.

Can the methods that made Audemars Piguet successful in the USA be applied to the rest of the world ?

Every region has its own characteristics and common sense is not simply American. On the other hand, one learns from one’s mistakes and corrects them. I depend on a certain amount of “farmer’s wisdom” and I bring a management style based on efficiency to the company. When Jasmine Audemars read Yoda’s quote “Do or do not, there is no try” on my office door, she added, “today it is not the biggest who eat the smallest but the fastest who eat the slow”. Our rejuvenation will take us to the next level.

What is your position regarding China ?

It is undeveloped territory for Audemars Piguet and we still have a serious job to do laying the building blocks there, although it is out of the question to base everything on this. As we have done in the States, we need to get to know the mentality and the cultural keys that pave the way to success. Today, we have a good sales spread between Asia, Europe and America and I would like to maintain this balance.

How would you define AP today ?

The brand DNA has always incorporated a sense of being on slightly different wavelength, which is something that I wish to reinforce. Without wishing to appear arrogant, I would like to turn AP into the Apple of the watchmaking industry. I don’t want to hear any more that things have been done like this for 150 years and there are no other avenues to explore. I want to create new standards for Audemars Piguet. The end consumer must be our priority and everyone must be aware of this at every level of the company. Only excellence in every sphere will allow us to provide a better client experience. Our products and ambassadors have been copied so in future we need to show that we are stronger and faster than our competitors.

Do you think that mentioning “Le Brassus” in the new brand signature presented at the 2012 SIHH will result in increased watch sales ?

We will see if it helps sell more watches, but it already helps us to talk about the brand more. We come from Le Brassus, so why not promote our origins? There are amazing tales to tell in explaining where we come from and how we are where we are today.

In your opinion, what model best represents the 12th Art (The Art of Measuring Time)?

In my conception of measuring time, I would say it is more a function or movement that should represent that, rather than a model. When you think that the main functions were designed without computers around a century ago – such as leap years, dual time zones, equation of time, perpetual calendar – it’s fantastic! I would draw a comparison with Frank Sinatra’s song, New York, New York, which is just as beautiful 50 years later, even when reinterpreted by Jay-Z and Alicia Keys. This is also about the art of being able to survive through the ages.

What should the Swiss watchmaking industry beware of today ?

Undoubtedly its pride and complacency. Coming back to the end client, we are all somewhat resting on our laurels. People who have the privilege of having access to luxury generally receive better service in other industries than they do in ours, notably when it comes to repairing watches, which often takes far too long. We need to have a long, hard look at ourselves so that clients are still saying, even long after they have made their purchase “it’s the best thing I’ve ever bought”. With respect to the global economy, the watchmaking industry is doing pretty well and now is the time that it should be thinking of reviewing its standards and drawing inspiration from other sectors.

Has the crisis resulted in Audemars Piguet Foundation projects being put on hold ?

Absolutely not and the Foundation’s budgets increase all the time. Not only is this project particularly close to Jasmine Audemars’ heart, it also has other attributes that I have been party to in building the brand’s American success through charity endeavours. Audemars Piguet is fortunate enough to be a luxury company and as such, has an obligation to give something back, an approach that is part and parcel of the social honesty that all high-performance companies should display. The luxury industry could become far more involved in charity projects than it is today, and I have always personally encouraged managers publicising strong growth to match this expansion by generosity towards the more disadvantaged.