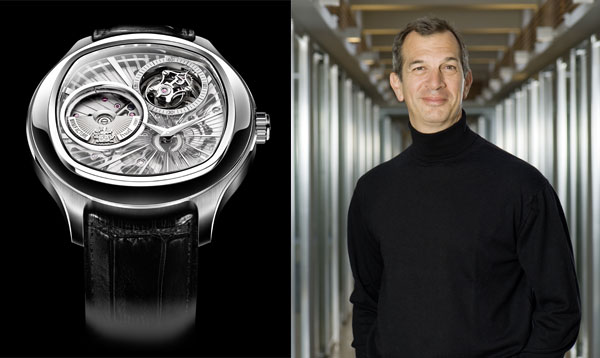 Ten years ago at our first interview, you were inaugurating a new boutique concept in Monaco and you had 700 retailers worldwide; what’s the current state of your distribution network ?

We currently have 500 retailers, since we have opted to favour quality rather than quantity. In May we opened the 73rd and 74th Piaget boutiques : the 7th in Hong Kong and the 5th in Macao. Our strategy consists in developing the two distribution networks in a totally harmonious way, with each accounting for an equal proportion of our sales.

Production volume has remained the same in terms of units, but their value has rocketed. In 2001, 70 % of them were quartz models, whereas today two-thirds are mechanical watches, entirely developed and crafted in-house. We do not outsource any movements and we sell what we know how to make. Not only has the average price risen dramatically, but the vertical integration of our distribution network has further enabled us to increase our turnover.

At the time your favourite model was the Emperador; have your tastes evolved ?

Let’s say they have broadened. I often wear the Emperador Skeleton, which combines the profession of fine watchmaking manufacturer with that of goldsmith, but I also really like the classical elegance of the automatic Altiplano watch. On weekends you’ll tend to see me with a Polo 45 chronograph because of its casual style that appeals to me.

Which product launched in the past two to three years has surpassed your expectations in terms of commercial success ?

All of them ! The Altiplano watches in particular are enjoying phenomenal development, it’s the benchmark watch within the range and best embodies what Piaget stands for today : contemporary elegance. Men are rediscovering the joys of ultra-thin models and it has become a must in our collection. In an entirely different style, the success of the Magic watch means it is destined to become a classic in the field of ladies’ jewellery watches.

That’s a tough question. Piaget has been creating watch products since 1874 and jewellery since 1960, so it has genuine credibility in both areas. Few brands manage to maintain an equally enduring appeal to both men and women. We have not succumbed to the temptations of product diversification, and that has helped us channel our energy. In 2001 we took the decision to have an exclusive brand and to make only gold watches by concentrating on three sectors : ladies’ watches, men’s watches, and jewellery. We were determined to make Piaget a well-known, recognised, global and strong brand. That implied achieving critical mass. Given that 85 % of the value of Swiss watch exports stems from mechanical watches, we have invested in our production facilities in order to develop our own movements. Today, ultra-thin watchmaking can be considered our trademark, and the Altiplano line indeed represents the highest sales volume. In parallel, the Polo 45 has given us access to the casual sports segment and earned Piaget a new clientele in Europe and in the United States. We are also still very strong in the domain of jewellery watches with the Limelight collection, and we have a lot of demand for concept watches such as the Magic which rotates in three positions, the Twice which can be turned over, as well as Dancing Birds. At the end of the day Piaget’s position is defined by classic elegance for men and incredible creativity for women, and sales are pretty equally divided between the two.

What does Piaget’s new muse Jessica Alba embody in your view ?

Above all beauty, but also youth. She does not appear in advertisements, but serves to create media buzz around the brand. In 2001, I would doubtless have turned down the proposal, but such buzz is definitely needed today. Piaget must remain an exclusive brand, that’s for sure, but in no way an arrogant one. The Possession collection provides contact with a younger clientele represented by Jessica Alba.

Do you think it’s still possible to launch a new brand today ?

I think it is. It would have to be a niche brand, because the cost of launching a new product and achieving global visibility is extremely high. For example, rental prices in China have tripled in five years ! Moreover, customer service remains an essential factor and undoubtedly the biggest handicap for a brand in the making. One element that can help new brands to emerge is that the big brands now tend to operate via their own subsidiaries and so traditional distribution agents are therefore looking for new brands. I think it’s great that people such as Max Büsser, or Thierry Oulevay who used to work with Piaget, have launched their own brands. The niche occupied by Urwerk is also fascinating. Look at success stories such as Richard Mille, they are simple fabulous. Together, they have awakened the sleeping beauties of our industry.

What is in store for Piaget in the coming decade ?

Despite economic ups and downs, each brand must maintain a continuity in its philosophy and its style; we are not going to revolutionise anything, but instead pursue our brand history. Ultra-thin watchmaking will remain the core of the Piaget DNA and we will doubtless focus on developing Grande Complication models that we don’t yet have. The peak of the haute joaillerie segment still features strong growth potential, and our boutiques will probably offer more jewellery collections and will continue to growth at a rate of ten or so per year. Our production should cross the 30,000-unit annual threshold and the greatest challenge will lie in training enough watchmakers, jewellery and gem-setters.