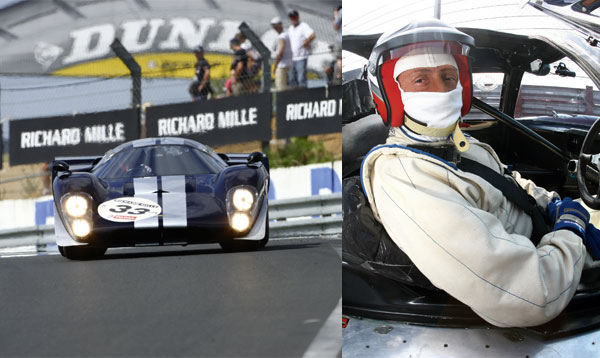 From a very early age, in my dreams! For the past two years, in a regular way. Meanwhile, I’ve worked a lot on the one hand, and become the father of seven children on other! As my friends on the racing tracks like to joke, I’ve become a professional driver who also does some watchmaking.

What sparked this interest?

Definitely the Le Mans 24 Hours. I discovered this race at the age of 14 by watching it on TV, and was completely hooked. As soon as I earned my first salary, after the very first month (and while still in the trial period!) I bought an Alpine Renault car. I love legendary models and my collection also includes a Porsche 910, a Lancia Stratos, a few Formula 1 cars (including BRM, Ferrari and McLaren) – all in working order of course – but I actually race in my small Lola T70.

The 2010 edition of the Le Mans Classic, naturally because of the incredible success of the event itself, but especially for my own performance there. We have been sponsoring the Le Mans Classic since it was created in 2002, when it drew less than 8,000 spectators. Last summer, more than 100,000 attended it, over 450 cars were involved, and reactions were universally positive. Normally I never have much of a chance to enjoy it because I am busy hosting my clients, friends and partners, but this time I had promised myself I would take part and I had a fine race which gave me a great deal of satisfaction.

Of which performance are you most proud?

My podium position in the 2010 Classic Endurance Circuit, where I was ranked third at the end of the season.

What would you see as the ultimate objective?

Not to veer off the track! Thus far there have been very few accidents, apart from a few inevitable spins and when a friend hit my car at over 200 km/hour, but fortunately with no serious consequences.

The dream place you would love to race in?

At Laguna Seca, in California. It’s a truly spectacular track in the middle of the desert and surrounded by rattlesnakes.

How does this passion influence your professional life?

Relatively little, because I know how to keep things fairly balanced and compartmentalised. I drive racing cars whenever I can, but it takes time. It’s extremely physical and it gets very hot in the cars, and basically it relaxes me.