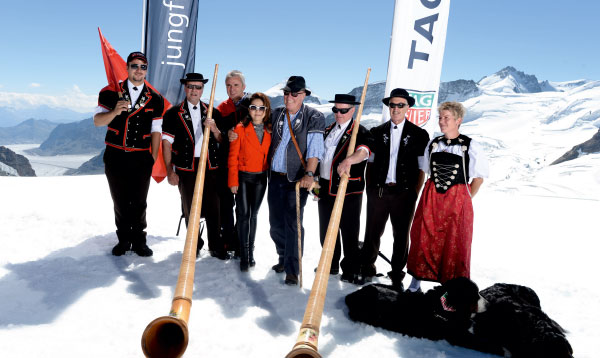 With Jean-Claude Biver’s strong personality and incredible record of achievement in the watch industry, it’s little surprise that someone wanted to publish his biography (it was released in September 2015 in French). In his role as CEO of TAG Heuer he continues to forge ahead in his irrepressible style, orchestrating a number of high-profile events designed to put the brand firmly on the map. A new advertising campaign, a new partnership as official timekeeper of the German Bundesliga, as well as deals with the hippest DJs all came in just the past few months. The brand even organized a pop concert on the “Top of Europe” (Switzerland’s Jungfraujoch) with Chinese pop sensation G.E.M. – just as the country’s stockmarket movements left a trail looking like a rollercoaster ride and the yuan saw its biggest devaluation in two decades. As Mr Biver said at the announcement of the partnership with the Bundesliga, “I would rather it be TAG Heuer’s name here than some other brand.” It’s an attitude that others could do well to follow.

A question of provenance

Long a bone of contention within the industry, conditions that need to be met in order to put the all-important “Swiss Made” on a watch dial will be amended thanks to a new “Swissness” law passed by the Swiss parliament. Under these new rules, which were backed by the Federation of the Swiss Watch Industry, the “Swiss” value of a product must be at least 60% and the activity that gives the product its main characteristics must be carried out in Switzerland. Good news for Swiss watch exporters, but let’s not forget that they don’t have a complete monopoly on fine watchmaking: A. Lange & Söhne also has much to celebrate this year. With a brand-new production building opened 200 years after the birth of Ferdinand-Adolph Lange by none other than Germany’s federal chancellor Angela Merkel, the country’s remote watchmaking outpost now has excellent foundations for its continued development.

The big news over the summer as far as the watch industry is concerned came from the organizers of the SIHH. While Ralph Lauren leaves the halls of the Palexpo to concentrate on its home market in the US, the SIHH is set to welcome a number of independent brands in a new “Carré des Horlogers”. The new space increases the number of exhibitors from 16 to 24. But this is just the beginning, as Fabienne Lupo, President and Managing-Director of the Fondation de la Haute Horlogerie, which organizes the SIHH, explained in an interview with WorldTempus. Expect more new exhibitors over the next couple of years.