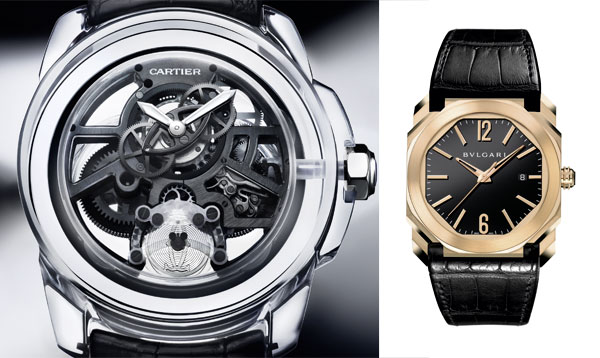 Bulgari’s new Octo : Italian design softens the angles and plays on the effects of volume

The sky still hasn’t fallen on our heads. Watch exports are still doing well : +15% on an annual basis for the month of July and +12.7% in August. Parallel to this, signs of tension are reappearing in the labour market in the watchmaking valleys. It is going to be tough to train the 3,200 new employees required by the sector by 2016, above all given that the watchmaking job market already welcomed 4,200 people between 2010 and 2011. Large listed groups like Richemont and the Swatch Group remain cautious about their medium-term outlook. A slowing of growth in China has been announced. During 2012 and 2013, it is expected to remain above …7.5%. It is not yet time to get out the life rafts.

Someone leaves and someone else arrives. Swatch Group administrator and responsible for the Swatch brand, Ms Arlette Emch, suddenly retired at the strictly legal age of 65. Her responsibilities have been taken over by Mr Nick Hayek, CEO of the group. On the other hand, Audemars Piguet has appointed a new CEO – Mr François-Henry Bennahmias, hitherto president of the brand’s American subsidiary, who is also taking over ad interim Mr. Wolfgang Sickenberg’s responsibilities as sales director. (Read his exclusive interview on page 56). Contrary to these separations, we have the pleasure of announcing a wedding – or at least an engagement. Bovet has signed an agreement with Zurich distributor, DKSH. The latter, already a major shareholder of Maurice Lacroix, has acquired 20% of the Fleurier brand and will cover the centralised distribution for the Asian sector.

Le Sentier has finally re-opened its museum. The Espace Horloger de la Vallée de Joux (EHVJ) was inaugurated after eight months of renovations. Some 60 kilometres from here, the 12th Geneva Watchmaking Grand Prix is getting ready. Under the auspices of Mr Carlo Lamprecht, the 70 candidate watches, divided into seven categories, are now being selected. The winners will be announced on Thursday, November 15th.

The other long awaited competition will take place in 2013. The Concours International de Chronométrie (International Timing Competition) in Le Locle will organise its third event, confirming the validity of its concept as well as the prevailing interest in an objective confrontation between the brands. On the glamour front, two important launches have taken place. Cartier Manufacture welcomed the introduction of lubricant-free Concept Watch, ID2, made of transparent ceramic, amongst other innovations (see p.38). The other new release focuses on the power of its aesthetic appeal. Bulgari’s Octo has been re-thought and launched with great pomp and ceremony in Rome. It is angular and unique and makes an impact which has always been the Italian brand’s strength. On this national note, a little word about the Olympic Games’ Swiss-Jamaican duo. Richard Mille and Hublot were on the podium. Respective sponsors of Yohan Blake and Usain Bolt, they dominated the 100 metres, the 200 metres and the 4x100m relay, no less…