The Mastery of Time: the watchmaking art goes on show 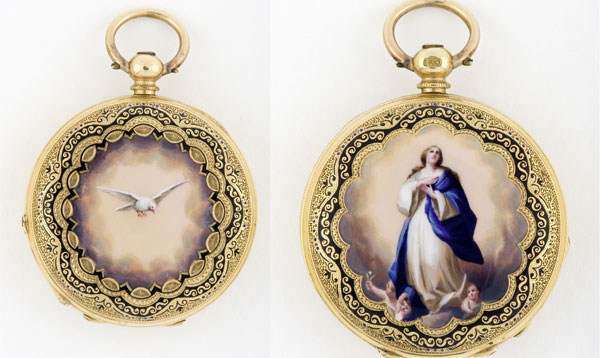 Some would say that certain historical and even contemporary watch models are genuine “jewels”. And understandably so, for in humankind’s quest to master its temporal environment from its origins to the present day, timepieces have represented the progress of both science and art. Few achievements born of human genius testify quite so vividly to the slow and progressive mastery of techniques applied both to the mechanics of time, and to ornamentation calling upon artistic crafts such as engraving, enamelling, chasing, gem-setting. The aesthetic aspects indeed initially compensated for the flaws in the technical timekeeping virtues of the early models.

Geneva, cradle of the enamelling art

The Mastery of Time exhibition by the Fondation de la Haute Horlogerie is intended to mirror this evolution. Successively presented in Mexico City, London and Paris, it is designed as an initiatory journey through various ages and styles aimed at promoting an understanding of what contemporary watches owe to these “artists” of yesteryear. One example is particularly eloquent : 18th century Geneva, the ancestral birthplace of enamelling. This small geographic area was home to the finest artisans of the era who decorated pocket-watches with champlevé or cloisonné enamelled motifs, an art that would also be fully expressed on the so-called “Chinese” models intended for the Celestial Empire and specially developed to withstand the damp climates in that part of the world. China was already a favourite destination for Swiss watchmaking. It was also Geneva that nurtured the emergence of the flux enamelling technique  consisting of magnifying the motifs by means of a colourless layer of enamel serving as a protective glazing.

From gnomon to atomic clock

No need to list the countless different examples: watch models have consistently provided a favourite field of expression for the finest artists and artisans. Perhaps because they were initially the exclusive preserve of nobility and statesmen. As time measurement became more accessible to a broader audience, it definitely made up in technical terms for what it lost in the domain of artistic symbolism. Nonetheless, this statement cannot be universally applied to certain contemporary watches, since the artistic crafts are more vibrantly alive than ever. The grand Manufactures strive to perpetuate this time-honoured tradition which holds that a timepiece should be far more than a mere time-keeper. The exhibition by the Fondation de la Haute Horlogerie serves to foster an understanding of this longevity. The meandering path from the gnomon to atomic clock also leads through the lush fields of art.