Worldtempus : Higlights of the last quarter 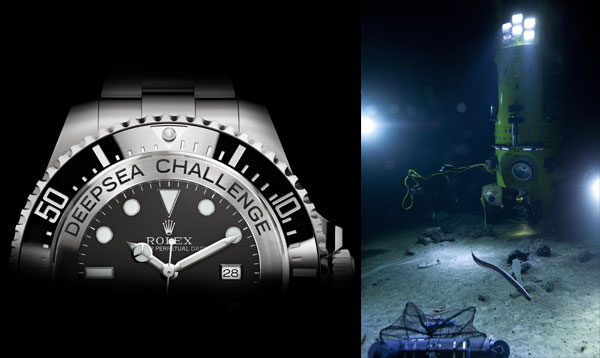 The Rolex DeepSea Challenge descended to a depth of 10,898 metres, but can actually reach 15,000 metres

For years, some sort of measures had been called for. The Federal Government has now voted a law strengthening the provisions of the Swiss Made label. Parts made in Switzerland now have to make up 60% of the total value of the watch, as against 50% previously. But parallel to this, Japan caused two minor Swiss earthquakes. The Citizen Group bought the La-Joux Perret group, which meant the manufacturer of mechanical movements managed to avoid falling into the hands of a brand which would have absorbed its entire production ; and TAG Heuer will from now on be buying regulating organs, including balance-springs, from Seiko.

These trans-national manoeuvres are not the only ones to transform the watchmaking landscape. Bernard Fornas is gearing up to hand over as CEO of Cartier in order to take on responsibilities on the board of Richemont. He will be replaced by Stanislas de Quercize, current CEO of Van Cleef & Arpels, who knows the company well, having been President of the North American operations. Jeweller and Watchmaker  de Grisogono has been taken over by a group of Angolan investors, while Hautlence has announced the arrival of new shareholders led by Georges-Henri Meylan who are making a friendly takeover. In Germany, Chronoswiss has also been bought by Swiss investors. Times have thus been tough for the small brands, particularly those of French origin: Alain Silberstein liquidated the company bearing his name and Pequinet has filed for bankruptcy.

All of these capitalist and strategic moves must be viewed within a feverish economic context. Statistics for watch exports continue to burst the ceiling with +20% in February and +15% in March compared to 2011. In the background, the Asian markets continue to grow, but for how long ? The transformation of the Halls at Baselworld is in full swing. In 2013, a whole new Basel Show, revised and enlarged, will open its doors. The watch groups are consistently growing and expanding their premises. Projects to extend manufacturing facilities follow on from one another, quarter after quarter. TAG Heuer near Porrentruy, Richemont in Geneva, Panerai in Neuchâtel and IWC in Schaffhausen are each starting work on new buildings. In parallel, vertical integration of production includes the integration of suppliers, such as dial maker, Natéber, which was bought up at the end of April by La Montre Hermès. For brands looking for an alternative to the Swatch Group for sourcing movements, Concepto proclaims its capability of producing 400,000 regulating organ kits in 2013.

Getting married and moving house: love is in the air. This is quite literally true at Franck Muller, which has begun a new wedding organiser activity. The offer is focused on its favourite market – Japan – where the brand offers a complete service, from the cake to watches and wedding rings. Rolex’ love story with great explorations is still alive and well. In partnership with movie maker, James Cameron, the brand sent an experimental DeepSea Challenge secured to a submarine to a depth of 10,989 metres underwater. Parallel to this, it has lost a prominent albeit involuntary ambassador, since Nicolas Sarkozy was effectively beaten by François Hollande. The French Head of State is ostensibly going to switch from a Daytona chronograph to … a Swatch.