Opinion piece : My dude, his smart watch and me 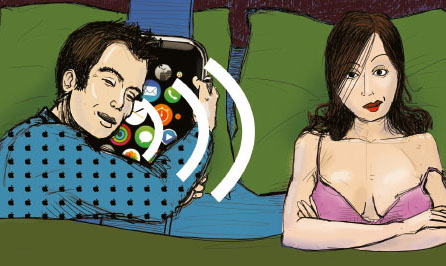 We’d totally got the picture. When the man in our life used to babble blissfully about a tourbillon, a moon phase or a minute repeater, we managed to feign interest while privately fantasizing about the latest it bag or any other “must-have”. We knew which questions to ask him and he could carry on enthusing on the topic all on his own. In short, everything was fine until the smart watch turned up. After the i-phone and who knows how many other toys for boys, it goes without saying that he needed a connected watch. There was naturally no question of buying one on a whim, as our man does his homework before taking action. So he started by undertaking said research, of which he naturally felt obliged to share the results. In the beginning it was almost interesting, but as the analysis of the performance of each and every watch dragged on for days, it became steadily less so… But not so for the man himself, who came home one evening bursting with pride over his smart watch. Thirty seconds later, he was glued to the user manual and three hours later, he was still there ! After a few dozen mutterings of “that’s weird, it doesn’t work” and “but I did what they said”, the watch finally began working. Phew! It was done and we could get back to normal. But that was not to be, because our man was right in the middle of his test phase: he took up jogging – meaning he bought the latest top-notch gear and went around the block twice ; he began paying attention to his diet, which translates into dressing-free salad and tiramisu for dessert ; and he started monitoring the quality of his sleep, implying to a total inability to walk the dog at midnight. But our man, connected or otherwise, is still our unreconstructed man, so basically all we have to do is wait. In the beginning it’s little nothings – a day without looking at his watch every two minutes, another without checking the number of steps he’s done, and finally, one morning, a good old chronograph on his wrist. Looks like we’ll have to get a larger connected-object storage cupboard.